Grading the Eagles at the quarter pole: Offensive line edition 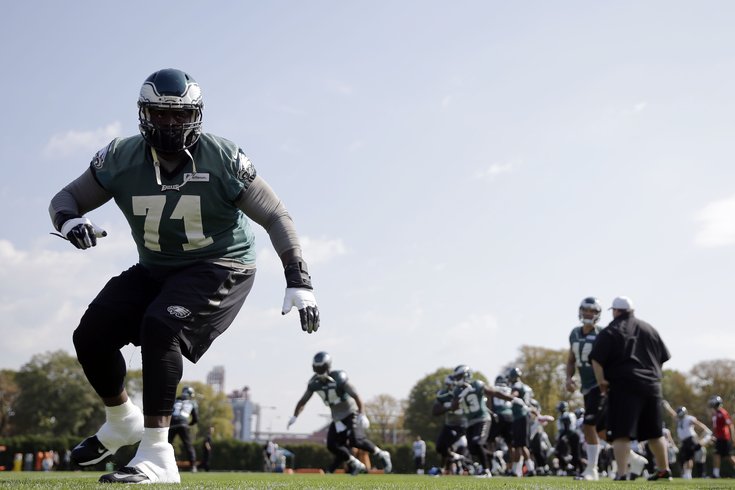 If you think the Eagles' offensive line is bad now, it can be a lot worse if Jason Peters' quad injury becomes problematic.

Continuing on with our "quarter pole" grades, we'll cover the offensive line, with "offensive" being a good way to describe their play. In case you missed the first installments of this series, we previously graded out the rest of the offense:

By comparison, here's a chart of how many offensive linemen each team in the NFL has drafted over the last three years:

The NFL average during that span is 4.125 drafted offensive linemen per team. Because of their failure to add youth to the mix along their OL, the Eagles did not have much in the way of quality depth, either in terms of young developmental players or experienced, reasonably reliable veterans.

Herremans was clearly a declining player, so his release was understandable, but Mathis was still a quality starter, even if overrated by the likes of ProFootballFocus.com.

Allen Barbre was a 31 year old journeyman with one career start since 2009, and just eight starts over the course of his career. He of course filled in at LG in place of Mathis. Andrew Gardner, meanwhile, was aging in his own right at 29, and was on his sixth team in the pros. He won Herremans' old starting job at RG in training camp and the preseason.

When you dump both guards in one offseason, you're simply not going to have any semblance of cohesion.

• The LT will not be used to playing next to the LG.

• The LG will not be used to playing next to the C.

• The C will not be used to playing next to the RG.

• And yes, finally, the RG will not be used to playing next to the RT.

It takes a long time for an offensive line to get good at blocking blitz pickups, stunts, twists, etc. The Eagles' offensive linemen hadn't logged a significant amount of time playing with the guys immediately to their left or right. That was a clear concern heading into the season, and it has shown on the field.

Gardner actually played reasonably well before being placed on IR with a foot injury. Barbre has simply not played well at all at LG. Unquestionably, the Eagles would be a better team with Mathis at LG instead of Barbre. As we detailed at length back in July, the Eagles handled the Mathis situation poorly. There's really no excuse whatsoever for the Eagles to have simply dumped him after not addressing the offensive line either in the draft or free agency. They thought Barbre would not be a significant dropoff.

Obviously, that was a miscalculation. Or something.

Otherwise, heading into the season, there was reason for optimism at the other spots. During the offseason, I can remember suggesting that the Eagles might have the best LT-C-RT combo in the NFL in Jason Peters, Jason Kelce, and Lane Johnson. That statement sounds ridiculous now, as none of them have played up to expectations.

While the Eagles' OL has pass protected well (in the first three games, anyway), the run game has been an outright mess. The Eagles' rushing attack:

As we noted earlier today, the Eagles have been awful on third down, but that has been a product of the Eagles' complete inability to run on first down:

On first downs this season, by my unofficial count, the Eagles have called 43 designed run plays. Some facts about those run plays:

• They average 3.16 yards per carry on called first down run plays.

• Eight of those 43 called runs (almost one in five) went for negative yardage.

If the Eagles cannot run the ball effectively, their offense is ruined. And the reality is, it could actually a lot worse with Peters and and Johnson both banged up.