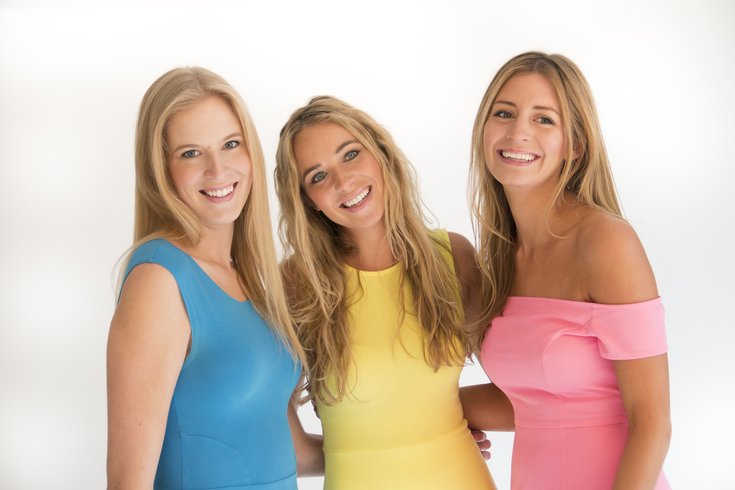 Madeline Fraser, Beatrice Fischel-Bock and Lizzie Grover co-own Graduate Hospital's ZOOM Interiors, which will appear on 'Shark Tank' on May 8.

Entering the ring for the first time as a design professional, Beatrice Fischel-Bock was nervous. It was her first ZOOM Interiors client -- a friend who had recently graduated and was, as many post-grad adults are inclined to do, getting by with little more than an IKEA futon.

Her challenge: Transform the room, located in Arlington, Virginia, without once seeing it in person.

It's that change in process that's ZOOM Interiors's selling line. The allure of the South Philadelphia-based firm is an all-online platform that bypasses time-intensive and wallet-draining space assessment and instead asks clients for a personality survey, the submission of a floor plan and photos of any existing pieces that customers want retained. ZOOM then sends a PhotoShop file for approval, containing their recommended design and a shopping list; with more funding, these services will eventually be offered through an app.

ZOOM's gamble on a streamlined design process eventually paid off in that Arlington room, says Fischel-Bock. The room, with its now shimmering white aesthetic and soft notes of floral inspiration, was received with high praise.
Fischel-Bock cites that as the moment she knew she and her co-founders, Lizzie Grover and Madeline Fraser, were truly on to something. Now, they're set to face an admittedly more difficult challenge: The inquiring minds of "Shark Tank's" oh-so-brutal judges panel. The episode, filmed in June, is set to air next Fri., May 8.
"This is about affordability and ease -- putting together, as a service, your apartment at a very low cost," she told PhillyVoice, laying out their pitch. "We say it's 'high-style with minimal effort.' We want to give the trendiest, best-looking apartment and exactly what you want without spending a lot of money."
The service is a four-step process. After the survey that accounts for personality and taste -- what magazines they read, what art they find palatable, etc. -- is a 15-minute consultation, which informs the Graduate Hospital-based company's team of five how to craft a digital design board that costs $199 per room and outlines how the space will look. (If they don't like it, Fischel-Bock says, they get two chances to revise before facing fees.) From there, the client has the option to purchase a "ZOOM Card" that lists links to affordable furniture items that match what they want. Clients do the shopping, Fischel-Bock says, but with the money from a potential investment -- from, say, "Shark Tank" -- they would aim to do the shopping themselves.
She compares ZOOM to services like Uber in how they attempt to be accessible and take the hassle out of the process. They're each a sign, she explains, of what Millennials want out of their services.
"People are buying online now -- even furniture," Fischel-Bock says. "Ten years ago, people would have said, 'Well, you have to see it first.' But our Millennial market doesn't say that."
The trio first realized this, she says, when they found themselves designing spaces virtually for friends who'd moved abroad. They've since charged -- zoomed -- forward with their remote-design idea with some sizable growth, experiencing 360 percent growth between 2013 and 2014.
The women, who graduated with degrees in interior design from George Washington University, moved to a 1,500-square-foot space in Graduate Hospital last year. She says the relocation has allowed them to "ZOOM" rooms (how they term their transformations) without the competitive pressures of markets like New York.
Fischel-Bock says their 10-year plan involves fleshing out a Martha Stewart-sized lifestyle brand that would have them selling their own affordable furniture. Because the pricing is the key to making them stand out -- that and, of course, their design intuition.
"You can make anything look good if you have the right eye," she says.