Paul Hollywood is back everybody 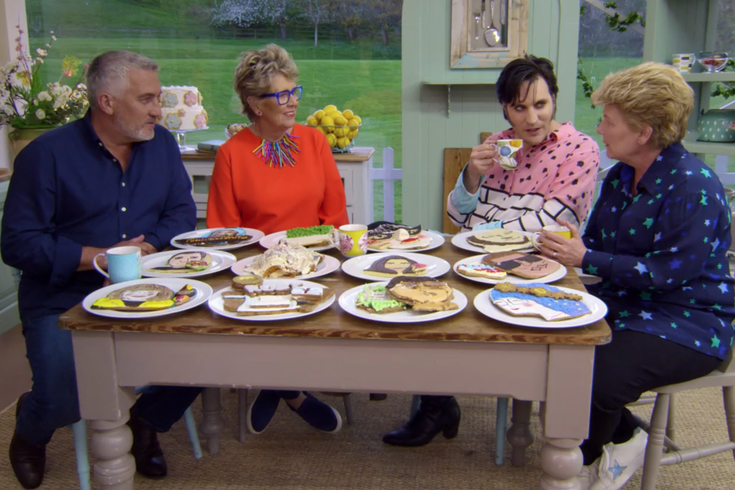 "The Great British Baking Show" introduced its sixth season on Netflix on Nov. 9.

Netflix is putting bingers in the feel-good holiday spirit these days by doing me us all a huge favor and bringing back another season of the "The Great British Baking Show."

The hit U.K. low-key baking competition is making its second showing as a Netflix-only brand with the Nov. 9 release, which went through a bit of a transition after BBC lost the franchise.

GBBO diehards were mostly pleased with the quality of the show after longtime host Mary Berry was replaced by Prue Leith and hosts Mel Giedroyc and Sue Perkinsleft were replaced by Sandy Toksvig and Noel Fielding in the August release on Netflix. Paul Hollywood is the only remaining figure.

Turns out, the heart-warming baking comraderie and challenges are still the same, and things are going quite well in its new iteration.

I am in the midst of binging the most recent season and, don't worry, there are no spoilers in this post.

Do not make the same mistakes I have in my life. If you have not finished the newest season, do not read a news story about the GBBO. I accidentally clicked on a spoiler and now I know the winner. Save yourself. (But oh, it's good.)

What I like most about this new era is that Netflix is producing quite a turnaround for fans. We're used to waiting months for new GBBO releases to appear on PBS, but this season only wrapped on Oct. 30 and was released just 10 days later. The previous season before that came out just this past August.

Plus, a holiday special is apparently in the works for Nov. 30 and the next season is already slated for early next year.