Pam, Erin, and Andy joined him on stage to try and convince him to do it 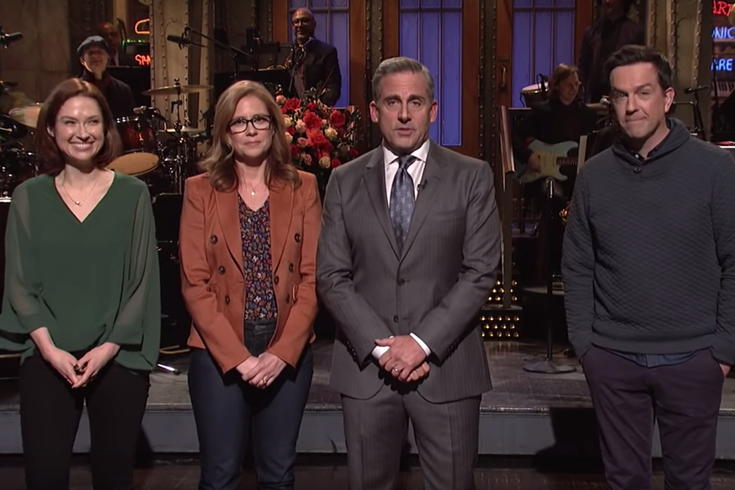 Steve Carell brought up some "Office" fan favorites during his opening monologue of SNL on Nov. 17.

Comedian giant converted movie actor Steve Carell returned to "Saturday Night Live" for his third time to host this week and it's good to see he's giving the people what they want. Kinda.

Carell's opening monologue was basically commandeered by talk of a reboot of "The Office," which fans and Netflix watchers have been calling for for years. Pam Beasley (Jenna Fischer), Erin Hannon (Ellie Kemper), and Andy Bernard (Ed Helms) all showed up during the monologue for a mini reunion to try and convince Steve it would be a great idea.

MORE: A camel showed up in Pennsylvania during Thursday's snowstorm

I mean, give the people what they want, right? Please?

His wife, Nancy, and two kids, Elisabeth and John, also showed up in the audience and told him to just do it already.

Steve, just do it already.

But Carell has been known to oppose the idea, for a variety of reasons. He told Vanity Fair that Michael Scott, his character and the star of the sitcom, is predicated on radically inappropriate behavior that might not be well received in today's climate. It's a valid point.

Also, for any of you fans out there, you'll know that the end of the sitcom doesn't really lend itself to a reboot. Without giving away too many spoilers, I"ll just say that many of the characters probably aren't still hanging out in Scranton, Pennsylvania.

Carell's monologue left it on an ambiguous note — but at the same time, there was hope. Like when there was a rumor NBC was putting something together that didn't include Michael Scott.

Nothing was confirmed on SNL but hey, nothing was denied certainly either, right?