A camel showed up in Pennsylvania during Thursday's snowstorm

We have no idea what’s happening 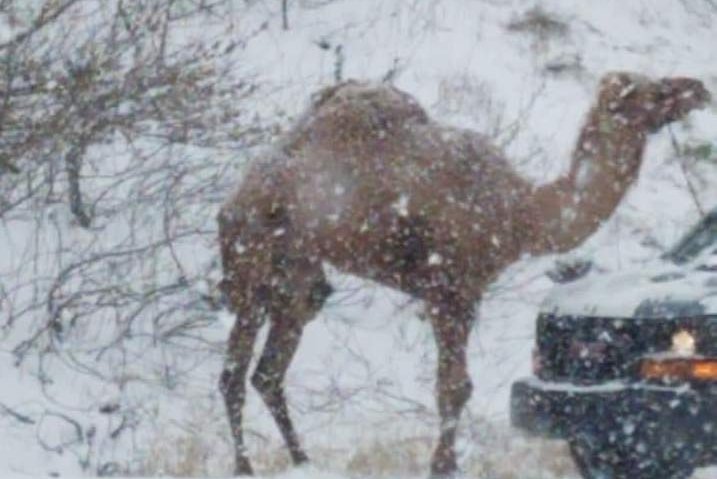 This is Snow Camel.

In case you hadn’t heard, eastern Pennsylvania had some snow on Thursday. Way more snow fell than people expected, which caused some problems on roads.

Traffic reports started rolling in from all across the state, but one stood out because of two crucial words:

MORE NEWS: N.J. couple and homeless man all conspired together for GoFundMe hoax | Tensions run high ahead of Saturday's 'We the People' Rally in Philly

Below you can find first-hand footage of Snow Camel, which Twitter user @Tylerkio said was filmed on Route 309 South near Sellersville.

Warning: language in this video is not safe for work, although it is extremely understandable:

Have you ever seen a camel in the snow? pic.twitter.com/RNBPclk5tH

We’ll be honest: the commentary in that video absolutely seems like the appropriate response to seeing a camel on the side of the road… in a snowstorm… in Pennsylvania.

Everyone was very pleased with Snow Camel:

Apparently there is a camel stuck in the snow on 309... pic.twitter.com/P7lLI9a5zO

Nbd just a camel on 309 in a snow storm 😂🐫 #wtf pic.twitter.com/a1zbelyjsR

so my mom was coming home from work and sent me this .... there’s a camel chillin on 309 in hazzy lmao pic.twitter.com/Uahu6eCtC2

Why is Snow Camel here? Unfortunately, we’re not entirely sure. Details are pretty hard to come by, because no one wanted to stop their car to ask for fear of being stuck on the roads for hours.

The Jewish Federation of Greater Philadelphia is holding a big event at the Kimmel Center this evening, and they tweeted Thursday afternoon that the camel is named Einstein and belongs to them:

This is our camel! His name is Einstein and he’s on his way to our Main Event at the Kimmel Center in Philly tonight. We have treats and a blanket waiting. https://t.co/HAz7S3DFPz

Update, 9:15 p.m.: According to the Jewish Federation of Greater Philadelphia's latest tweet, the weather prevented Einstein the camel from reaching the Kimmel Center. Einstein is heading back to the Peaceable Kingdom Petting Zoo.

Sadly Einstein the camel didn’t make it to the Kimmel Center this evening. His ride got stuck in the weather and decided it was best for him to go home. Thank you for everyone’s concern. Einstein is safe and happy to be headed home to Peaceable Kingdom Petting Zoo.

Thankfully, it seems Einstein made it through his roadside ordeal safe and sound.

One thing is for sure: until further notice, Snow Camel is the mascot for this winter.