Will the 'silent majority' merely celebrate the Constitution? Will Proud Boys and Antifa brawl? There's a lot of talk and many questions 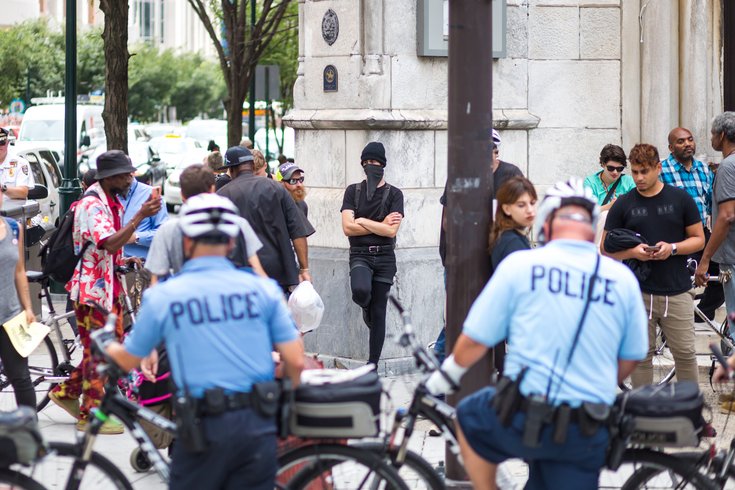 Protesters at the intersection of Broad and Arch streets, demanded an end to the police stop-and-frisk program and called for the Berks County Residential Center, a family detention center operated by ICE, to be shut down, Tuesday, July 31, 2018.

Will Saturday see the self-described "silent majority" rally in Old City at an event to "celebrate the Constitution," or images of a potential showdown between hate groups and those who've banded together in a loosely collective effort to push back against them?

That answer probably won't be clear until the “We The People” rally gets under way near Independence Mall at 11 a.m. As things stand, though, it all depends on how you view the current state of the union.

What's already become evident is counter-protesters are preparing for the worst, and getting word out about what they think will happen. Meanwhile, rally organizers maintain that the other side couldn't be more wrong about why they're coming to Philadelphia.

Zach Rehl, a local right-wing organizer who runs the group "Sports, Beer & Politics," said he expects the event to draw about 80 people. Organizers for the  "PushBack" event, who saw their Facebook page temporarily removed this week, are hoping for a substantially bigger turnout.

"It's hard to tell how many people are coming," said Max Kistenmacher, PushBack's press liaison. "We expect hundreds and hope for thousands."

Three days out, some 570 people have signed a petition titled “No White Supremacists in Philly!” which calls on the city and the National Parks Service, which has jurisdiction over the site, to “stop this demonstration.” That sentiment has been echoed in stories online and social media streams calling into question the organizers’ repeated stance that hate or violence will not be welcome at the event.

"ITS TIME TO SHOW PHILLY WHAT PATRIOTISM REALLY IS!!" it continues. "It is far beyond time to make a stand and let our voices be heard. To (sic) many times our voices are drowned out by the voices on the left. We need to be louder, we need to be stronger. We will let them know that their violent tactics will not keep us down or scare us away. The Silent Majority must make a stand now!!! This is our time!! This is our day."

On November 17th, white supremacist organizations from Proud Boys to Three Percenters will *attempt* to march in Philadelphia. The Gritty Army says no. Be there for the #Pushback pic.twitter.com/aPQ8LxZgye

“As far as any actual ‘hate groups,’ I am not aware of their planned attendance,” Rehl told PhillyVoice this week. “If anyone thinks this rally is a platform to display hate or intolerance for any group, then they have the wrong idea for what this event is about and we ask they stay home to avoid any issues.

“We have done everything we could to assert the fact that this is a rally to celebrate and honor our constitution, so any display of hate is not tolerated and they will be asked to leave the area.”

An Antifa-aligned counter-protester who participated in events related to the Democratic National Convention and, among others, an appearance by conservative personality Tomi Lahren in Glenside doesn't buy that explanation.

He said there have been many changes in the "tone and nature of Philly activism since the DNC," which means it's shifted from passive to in-your-face. Saturday will be a test of how that's gone, he said.

"We’re known to be a place where Nazis aren’t welcome, and that’s because of our consistent turnout to shut these things down," said the protester who identified himself by the pseudonym Dave Adams out of fear for his safety.

He questioned the organizer's "no hate or violence message," in claiming that the "head of security" is aligned with a Proud Boys group painted as white supremacists by their detractors and a diverse all-male group by itself. (Organizers did not immediately respond to that accusation on Wednesday.)

"It’s been a while since any group of fascists and racists ... have made a public push for ground like this," he said. "It will be a good measure of the state of both the fascist and the antifascist movement in this city."

"I don't think the Proud Boys are what the media makes them out to be due to my research of their website and their diverse members." – Zach Rehl, local right-wing organizer

To that, Rehl responded that the group is misunderstood.

"I don't think the Proud Boys are what the media makes them out to be due to my research of their website and their diverse members," he said. "I was told they were told to stand down."

During an appearance on WPHT 1210AM's Dom Giordano show, Rehl said the event won't involve a march but offer a chance for conservative voices to be heard. He also noted that the pushback will be "kind of hilarious that they're making such a big stink out of it" if no members of the Proud Boys group attend.

"These guys are out there every other day protesting everything," he said. "Donald Trump could get two scoops of ice cream and they'd be protesting. People are so fed up about it. They're tired of being silenced by Antifa."

Of the online criticism of his event and possible attendees, Rehl said he's been made aware of them but is "not in chats with any of these people. I'm old school. I use the phone."

"Since the event was created, there have been hordes of fake profiles being made by people impersonating myself or others to troll the event, or to smear my name and tie me to people," he said, sharing screenshots of two such posts. "Granted, they are funny sometimes. Other times, they are threatening in nature. Nonetheless, I would take what they are posting with a grain of salt."

One counter-protester, Brian Villa, questioned similar statements that Rehl made to a local newspaper several weeks back.

He cited one organizer, who's been named on Hate Trackers, for having a role in "rallies that attract 'alt-right' figures, 'Proud Boys members, and people who bring flags that mimic Nazi World War II battle flags."

"Supporters' internet comments call for a 'strong showing'; bringing knives, guns, and 'whip[ping] some' butt; 'no more standing down' (a military inactivity reference); and, that attendees 'come... to crush,'" Villa wrote. "Superlative security measures are required.

"Given our keen knowledge here, all this is necessary for their First Amendment right to peaceable assemble."

A spokeswoman for the National Parks Service confirmed on Wednesday that a permit has been issued for the rally, which moved from an earlier location at Washington Square Park.

Though the Facebook event listing says the location is near Third and Walnut streets, Rehl publicly announced on the radio that they'll set up near Sixth and Market streets, an area which will already be closed down to vehicular traffic for the Philadelphia Half Marathon scheduled for Saturday.