Are the 'Proud Boys' coming to Washington Square Park next month? 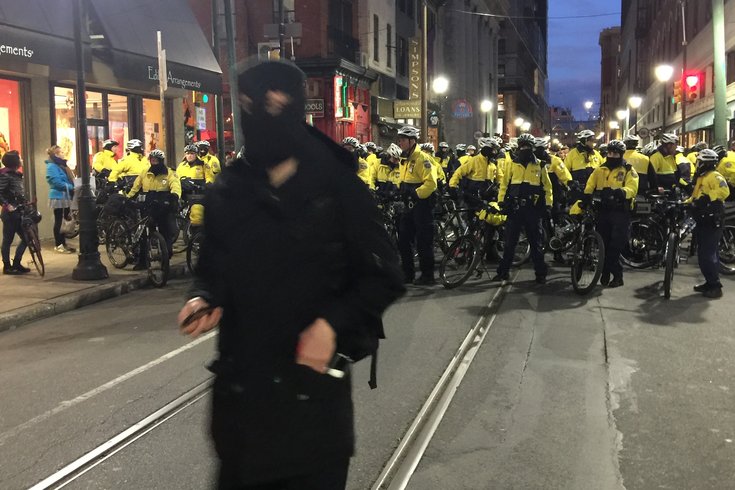 A masked protestor remained behind after a police line held against marchers trying to get to the Loews Philadelphia Hotel during January 2017 protests in Center City Philadelphia.

If all goes according to schedule – which it possibly won’t – Saturday, November 17 is shaping up to be the day that the “Proud Boys” meet Gritty.

The “Proud Boys” have gotten quite a bit of attention since the arrests stemming from a New York City brawl between members of the all-male, far-right white-nationalist group and their Antifa foes earlier this month.

Through a Monday post on Reddit Philly comes word of a “Pushback” event, featuring a photo of the Flyers new mascot above the words “stand against the ‘Proud Boys’” on November 17, 2018.

The post labels them as “far-right groups with ties to Neo-Nazis” who are coming to town to “provoke and attack people on the streets who they deem to be unworthy of their far-right, fascist vision of the country.”

“We are urging that people recognize the seriousness and danger of this situation, and come out to oppose them,” reads the flyer sharing details of the 11 a.m. Washington Square Park event which lists the PushBackCampaign’s twitter account and email.

WARNING: There is violence and profanity in the video embedded below.

Meanwhile, over on Facebook, the Proud Boys event is billed as a “We The People Rally.”

“We the people have been silenced for to (sic) long. It is far beyond time to make a stand and let our voices be heard,” the event announcement shared by Facebook user Holly Delcampo reads. “To (sic) many times our voices are drowned out by the voices on the left. We need to be louder, we need to be stronger.

“We will let them know that their violent tactics will not keep us down or scare us away. The Silent Majority must make a stand now!!! This is our time!! This is our day. … ITS TIME TO SHOW PHILLY WHAT PATRIOTISM REALLY IS!!”

It also warns that organizers of the event (it could be moved if permits aren't secured) do not condone violence and those who resort to such actions will be "removed from this event immediately."

Consider yourselves forewarned about what could be coming your way, Washington Square Park neighbors.