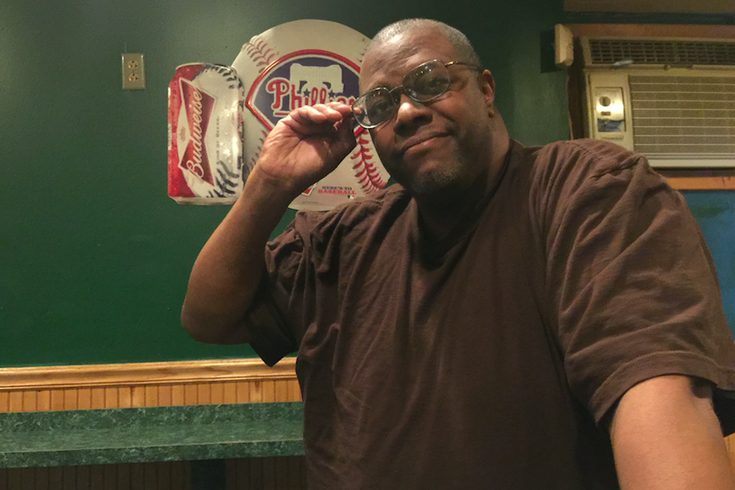 Daryle Lamont Jenkins has made a name for himself 'doxxing' white supremacists through his 'One People's Project' effort.

To many white supremacists, Daryle Lamont Jenkins is Public Enemy No. 1.

That’s because the 48-year-old New Jersey native with substantial ties to Philadelphia has made it his life-calling to confront them through the One People’s Project.

Through that 17-year-old effort – which operates under the “Hate Has Consequences” mantra – Jenkins has time and again put white supremacists of all varieties on blast by making their identities known publicly.

It’s gotten to the point where people hide their faces when they see Jenkins (and his camera) on the scene.

Jenkins is far from an unknown quantity. He’s been profiled on Wired, The Daily Beast, The Fifth Column and in the Los Angeles Times. He’s also appeared in a Rachel Maddow Show segment that started with footage of him in a face-to-face confrontation with the late Andrew Breitbart.

When he met up with PhillyVoice at a Bridesburg pub on Tuesday, he was armed with a depth of confidence that belies an expertise not only in his educated narrative, but a belief that he’s on the right side of history.

“My agenda is fighting what’s wrong,” he said. “I know I’m winning.”

The focus of the interview – it lasted more than an hour in a watering hole where he was noticeably the only person of color – wasn’t exclusively about his path to a level of notoriety that’s arguably never been more important than it is today.

“As far as Philly’s concerned, we’re good. We were able to chase out the Nazis. But we gotta stay good." – Daryle Lamont Jenkins

Rather, he spoke about a nation’s precarious times, what drives him to continue these efforts, his experiences at last Saturday’s Trump march/counter-protest dust-up (including a single moment he regretted) and how he and his supporters are on a path toward inevitable victory.

“My job is always going to be to look for the bona fide fascists,” said Jenkins, who is part of the Antifa movement but doesn’t wear a mask because his recognizable frame renders moot any attempt to conceal his identity. “They know who I am. Once you get to the point where they’re writing songs about you – a group called AC Skins wrote a song called 'Dirty Daryle' – you don’t hide.”

On Saturday, he got to Independence Mall early – before people on both sides put their masks on.

That included both someone he’s come to know as a “neofascist” who posed for photos with a black-conservative speaker that day, another march attendee who said “I think free speech is overrated” and “a guy wearing an anti-Antifa shirt (who) started masking up when I hassled him a little bit.”

True to his modus operandi – uncovering the backgrounds of those he’s deemed to be white supremacists and neo-fascists – Jenkins later learned that that “coward” was a graduate student at Penn State University.

OPP proudly shares those identities online in a “doxxing” action that’s sometimes frowned upon by outsiders. (That grad student’s name will appear in the story Jenkins said he’s currently writing about the protests).

He noted that he thought some marchers came prepared to brawl.

“They were ready to fight people. ‘Mr. Free Speech is Overrated’ was wearing those lead-lined gloves,” he said. “People gotta stop acting like Antifa’s the only ones running around looking for trouble. It started with them as we saw during the campaign, punching people at protests with (Donald) Trump egging them on. Now that they’re on this kick where they’re going to have pro-Trump rallies, it’s only going to get crazier."

Jenkins has seen a shift in his foes’ confidence since November. And he rues the lack of Democratic Party pushback.

“Once he became president, all bets were off,” he said. “We saw the Nazis coming out of the woodwork to begin with, but when Trump actually got into the White House, that’s when everything said, ‘OK, we’re on top. We are in charge.’ The rest of us said, ‘OK, no you are not. Our grandfathers fought you in World War II. You are not supposed to come back. So, how do we stop you?’”

He said he wonders whether those he targets are intent on tearing the very notion of a country down in a push away from national control. That puts them in direct odds with Americans who want to raise families in a stable environment.

In that dichotomy, Jenkins takes a modicum of comfort in the fact that “D.C. doesn’t like to be effed with,” meaning the establishment will push back against Trump as it did when the administration tried to bully Republican legislators into backing the health care reform bill.

As for why he launched the OPP effort in 2000, he said he sensed a societal shift even then. The Internet – which enables a level of information-sharing like none before it – helped substantially.

“No one likes to talk about racism, which means no one’s going to talk about the people who are responsible for racism, and they’re most certainly not going to be honest about it,” he explained.

With the Internet, he continued, “I could put all the information out there and let people take it all in. It keeps me away from doing propaganda because I don’t have to lie. I just have to put the story out there and people can judge for themselves.”

I asked Jenkins to zero in on the issue, and prevalence, of white supremacy in and around Philadelphia.

“Let me explain it to you like this: I’m from Jersey and there wasn’t much going on in Jersey. I had to go to where the work was. So, I went to Philly (in 2005),” said Jenkins, who gathered intelligence in part by going to court when alleged members were facing charges, or scoping out ‘Leif Erickson Day’ rallies. “When I first came here, there was a lot going on with the Keystone State Skinheads.

“There were bricks thrown through my windows, which was ironic because my landlord was one of their lawyers. The funny thing is that person is no longer involved with KSS, so we’re at that ‘drunk, I love you, man’ phase of our relationship now.”

He said that presence has somewhat shifted out of Philadelphia in his time here. When the couple that owned a Tacony home that doubled as the group’s “clubhouse” moved out to Harrisburg – after an OPP rally in that Northeast Philly neighborhood – many local members followed their suburban move.

“KSS’s presence over the past several years has died down significantly,” he said. “There’s still members of KSS living in the city, but their activities are outside of it. The flipside of that is now we’ve got the so-called Alt-Right here and that’s what we’re dealing with now.”

"We got a nice little bumper crop of Nazis that we have to deal with thanks to the Trump rally." – Jenkins

He explained how that manifested itself on a Saturday when he sensed the opposition's presence at a rally not wholly populated by them.

“This weekend, we got a nice little bumper crop of Nazis that we have to deal with thanks to the Trump rally,” he said. “Even if we didn’t have the intel on the folks we were looking for Saturday, I’d have been able to pick them out. I would know by the things they were saying, the way they held themselves, mannerisms, certain terms you hear in the white-supremacist movement.

“I did a little faux pas when I was marching with the Antifa crowd. One guy on the side of the march, screaming ‘You guys are commies!’ was wearing a Pepe le Frog tie so I just reached over and grabbed it.”

When I asked where everything goes from here, Jenkins offered a bold statement.

“The Alt-Right isn’t long for this world,” he said, noting that younger members realize the difficulty of passing background checks with OPP disseminating word of their involvement. “They’re gonna be looking for a job and (employers) will say, ‘Oh, you were one of these characters? We’re going to go in another direction.'”

He rued the fact that he wasn’t familiar with the name James Harris Jackson before he traveled to New York City and murdered 66-year-old Timothy Caughman with a sword on a mission to kill African Americans. He noted the sheer frustration of the victim’s criminal record being made public, but not his killer's hate-group affiliation.

“If there’s any kind of worry, it’s that they lash out like that now,” he said. “We have to maintain some vigilance against it. We can keep it from happening, but if it doesn’t, folks on our side are prepared to dance. That’s what Antifa does.”

'THIS IS DANGEROUS WORK'

Jenkins is willing to delete doxxing posts if the subjects can prove they're no longer part of that movement, and has done so on numerous occasions.

“It takes time,” he explained, noting that the action is supposed to make their lives uncomfortable in the first place. “We just gotta know for sure that you’re not part of it anymore, that you’ve had a sincere change of heart. It takes a lot to want to call me anyway.

“We have an open line, but understand I gotta do what I gotta do. Everybody’s human. Everybody’s out there trying to figure out how to get through life. I understand that. But that’s not gonna matter much if you’re hurting somebody.”

His targets are intimidated, he says.

“They’re scared because they know what’s going to happen whenever I put their information out there,” he said, but there is a caveat. “Somebody asked me who is the most dangerous fascist I can think of. I said, ‘The one I don’t know. The ones whose names we don’t know; whose faces we don’t know.’ They’re doing some damage now. So long as that’s the case, they are always going to be a threat, which is why One People’s Project does what it does.”

Sure, there’s a constant fear in the back of his mind that the bad guys will track him down and seek retribution.

“They're some very dangerous people," he said. "This is dangerous work and not something that everybody can do.”

I asked if he’s optimistic that his side can win a battle that’s taken a lot out of him personally.

“I have to be. What’s the sense of fighting if you’re not?” he instantly responded. “If we’re going to maintain our society, we gotta keep the propagandists and hatemongers from getting any kind of leg up on us. We have to be vigilant against them. The only way you can do that is with information and, more often than not, we provide that information.

“As far as Philly’s concerned, we’re good," he added. "We were able to chase out the Nazis. But, we gotta stay good. We gotta keep on 'em. We did good work on Saturday.”