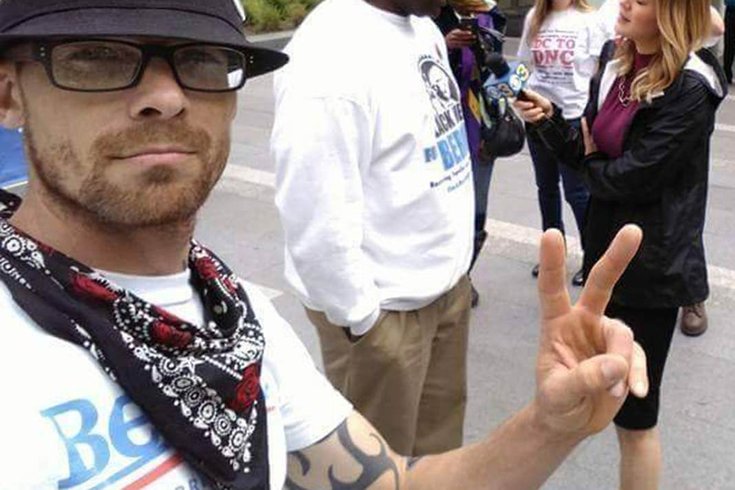 Billy Taylor, a 31-year-old landscape business owner from Northeast Philadelphia, is the permit holder for many protest/demonstration areas when the Democratic National Convention arrives in town in late July.

Billy Taylor is a 31-year-old single father of two who owns a landscaping business in Northeast Philadelphia.

He also finds himself in the middle of evolving discussions about how protests will be conducted and handled when the Democratic National Convention comes to Philadelphia next month.

His name is on four of the six city-issued permits for protest "zones" in FDR Park, somewhat-near the Wells Fargo Center, along with others in Center City and Independence Mall. To hear Taylor tell it, as PhillyVoice did on Wednesday, it was all a matter of timing.

While he self-identifies as a long-time activist in the city, Taylor admitted that the size and scope of this effort far exceeds anything he's done in the past.

“I was the first to apply for a lot of different areas because I noticed way before anybody else did,” said Taylor of the protest permit-application process through city and federal agencies. “I outwitted a lot of people. The [Bernie] Sanders campaign. The [Hillary] Clinton campaign. The main reason I applied [more than six months ago] was to ensure no Hillary supporters would [get the permits.]”

Taylor, a vocal Sanders supporter, is aligned with the upstart group Philly.fyi which considers its mission statement to “assist all of the disparate organizations around the country who are holding events before, during, and after the Democratic National Convention.”

While other groups are champing at the bit to get access to those four FDR Park protest zones, including the Sanders campaign itself, Taylor noted that the events with which he’s aligned aren’t protests, per se, but to support the group’s expressed purposes and put the Democratic Party itself on blast. Even if they have to do so  far away from people entering the building.

“There will be no violence. It’s a peaceful revolution,” he said, noting that “my advisory team is all from the 1960s so it’s a major advantage. In the '60s, there was no older generation there to mentor, to show them the ropes. Not only do we have the older generation now, but we have technology and Bernie showed us how to” spark a national campaign with limited funding.

The planning process has not always been smooth, he said, even though there has been some cooperation between the sides. While they’re working with city officials to talk about protection, safety and other issues, he noted that the city canceled a meeting with the group on Wednesday.

“It’s beyond frustrating,” he said, noting that the group has been asked to join a lawsuit over protest restrictions. “That’s still a possibility. We’re happy they offered [some help], but they’re passing the buck onto us about medic tents, water stations and cooling stations. Why are we battling with the city? We’re not going to stand for it.”

Taylor said he remains concerned about a replay of the 2000 RNC Convention “puppet warehouse” arrests.

“With four weeks to go, we’re wasting a lot of time but there are a lot of questions that we still need to get answered,” he said. 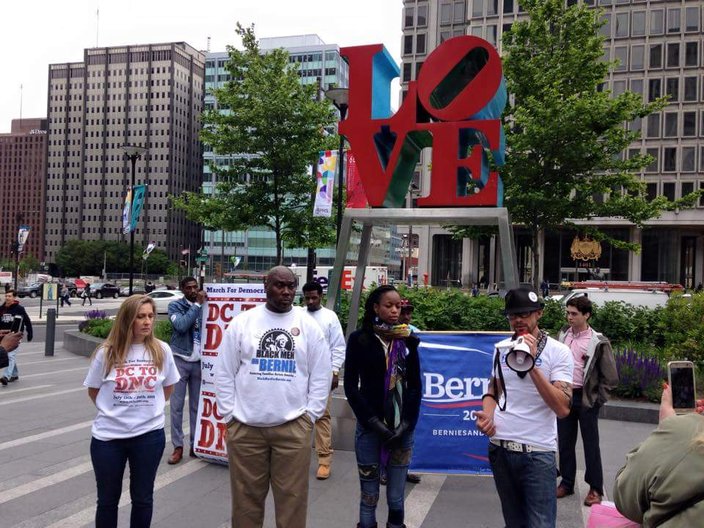 Billy Taylor speaks during an event outside Philadelphia's City Hall in advance of the Democratic National Convention. Taylor was issued several permits to conduct demonstrations in late July.

Philly.FYI – which will reach out to other grassroots groups in its mission to reclaim the Democractic Party – has already signed on with a “deregistration” effort broached last week at the Black Men for Bernie and Philadelphia Coalition for REAL Justice press conference in North Philadelphia.

That effort will take the form of a unique march from Center City to the Wells Fargo Center.

“We’re going to carry a coffin from the heart of the city to the convention filled with [documentation from those who deregistered from the Democratic Party],” Taylor explained. “It’s not only a ‘Bernie or Bust’ thing. They’re using fear tactics, but we’re not going to vote for a demon called Hillary because the other choice is a devil named Trump.

“Even if people deregister, they can still vote for the demon of their choice, but we’re going to make it very clear to the Democratic Party that we’re not going to take it anymore. We don’t care if they count [the registration forms] or even look at them, but they’ll know we are out of here because they’ve lost our respect. Respect is earned, not taken, and they absolutely have to earn our respect back. While we’re here in mass numbers, we’re going to lead a political revolution of our own. We’re going to take the power from the party and give it back to the people.”

And many revolutionary battles, many of which are listed on the group's website already despite lingering logistical uncertainty, will take place on land for which Taylor holds the permit for up to 30,000 people to make their voices heard in FDR Park, Independence Mall and Thomas Paine Plaza.