Comcast fires employee with alleged ties to Proud Boys, We the People Rally 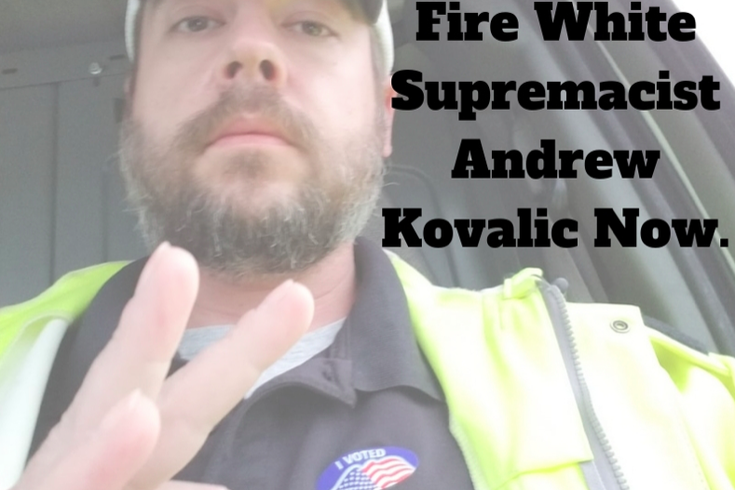 Brian Kovalic, a former Comcast employee, was let go by the company after his alleged links to a white supremacist group were exposed.

Days before an alt-right rally in Philadelphia, Comcast has fired an employee who was linked to the "Western chauvinist" Proud Boys group and had been scheduled to assist with security for the potentially contentious event.

Comcast responded to a petition from the Philadelphia-based Media Mobilizing Project, which cited evidence that employee Andrew Kovalic was associated with the Proud Boys.

RELATED: Tensions run high ahead of Saturday's 'We the People' Rally in Philly

Kovalic was pictured in a Twitter thread flashing a hand symbol for the Proud Boys, an all-male, white nationalist group that has been deemed to be a racist and misogynistic hate group by the Southern Poverty Law Center.

THREAD: The Proud Boys and other alt-light groups are rallying in Philadelphia on 11/17.

He works for @comcast. Here he is making a white power gesture in his Comcast uniform. pic.twitter.com/TC84L290YD

Pictured in a Comcast uniform, Kovalic is allegedly the rally captain of the Proud Boys in Harrisburg. Screenshots of Kovalic's comments on the Facebook page for Saturday's We the People Rally, which is scheduled to take place outside the Independence Visitor Center in Old City, show that he "liked" an antisemitic remark

In light of the petition, Comcast released a statement announcing that the employee in question is no longer with the company.

Wanted to share our statement on this: There’s no place for disrespectful, offensive behavior in our culture. The individual is no longer employed by Comcast. -Gabbie

Tensions are running high ahead of Saturday's protest, an 11 a.m. gathering that organizer Zach Rehl claims will not welcome racist or violent groups.

“If anyone thinks this rally is a platform to display hate or intolerance for any group, then they have the wrong idea for what this event is about, and we ask they stay home to avoid any issues," Rehl told PhillyVoice this week.

The Facebook page for the rally, organized by Patriot Events and Sports, Beer and Politics, includes a disclaimer that racism and hatred are not welcome.

"This event is for all Patriots, Militia, 3%, constitution loving Americans, pro good cop, pro ICE, pro law and order, pro life, pro American value, pro gun and anti illegal immigration. ... Will you stand with us? ITS TIME TO SHOW PHILLY WHAT PATRIOTISM REALLY IS!!" the event description says.

A pushback event is scheduled to coincide with the We the People Rally on Saturday. More than 800 people have signed a "No White Supremacists in Philly!" petition calling on the city and the National Park Service to stop the demonstration.