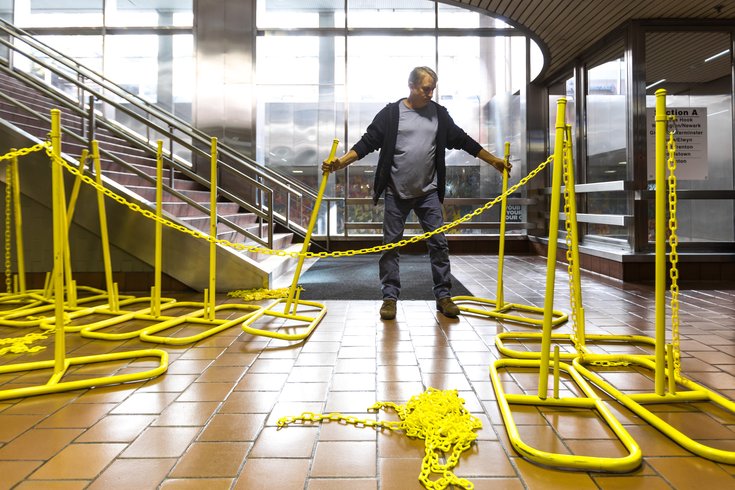 A SEPTA employee arranges stanchions at Jefferson Station on Tuesday, Nov. 1, to control an increased number of commuters using the Regional Rail lines.

Six days into a SEPTA labor dispute that has crippled public transportation in Philadelphia, a group of local activists plans to hand out "Inconvenience Passes" to commuters affected by the work stoppage.

The protest, organized by leaders of the Philly Coalition for REAL Justice, an affiliate of Black Lives Matter, will take place Monday morning outside SEPTA headquarters at 1234 Market Street in Center City.

In a release, protesters took a firm stance against SEPTA management.

"Several concerned community and worker organizations demand that riders be compensated for the lost access to transportation during the strike," the protesters said. "SEPTA management needs to be held accountable for neglecting to address worker needs in a timely manner. If formal steps are not made to negotiate with riders and provide free rides, these passes will be used in lieu of fares once service is restored."

Protest organizers contend SEPTA intentionally stalled negotiations with Transport Workers Union Local 234 for two years in order to use public inconvenience from a strike to force the sacrfice of workers' demands.

"The honoring of Inconvenience Passes is the first of many steps towards workers building better relationships with riders," the group said.

Negotiations remained stalled Saturday night and into Sunday after a Philadelphia Common Pleas Judge denied SEPTA's request Friday for an injunction to end the strike, which has suspended service on the city's subways, buses and trolleys. Judge Linda Carpenter said she would revisit the request Monday amid fears that the strike could prevent voters from reaching their polling stations on Tuesday.