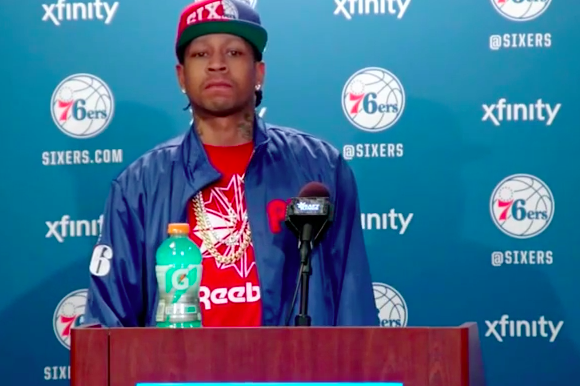 For the first time since his induction into the Naismith Basketball Hall of Fame, Sixers luminary Allen Iverson spoke to Philadelphia reporters Friday in a characteristically revealing and inspired press conference.

At 40 years old, A.I. still looks like the same guy who took the league by storm in 1996, an accelerated particle whose charming grit drove interest in an NBA that badly needed another Michael Jordan to embody its heart and soul for a new generation. In Philadelphia, he was an instant sensation, but his presence on the court ignited the world night after night for more than a decade. He never claimed to be perfect; great was enough for him for the longest time.

More than anything, Iverson said Friday that becoming a Hall of Fame player was straight-up hard work. Now, he says, after achieving basketball's highest honor, he wants to carry that over to other dimensions of his life: fatherhood, partnership, friendship, mentorship, legacy.

"I had to go out there and break bones, over a hundred stitches in my face playing the game," Iverson said. "But this is a tribute to everybody that helped me accomplish it. My family, my friends, fans. Everybody that stuck with me through my ups and downs."

One reporter asked Iverson to recall his best memory on the court.

"The court? The court?" Iverson asked. He spoke just as he did when he famously repeated the word practice, with the shock of a conviction so set in stone he has to double-take when it's prodded. "The dance floor," Iverson said. "Just the floor."

"One of my favorite memories would probably be when I put my hand up in my ear, on that side of the court, the response I got from doing it...that sent chills all through my body because I knew they felt like I was feeling. They were excited like I was."

From teasing to tears in a matter of seconds, the best moment may have come when Iverson joked about his transcendence of the basketball court.

Iverson and the rest of the 2016 Hall of Fame Class will officially be inducted in Springfield, Mass., on September 9, 2016.