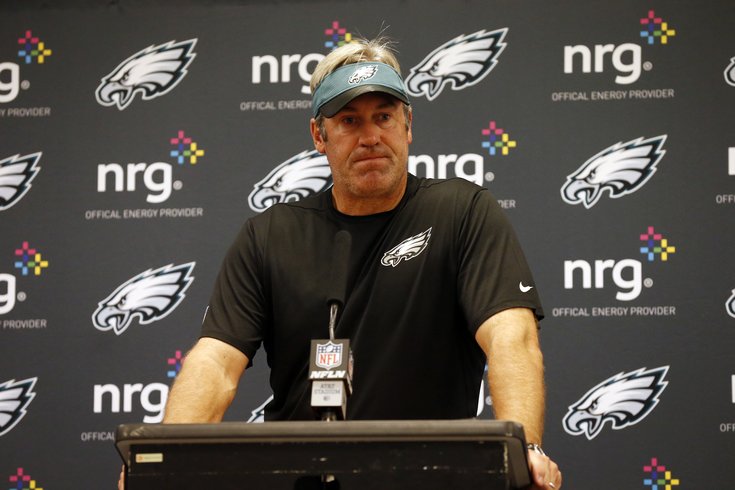 This was not Doug Pederson's finest night.

The Philadelphia Eagles had a road win within their grasp, only to see it slip away because of some egregious errors both by players and the coaching staff. To note, the words you'll read henceforth are going to be unkind to Doug Pederson. Please be aware that they are to be premised with the undeniable truth that on the season as a whole, Pederson has done a very good job in his rookie season as a head coach.

On 3rd and 8 with a little over seven minutes to go and a seven-point lead with the ball at the Cowboys' 30-yard line, the Eagles looked like they were about to take a two-score lead. Even if they didn't pick up a first down, they would have had a manageable field goal attempt with a hot kicker.

The one thing they absolutely could not afford in that situation was a negative play. And that's what they got. Pederson called a swing pass that was gobbled up six yards behind the line of scrimmage, knocking the Eagles back to the 36, presenting a much more difficult field goal attempt.

OK, so now it's a 53-yard field goal attempt. No big deal. Caleb Sturgis not only hit a 55-yarder earlier in the game, but he did it twice because Jason Garrett tried to freeze him. Both of those attempts were no-doubt-about-it kicks with plenty of distance.

As long as we're on the topic of the kicker, Sturgis has been outstanding this season. He's 14 of 15 (93.3 percent), and has not missed a field goal attempt since Week 1 against the Browns.

...which makes the decision not to let him try a 53-yard field goal all the more maddening.

Last week we awarded Pederson the "Big Balls Doug" Award. And he was happy about that. See?

At the end of regulation, after sacking Dak Prescott, setting up a 3rd and 20 with just under 30 seconds to go, the Eagles opted not to spend one of their three timeouts, and the Cowboys happily let the clock run out.

The Cowboys were almost certain to just run a give-up play there, when the Eagles could use timeout No. 2, and force a punt.

At that point, anything can happen -- bad snap, blocked punt, big Darren Sproles return, shanked punt out of bounds because they're afraid to kick to Sproles, some kind of face mask or other personal foul call on a return, etc etc. I could list things endlessly.

JUST DON'T LET THEM RUN THE CLOCK OUT!

5) The Enough is Enough Award: The Eagles' receivers

Pederson and his staff get asked quite a bit about dropped passes, which is really just an exercise in futility. Drops were a major issue last year, and they have persisted in 2016. There's very little the coaches can do at this point. You can either catch or you can't. And the Eagles can't.

While Jeremy Maclin was a very good receiver for the Eagles, particularly later in his Eagles career, he would often have the habit of going to the ground on his own, for which he earned the Self Tacklin' Jeremy Maclin Award.

That award now goes to Zach Ertz, who has one career broken tackle.

Zach Ertz is not the second coming of Mark Bavaro.

7) The Fourth Quarter Fumble Award: Every running back except Darren Sproles

Last year, Kenjon Barner had an inexcusable fumble in clock-killing time against the Patriots. Earlier this season, Ryan Mathews had two such fumbles against the Lions (which was the biggest reason the Eagles lost that game), and against the Vikings. Against the Cowboys tonight, rookie Wendell Smallwood got in the game for one carry in the fourth quarter and fumbled.

The receivers can't catch the ball the backs can't hold onto it.

8) The No Vertical Threat Award: The Eagles' offensive

It's pretty clear why rumors are swirling that the Eagles are interested in a deep threat guy like Torrey Smith – they have absolutely nothing in the way of a wide receiver who can stretch the field.

Also, they drop a lot of passes. Did we mention that yet?

With just over three minutes to go and the Cowboys driving for a game-tying score, Jim Schwartz sent Malcolm Jenkins on an effective blitz that got Jenkins a free run at the quarterback. Dak Prescott cut to his right, but Jenkins was able to stay with him, forcing a terrible throw/decision. Leodis McKelvin had a chance to pick it off, but could not make the play.

Next play: Dez Bryant touchdown. If you don't make the plays that are presented to you, you lose.

Yeah, that kid can play. #Analysis.