Eagles finally have stability at quarterback 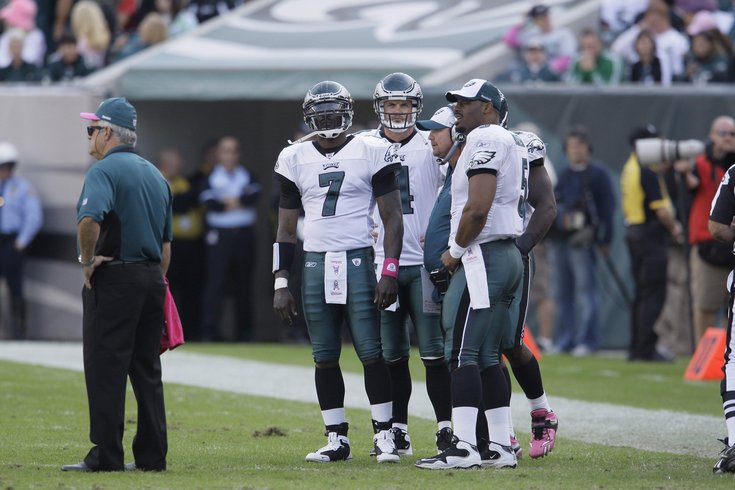 The Eagles have had a lot of opening day starting quarterbacks since the Donovan McNabb era.

Four the fourth time in as many years, both the Philadelphia Eagles and Dallas Cowboys will start a different quarterback when they take the field tonight in Dallas on Sunday Night Football, as pointed out by Sean Kane of CSN Philly.

For the Cowboys, they've have different starting quarterbacks because Tony Romo has not been able to stay healthy. For the Eagles, it has been a result of extreme quarterback instability. Since 2009, the Eagles have started six different quarterbacks on Week 1:

During that span, the most stable quarterback situation the Eagles had was when Vick was the starter, and even then, there was always the likelihood that he would miss games at some point during any season because of his slight build and style of play.

Here is how the Eagles' quarterback instability compares with the rest of the NFL. Below is a list of every team in the NFL, and how many quarterbacks they have started Week 1 since 2009:

If you'll notice, the teams at the top of the list above were mostly among the best teams in the NFL since 2009, while the teams at the bottom... weren't. When you're building a roster, you either have a quarterback or you don't. And if you don't, you face a major handicap.

The Eagles paid a hefty price to trade up to draft Carson Wentz this past offseason. As a reminder, this was the cost:

Many criticized the move, but the reality is that you simply aren't going to win without a quarterback unless you have a defense like the 2000 Ravens.

The Eagles of course later recouped that 2017 1st round pick when they traded Bradford to a desperate Vikings team that lost Teddy Bridgewater for the season with a gruesome leg injury.

While Wentz is coming off his worst performance of the season against the Vikings last week, he emphatically looks like a legitimate franchise quarterback, running an offense that has not been dumbed down, and putting up impressive numbers despite an incomplete offensive line and far below average skill position players.

Expect the Eagles to be one of the teams near the top of a list like the one above over the next decade.