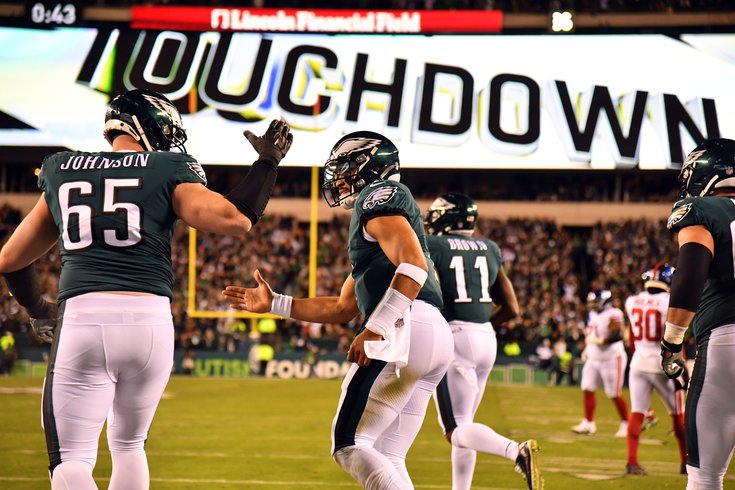 If Lane Johnson and Jalen Hurts are (mostly) healthy, the Eagles are the best team in the NFL.

After putting a 38-7 spanking on the New York Giants on Saturday night, the Philadelphia Eagles are headed to the NFC Championship Game. As always, win, lose, or tie, we hand out 10 awards.

In the lead-up to the Eagles' first playoff game, it was unknown how much Hurts' sprained shoulder and Johnson's adductor injuries would affect their play.

Hurts was clearly not himself in the Eagles' Week 18 win over the Giants' backups, and Johnson was playing in his first game since suffering his injury against the Cowboys Week 16.

Both star players appeared to be fine. Hurts completed 16 of 24 passes for 154 yards, 2 TDs, and 0 INTs, for a passer rating of 112.2. He also ran 9 times for 34 yards and did not seem affected when he was hit. Meanwhile, Johnson helped open gaping holes in the run game.

"He's a warrior," Hurts said of Johnson, "and it looks like he came out of this thing clean."

The Eagles ran for 268 yards on the night, divided like so:

It became clear on the Eagles' third drive of the game that the Giants had no answer for the Eagles' rushing attack. That drive went like so:

Gainwell had his best game as a pro, as he ran hard, picked up a bunch of key first downs, and capped the blowout with a 35-yard TD run.

.@KENNETHGAINWEL goes over the 100-yard mark on this TD 🙌 #FlyEaglesFly

The Eagles' offensive line pushed the Giants around, and simply dominated the game.

On the first drive of the game, Goedert delivered a stiff arm to Giants CB Adoree Jackson during a run after the catch. That set the tone for a game in which the Eagles were the physical aggressors. He also scored after this fantastic one-handed catch on the same drive:

Goedert caught all 5 of his targets for 58 yards and the above score.

Before Goedert made his two big plays on the opening drive, Hurts found Smith for a 40-yard gain on the second play from scrimmage:

Jalen to DeVonta. Good for 33 yards!

Smith finished with 6 catches for 61 yards and a TD.

5) The 'Not So Soft' Award: Jonathan Gannon

There was some fan concern about how the Eagles' defense would fare against a Daniel Jones-led Giants offense that loves to dink and dunk in the short-to-intermediate areas of the field, where Gannon's defense has been victimized in the past.

No worries. Gannon had an aggressive game plan, blitzing Jones often and rattling him in the process. The Eagles' defense pressured Jones all night, and finished with five sacks.

Bradberry was the Giants' best cornerback for two seasons, before they did him dirty by cutting him in a salary cap dump in May, two months after the start of free agency. The Eagles swooped in and signed Bradberry to a steal of a deal, and he made his first All-Pro team this season.

He beat his former team three times this season.

Credit the Giants for winning double-digit games this season and making it to the divisional round of the playoffs, but this was about as ideal a first playoff opponent as the Eagles could have hoped for.

How many Giants players would start for this Eagles team? Four? Maybe five?

To the 1 seed go the spoils.

For those of you who believe in omens, it was five years ago on Saturday that the Eagles beat the Vikings 38-7 in the NFC Championship Game.

9) The 'Reclaim Their Throne' Award 👑: The Eagles

Yes, the Eagles looked sluggish to close the regular season, but if Hurts and Johnson are mostly healthy, as they appear to be, the Eagles are the best team in football once again. If they get starting slot corner Avonte Maddox back soon, they will have all of their starters available both on offense and defense, barring any surprise injuries emerging from this game.

The Eagles will play in the NFC Championship Game next Sunday, January 29, at 3:00 p.m. The Cowboys and 49ers will battle it out for the right to face the Birds in Philadelphia. On Sunday, the Eagles can simply sit back, watch, and wait to see who they'll play. My guess is that there will be a spike in stuffed crust pizza sales in the greater Philadelphia area this weekend.