Eagles thrash the Giants, 38-7, just like the Vikings five years ago 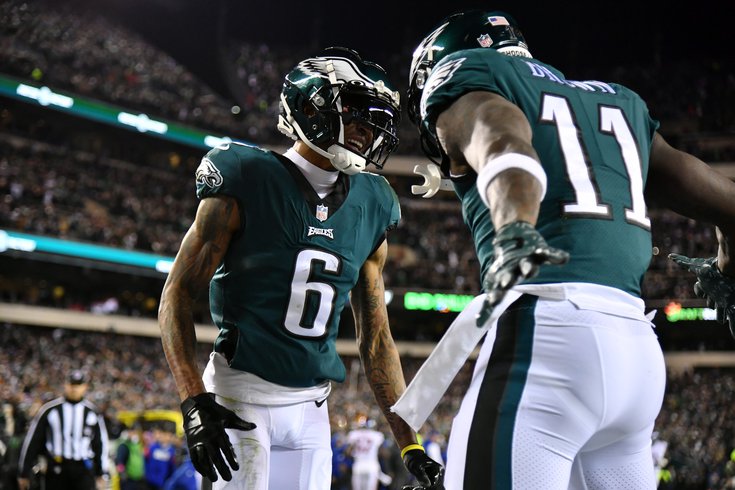 Heroes emerge in the regular season. Legends are born in the playoffs.

Legends and the best kinds of parties, and boy, did Philadelphia have all that going for it Saturday night at the Linc.

From the word go, it was all Eagles.

And the biggest concern wasn't bye-week rust, Jalen Hurts' shoulder, Lane Johnson's adductor, or even Jonathan Gannon's defensive playcalling. It was whether the stadium was going to run out of fireworks from how much the Eagles were scoring in a 38-7 beatdown the likes of which this city hasn't seen since that iconic thrashing of Minnesota in the NFC Championship five years ago to the day. Same score and all.

That game was when everyone knew the 2017 team was truly special, that the train wasn't going to stop, and that the Super Bowl wasn't just some pipedream. That the Eagles were on the verge of pulling off the impossible and could actually do it – and they did actually do it.

Is this the 2022 squad's equivalent? Does history repeat? The jury's still out, and obviously, there will be points raised against it:

• The Giants aren't actually that good.

• The Cowboys or 49ers will present a much greater challenge.

• They took their foot off the gas in the second half.

• They can't keep up with the Chiefs, Bills, or Bengals.

And yeah, those are probably gonna be thrown out there up until the Eagles are holding the trophy (if they get there, of course). The same thing happened on the 2017 run too.

But for now, Saturday night was a new entry into Philly sports legend, and the best kind of party, one we'll be talking about forever – especially if the aftermath of it was as good as five years ago. Have fun with it.

Remember Hurts stepping in and moving the ball with ruthless efficiency, making it all look so easy after last year's postseason disaster against Tampa Bay, and looking back to every bit the MVP candidate he was for the better part of the season (What shoulder sprain?)

"Hopefully that's the biggest respect I can pay to him, comparing his ability to being on the field to a Michael Jordan type. This guy leads. He brings this calmness to the entire team. He plays great football. He's tough as they come...Yeah, to me, nobody has played any better football than him this year."

Remember Dallas Goedert's one-handed catch and how he trucked forward to the end zone with it right after, sending the crowd into a frenzy on the opening score.

Less than 5 minutes into the game and Philly is rocking 😎

Remember DeVonta Smith, in Year 2 and his second go at the playoffs, catching just about anything and everything – a 40-yard bomb off play action, a bubble screen with an A.J. Brown block that saw him dive past three Giants for the score, or a quick catch and run where he stumbled the whole way to the first-down marker.

Remember Miles Sanders, in possibly his last year as an Eagle, taking every yard in front of him. Then in goal line territory, 5'6" Boston Scott proving that he is very much still the Giant Killer, even in the postseason, and that the Eagles' QB sneak had become so automatic and anticipated that Hurts faked it into a big-yardage pitch back to Kenny Gainwell that left the Giants' defense completely fooled.

"Pick your poison, honestly," Sanders said. "Starting with the quarterback, to the tight ends, to the running backs and the O-line, it's just all good work. Everybody plays for each other."

Remember Haason Reddick, after a 16-sack campaign and his first go at the playoffs with his hometown team (in front of the hometown crowd even), either sending Daniel Jones backward or leaving him on the lookout for No. 7 all night. And James Bradberry jumping Darius Slayton's route for the pick, making the Giants' call to release him back in the summer just that much more baffling.

Remember Reed Blankenship taking down Saquon Barkley for a loss and whatever that fourth down offensive snap he was supposed to take was, the broken chains, the lost contact lens, and if you were watching at home, all of Joe Davis' emphatic calls (he's been getting real comfortable around here of late), and the vibes being so immaculate that even Sirianni was showboating for the camera.

There are no promises that this is the start of a Super Bowl run – there's no way to tell for sure, after all – but Saturday night was as good of a start as any, an eerily familiar one even. The Eagles are headed to the NFC Championship. They look every bit the No. 1 seed they were for 3/4 of the regular season and are probably ready to stand toe-to-toe with anyone.

They're hungry, just like that team from five years ago.

"We just want to continue to grow together, hold each other accountable, and believe in one another.

"I think we just came out hungry. That's what it was."