3 reasons why the Eagles beat the Giants, advanced to NFC title game

The Eagles were their old dominant selves when they needed to be Saturday, and need one win to make it to Super Bowl LVII. 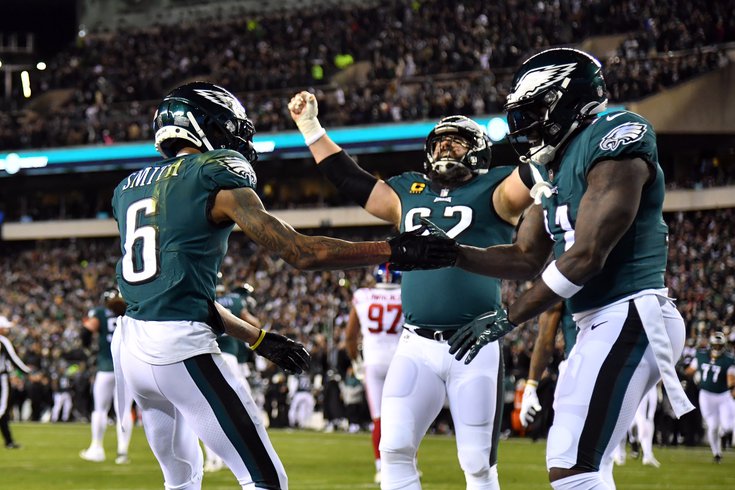 If you're a Philadelphia Eagles fan, Saturday night was one of the funnest days of your life.

No, it wasn't a Super Bowl title, but it's about as good as a fan can feel about a football team without winning one. In a 38-7 mashing of division rivals the Giants, the Birds punched their ticket to the NFC title game, to be held next Sunday Afternoon in South Philly. And more than that, they were redeemed, and reminded of just how good their team is.

But how were they so dominant in their most recent win? Here are the three biggest reasons they dismantled New York and are now just two victories away from a championship:

1. They were the Eagles again

The Eagles sort of faded from the national consciousness toward the end of December. After leaping ahead to a 13-1 start, never not having the best record in the NFC for a single day, the Birds suffered injuries and setbacks while teams like the 49ers, Cowboys and Chiefs got all the column inches.

Even though they were touchdown favorites against the Giants, many thought it would be a close game, and that Philadelphia may have peaked too early.

So much for that.

Everything the Eagles did better than everyone else during the first 3/4 of the regular season, they did on Saturday night.

Hurts looked perfectly fine, going deep to DeVonta Smith early, threading a few needles and avoiding the Giants pass rush with gusto. He also looked very confident to take a hit, fearlessly running the ball nine times — once for a touchdown. The run game was also dominant and moved the ball at will.

The defense looked like the best in the game again too, only surrendering a score in garbage time and still out-gaining the G-men 416 to 227, and out possessing them by more than 10 minutes. The defensive line was dominant, giving Daniel Jones fits and Boston Scott scored yet another touchdown against his favorite team.

After carving up the Vikings in the Wild Card round and prompting many to rank him among the elite quarterbacks remaining in the postseason (and ahead of Hurts), Jones returned to try and get revenge against one of the defenses that made him look the worst during the regular season (a 48-22 drubbing).

No Jalen Hurts?!? He’s really on one. pic.twitter.com/9UNQrNK6Nx

Is Jones the real deal? We'd find out against a much better Philly defense... and we did.

.@EmmanuelAcho: Daniel Jones is officially teetering with that threatening concept of being elite. pic.twitter.com/TOAJn8GYcE

Yes, Jones has some legs, but his offensive line and receiving targets leave a lot to be desired and the Eagles made that very clear as they pummeled him with pressure all game long. Jones had no time in the pocket, and tossed a very costly interception in the first half that the Eagles converted into seven points. He was even hit so hard in the second quarter that he lost a contact lens.

Due in part to his lackluster play and to the defense's ability to wreak havoc, Jones never got in rhythm and very few drives did anything of note.

There has been buzz about Jones earning a rich second contract to stay with the Giants, as he approaches free agency and Eagles fans would pop champaign corks if Duke product lined his bank account with John Mara's money. In Saturday's loss he was 15-for-27 for 135 yards and ran for just 24 yards on six carries (he had just 68 yards passing before the start of the fourth quarter).

Everyone knows the Eagles struggled to clinch the NFC East, the 1-seed in the conference, home field advantage and a first round bye as they stumbled to the finish line with injuries abound (they were 1-for-3 in clinch scenarios). But the win they had over the Giants to end the regular season might be the biggest reason they were able to win so convincingly on Saturday night.

Lane Johnson tore his groin, had an extra week to rest — and looked like a healthy Lane Johnson out there. Hurts had another week to recover not only from his shoulder injury, but from being forced into duty at less than 100% in Week 18. Additionally, countless other Eagles players were able to get some relief from the bumps, bruises and minor ailments every NFL player has.

Nick Sirianni was able to focus and take his time in preparing to win his first playoff game as a head coach and take advantage of a shorter week for the Giants, who had to beat the Vikings to get to this game.

But perhaps most importantly, having this game at home — as well as next week's NFC Championship Game — gave the Eagles a definitive edge. The crowd was out of its mind by the time the PA announcer went player by player through the starting defense (a ballsy move, waiting to announce the bigger stars on offense for next week). Perhaps, historically, there isn't a full correlation between the 1-seed and getting to the Super Bowl, but in the case of the Eagles, it could be the recharge that sends them to Phoenix.