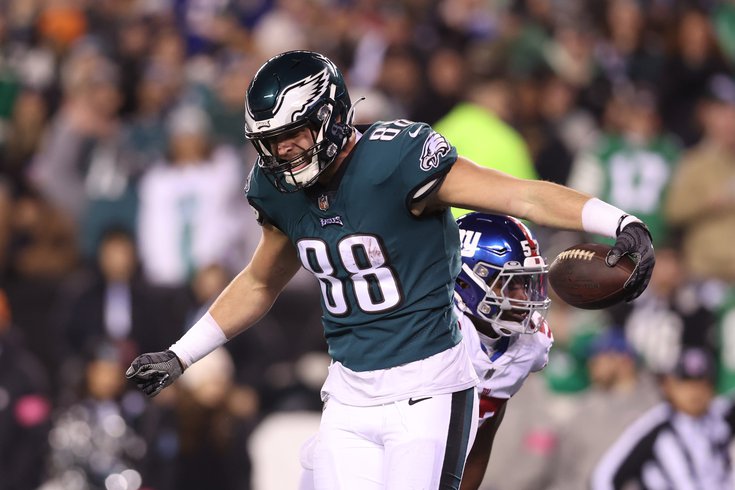 The Eagles punched their ticket to the NFC Championship game with a dominant 38-7 win over the Giants on Saturday. Just one more home win stands between Philadelphia and a Super Bowl berth.

Here's what I saw. There's something about that score that feels familiar...

• A bye and homefield advantage in the playoffs only ultimately mean as much as you can prove they're worth. There were some lingering doubts about how the Eagles would look in round one of the playoffs, primarily driven by a few key injury concerns, a quiet end to the regular season, and a good Giants win on the road in Minnesota. It was up to the Eagles to give the public a reassuring performance and move on to the NFC Championship game.

They did all of that and then some. You would be hard-pressed to find an area of the game where the Eagles were anything short of dominant. Jalen Hurts looked much closer to his MVP-level self, tossing deep balls and using his legs to damage New York on the ground. Their pass rush was borderline unstoppable, with Haason Reddick building off of a great regular season in a multi-sack effort to open the playoffs. Miles Sanders, Boston Scott, and Kenneth Gainwell crushed on the ground. James Bradberry Jr. got revenge on his old teammates. As Jason Kelce once said, in a much different context, it was the whole damn team.

It's the sort of all-encompassing beatdown that makes you applaud the coaching staff, because they clearly pushed all the right buttons and did the damn thing with prep work leading into this game. The Eagles broke on balls early all night, already knowing what Daniel Jones wanted to do and where he wanted to go with the football. They played with a physical edge we hadn't seen from the team in a while, and really, this is the most physically dominant they've looked at any point this season, with their finesse players even handing out punishment on occasion.

If this is how they look with stuffed crust pizza available, somebody get Nick Sirianni a sponsorship deal with Pizza Hut before the weekend is over.

• This time last season, there were a whole lot of doubts about Hurts as a franchise QB. If there are any doubters left, they certainly can't live within Philadelphia city limits, because he has now followed up an electric regular season with a dominant playoff outing. One step at a time, one game at a time, but he came out of the bye week ready to destroy New York, and his offense put this game away long before the halftime whistle was blown.

Even on plays that didn't come off for the Eagles this year, you often felt it was the product of someone else's error rather than Hurts'. Though his legs have been a gigantic asset for the Eagles this year, Hurts has found an excellent middle ground this season, running it himself when necessary but more often using those legs to buy a bit of time and fire a throw downfield. He threw a dart to DeVonta Smith early in the third quarter, under duress as he rolled to his right, and it was only a Smith drop that caused the play to unravel.

It felt like the Eagles had just about the perfect game plan to get the most out of Hurts without exposing him to much injury risk, his shoulder still not at 100 percent. They rode their running backs once this game got out of hand, allowing the clock to be their friend in the final 30 minutes. But when they needed him to come out of the tunnel and set the tone, Hurts gave them a little bit of everything, stringing together deep shots and out routes and screen plays while picking up just enough yardage on the ground to make the Giants hesitate. Not a dominant statistical night, but a great outing all the same.

• Jonathan Gannon has irritated his share of people over the last two years, including former Eagles greats, with his tendency to rely on soft coverage irritating people who grew accustomed to Buddy Ryan and Jim Johnson-style defenses. If anything, this game showcased the best of both worlds, with the Eagles earning a couple of "coverage sacks" by hanging back against Giants receivers and augmenting their pass rush with situational blitzing. They had their cake and ate it too, rattling Daniel Jones with constant pressure in his face.

Reddick has been even better than you could have expected in the first year of a big contract, with their marquee signing setting a bar that everyone else in the trenches has done their best to meet. There weren't many highlight moments for Philadelphia in the second half, but it wasn't a shock to see Josh Sweat come up with one of the few, bulldozing Jones from behind and knocking the ball loose on a beautiful sack-fumble combo.

They're going to face a more dangerous team next week no matter what, but the Eagles look ready for whoever is coming their way. It's not super difficult to put the screws to a QB when you have a pass rush like this one.

• The Eagles coasted to a day with over 200 yards gained on the ground and did so without needing Hurts to add much to that total. The big boys in the trenches dominated, and the men running behind them were thrilled to take advantage.

Full praise due to the combination of Sanders and Scott for getting this thing started. Working behind excellent blocking up front, they offered power, speed, and agility between the tackles, allowing the Eagles to coast to a victory after the fireworks show ended in the second half.

I suppose we've come to expect Scott's dominance in games against the Giants, but a tip of the cap is due to Sanders specifically because he did a lot of the tough work between the tackles that people doubted he could do coming into the season. Philadelphia's lack of a big, bruising back was a talking point before the season began, and while Sanders remains more of a home-run hitter than a LeGarrette Blount sledgehammer in the middle of the line, he earned some tough yards for the Birds in this game, averaging over five yards per carry thanks to his purposeful brand of running.

Hell, Gainwell had himself the best day of all when it was all said and done. His big gainer on a fake QB sneak in the first half was the highlight of a productive day for No. 14, right up until he took a carry in the final two minutes of the game and scampered into the end zone, sending the Giants into the offseason with one last "F you" courtesy of the run game.

.@KENNETHGAINWEL goes over the 100-yard mark on this TD 🙌 #FlyEaglesFly

Midway through the fourth quarter, the diminutive Gainwell dragged several Giants defenders toward the first-down marker, offering a snapshot of the game in one simple run. Philadelphia imposed their will on the Giants, right down through the smallest guys on the roster, not letting up until the job was done.

• Philadelphia's dominance on the ground allowed them to grasp something the Chargers did not a week prior — the clock is your friend when you have a big lead. The Eagles didn't totally take their foot off of the gas after halftime, with Hurts taking a couple of downfield shots in quarters three and four, but their focus was undoubtedly on bleeding the clock and leaving the Giants with little time on offense.

Their fourth-quarter drive, Philadelphia's only scoring possession of the second half, was a masterclass in slowing the tempo. By the time New York got the ball back, they were down 24 points with a little over five minutes to make up the difference. Wasn't going to happen.

• They didn't run it up in the second half? I don't know, man, complaining about this game just feels like you're acting spoiled. All year, there was a little too much chatter about playing a complete, 60-minute game rather than the fact that the Eagles were winning every which way they could. They're one game away from the Super Bowl, and the road to it runs through Philly in the NFC. Treasure these moments.

• I understand you don't want to completely abandon the run when you're in a big hole after halftime, but the Giants never seemed to grasp that they were down four scores with not a ton of time to make up ground. The Eagles didn't match their first-half performance or even come close in the final 30 minutes, but they didn't have to, because New York effectively killed the clock they desperately needed.

There's probably a passage from Sun Tzu's The Art of War on this, but letting your opponent beat themselves is a perfectly viable strategy.

• Daniel Jones taking a sack for a several-yard loss rather than simply throwing the ball away was, well, certainly a decision. Eagles fans should probably be crossing their fingers that New York locks this guy into a lucrative long-term deal.

That decision from Jones was only topped by his head coach two plays later, with the Giants opting to punt on fourth-and-six in a game where they were down by three touchdowns. I'm genuinely unsure if anyone knew what the score was on New York's sideline, and if they did, that almost makes it more embarrassing. You're not going to see a more obvious concession of a playoff game than that, and if there was anybody on that roster who still believed in the comeback bid at that point, they couldn't have been thrilled with their coach's cowardice.

• Michael Strahan picking the Giants to win the game outright and then not offering a single second of analysis at halftime was pretty hilarious.

• Can't believe the theatrics on the fourth-and-eight play where Philadelphia took a delay of game after feinting as if they had dialed up a fake punt. You were at the 38-yard line of the Giants, either kick a long field goal or just go for it and cut the BS.

(There were some reports that Jake Elliott struggled kicking in that direction during warmups, but even with that being the case, I would have rather seen the Eagles go for it.)

• A.J. Brown looked to be moving a little slow in the fourth quarter, so here's hoping he's alright.