What will Jalen Hurts' stats look like against the Giants?

Setting five over/under numbers for the Eagles' playoff game against the Giants, including Jalen Hurts rushing yards and TDs 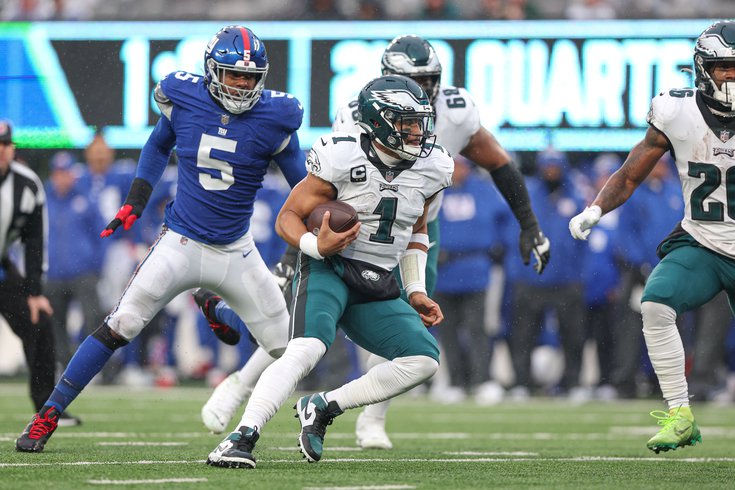 Eagles QB Jalen Hurts takes off running against the Giants.

Eagles quarterback Jalen Hurts made his playoff debut last January and it went about as poorly as possible in the team's loss to the Buccaneers. As a Birds fan, you can live with that knowing Hurts took his lumps, got playoff experience under his belt and now realizes how the game changes when things really matter.

I think back to Nick Foles' playoff debut in 2013 against the Saints, a loss at the Lincoln Financial Field. Foles' numbers were good (two TDs, 105.0 QB rating) and he infamously "left the field with a lead," but he left plays out there and wasn't spectacular. The Birds didn't win, but that experience on the NFL's big-time stage no doubt proved valuable when the time came for Foles to save the Eagles' season during their 2017 Super Bowl run.

Hurts is a much different player than the one he was against Tampa Bay in the 2021 Wild Card round. His accuracy and quick decision-making are markedly improved. The fact that he'll be throwing to A.J. Brown this time around helps matters too. I'm expecting a big jump in Hurts' second postseason go-around and it's not hyperbolic to believe he could go full Foles mode and bring the Lombardi Trophy to Philadelphia.

Ahead of the Eagles' first playoff matchup of the season Saturday night, I want to run down five/over unders for the game with an emphasis on what Hurts' statistics could look like against the New York Giants.

Note: Unless noted, over/under figures are my own creation and which way I would lean in a hypothetical bet.

Hurts' running ability defined his early pro career, but as he showcased across the 2022 season, the dude can air it out, having the Eagles operate as a versatile attack all year long. In Hurts' return to the lineup in the regular season finale following a Week 15 shoulder sprain, Hurts didn't run much, whether that be on designed carries or scrambles. I don't anticipate that being the case against New York, allowing Hurts full control to take over the game both as a passer and runner.

Can you imagine the reaction at the Linc when Hurts tucks it and runs for 35 yards on a 3rd and seven on the Birds' first offensive drive?

As much as Eagles fans might not want to admit it, the Giants have a pretty good runner at QB in their own right in Daniel Jones. No, he does not possess Hurts' game-breaking ability, but he's a skilled scrambler who picked up 708 yards on the ground this season. If the Eagles defense can force New York into some third and longs given their poor receiver group, Jones is a threat to make moves with his legs and pick up first downs.

Though I am predicting a double-digit Eagles win, Jones will have ample opportunities to pick up rushing yards, especially if the Giants are trailing late and need to do anything to get back into the game in obvious passing situations.

Again, I'm banking on a big Hurts night. He could barrel through the trenches for a couple of QB sneak TDs or air it out the likes of Brown, DeVonta Smith and Dallas Goedert.

That translates to big touchdown numbers for Hurts, right?

Sure, it could, but I'll go under and say he just has two: a rushing TD in the red zone and a passing TD to Smith. The Birds just have skilled guys in the run game (more on that in a sec) who could find their own way into the end zone without Hurts' direct help.

When the two teams met in Week 14 at the Meadowlands, the Eagles' pass rush destroyed Daniel Jones and Tyrod Taylor, racking up seven sacks on their way to an NFL-best 72 sacks, the second-highest team total in league history.

With Brandon Graham back in the postseason for the first time in three years and Haason Reddick making his playoff debut, this the front seven is going to be juiced up. That's even before getting it to star-caliber guys like Javon Hargrave and Josh Sweat or franchise mainstay Fletcher Cox.

Defensive coordinator Jonathan Gannon may not be the most beloved figure in Philly sports, but his defense was cooking this year and he's on his way to a head coaching job elsewhere this upcoming offseason. He's going to have this pass rush all up in Jones' face all night.

I say the Eagles meet their Week 14 total with seven sacks, including two from Reddick alone.

Lock of the century.