Eagles could play in Germany during 2023 season

Given the Eagles' 2023 opponents, it's possible they could play the Patriots or Chiefs in Germany next season. 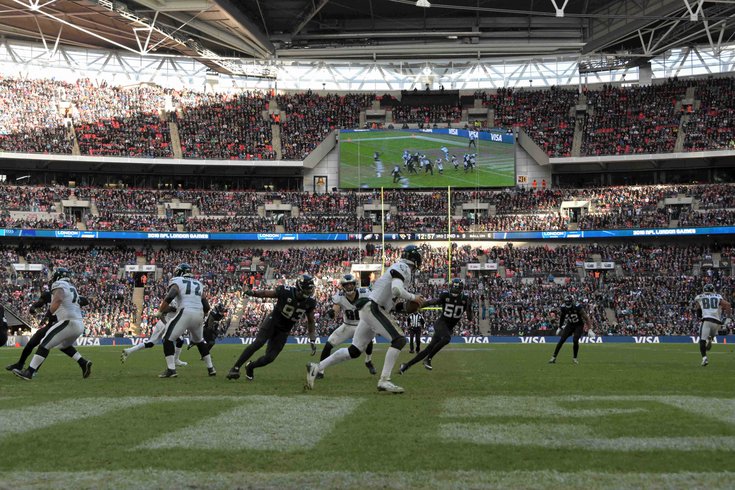 The Eagles playing against the Jaguars in London at Wembley Stadium in 2018.

While the Eagles are obviously still fighting in the NFL playoffs, their opponents for the 2023 season are known. Given that, it's possible that the Birds could play in Germany this fall as part of the NFL's ongoing international games series.

Both the Patriots and the Chiefs will be host teams during the league's two Germany games in 2023:

Breaking: NFL officially announces that the Patriots will host a home game in Germany in 2023.

Chiefs will also host a Germany game next year, while the Bills, Titans and Jaguars will play home games in London

The Eagles are scheduled to play both New England and Kansas City on the road next season, leaving open the possibility of the team heading overseas for a game.

I have trouble seeing the Eagles-Chiefs game being scheduled for Germany. It's a huge, rarely seen interconference matchup with tons of juicy storylines given Andy Reid's connection to the franchise. That's before even considering that it could be a possible Super Bowl rematch. That feels destined for a Sunday night or Monday night game.

In this hypothetical scenario, it would be the Eagles' second regular season international game following their 2018 win over the Jaguars in London.