Handing out 10 awards from the Eagles-Saints playoff game 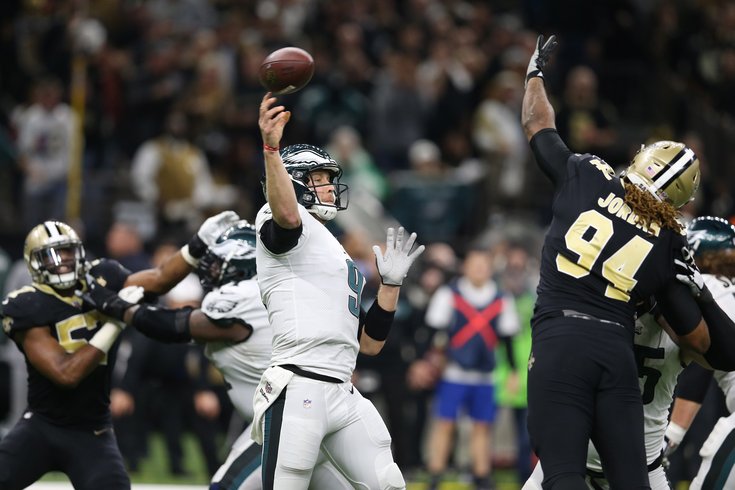 The 2018-2019 Philadelphia Eagles produced one of the weirdest, unpredictable, roller-coaster seasons that I can remember, and it ended Sunday night in New Orleans, at the hands of the Saints. As always, one last time this season, win or lose, we hand out 10 awards.

The lasting image of the Eagles' loss to the Saints will be the ball slipping through the hands of Alshon Jeffery, and landing softly in the arms of Saints cornerback Marshon Lattimore. That play essentially ended the Eagles' season.

After the game, Jeffery took accountability for the drop:

“I’ll take that loss. It’s on me.” Alshon Jeffery says he let team and city down, but vows Eagles will be back next year. pic.twitter.com/TKRxFCJQOp

Last year, Jeffery played the entire season with a torn rotator cuff, and was a major reason the Eagles won the Super Bowl. In this game, Jeffery was playing with broken ribs, according to Lane Johnson:

Could tell how well liked Alshon Jeffery is. Teammates all went out of their way in locker room to make it clear that his drop wasn’t the reason for the loss.

Jeffery is a good football player, and a guy who battled to through pain two straight seasons for his teammates. I trust that the smarter faction of the Eagles' fan base won't make him a villain.

2) The 'Microcosm' Award: The Eagles' injuries

The Eagles had an absurd number of players land on IR this season, and many more who missed big chucks of the season, but returned. You all know the names by now. If you were to look around the league at the teams most devastated by injuries this season, you'd be hard-pressed to find many who suffered as many significant losses as the Eagles. And yet, they persevered, made the playoffs, won a road playoff game against the best defense in the league, and had a chance to beat a Saints team in the final minute in perhaps the most difficult stadium to visit in the NFL.

On Sunday, the carnage the Eagles suffered was a microcosm of the season. Brandon Brooks, Jason Peters, Alshon Jeffery, Fletcher Cox, Brandon Graham, Michael Bennett, Chris Long, and Rasul Douglas all were injured during this game, some more seriously than others. Brooks' injury is the most serious:

Wanted to take a minute to thank everyone for the well wishes. Yeah it sucks I tore my Achilles but you know what I look forward to attacking rehab like it’s a game. I look forward to this long journey. God got me and this did nothing but light a fire I needed

In this game, the Eagles came out on fire, prior to all the injuries. They did not look the same after losing so many big-name players.

Facing a 3rd and 1 from their own 30, the Saints tried to run the ball with Mark Ingram, but went nowhere. On play, the Saints were flagged for a hold, which Doug Pederson made the obvious decision to decline, setting up a 4th and 1 instead of a 3rd and 11.

Down 14 with no momentum whatsoever and only a yard to go, a fake punt was certainly a possibility. The Eagles were well aware of this, and left their starting defense on the field. In that situation, the Saints' punt team has linebackers in the game, trying to block the Eagles' starting defensive line. That should be advantage Eagles all day, but somehow, even with the Eagles prepared for the fake, Taysom Hill ran for a first down anyway.

The Saints would run nine more plays on the drive, scoring their first points of the game on a TD.

That was the play of the game. If the Eagles' defensive starters can make that play against linebackers and fullbacks, they would have had the ball in scoring position, with a chance to go up 21. At a minimum, it was a 7-point swing. At a maximum, 14.

Also, for anyone who thinks that Pederson should have accepted the penalty, are you high? Did you not see how many third-and-longs this team gave up all season long? Can you imagine how badly Doug would have (rightfully) gotten lambasted had he accepted the penalty and the Saints converted on third down?

4) The 'Why Run the Play?' Award: Doug Pederson

With the clock ticking down in the fourth quarter and the Eagles trying to drive for the win, the Eagles opted to run a play prior to the two-minute warning rather than taking a little extra time off the clock.

At the time, the Eagles were at the Saints' 27-yard line, a spot on the field where having two minutes (and one timeout) is an eternity. I think there was certainly some well-founded logic that balancing the need for a score with trying not to leave too much time left for Drew Brees and the Saints to score going the other way might dictate that you just let the clock wind down to the two-minute warning.

Instead, they ran the play, the ball slipped through Jeffery's hands, and yada yada yada, the Eagles' season was over.

The immediate reaction by many was that the hurried play led to the interception. It did not. Jeffery was open, and the ball hit him in the hands. Sometime players just make bad plays.

There was just nothing there, and this was a rare game in which even the most staunch "RUN THE BALL!" types wouldn't have had a problem with completely abandoning the run.

Losing Peters and Brooks contributed to the lack of a run game, but the Eagles would be wise to go shopping for a good running back this offseason.

Foles will forever be a legend in Philadelphia, for his heroic postseason run last year, culminating in the city's first Super Bowl. This was very likely his last game as an Eagle.

Foles came out on fire in this game, leading what seemed like a pair of flawless touchdown drives to start the game, but he went cold thereafter, missing more than a handful of throws that could have been big plays. He was not the Super Foles we grew accustomed to seeing in the Eagles' biggest games.

Carson Wentz is definitively the future of the quarterback position in Philadelphia, but Foles will forever be one of the most beloved sports figures in Philadelphia history.

Each of the above players have their own unique situations that will play out this offseason, but some of those guys won't be with the team in 2019. Obviously, we'll be covering all of them in the coming weeks, but this offseason should be a very interesting one in terms of who stays and who goes.

8) The 'Bright' Award: The Eagles' future

Even with a number of potential departures listed above, when you consider that the Eagles made it to the divisional round with all the injuries they sustained, you have to feel good about their future, provided their injury luck (or lack thereof) isn't so awful next season.

This was a good football team even with the injuries. Without them, how good can they be? Maybe we'll find out in 2019?

9) The 'Regular Season Matters' Award: The Eagles' many frustrating losses this season

The Eagles pissed away a number of games this season, most notably against the Panthers and Titans, and ultimately, those losses cost them the division. Even if they would have "only" earned the 4 seed, they would have had a home game sprinkled in, instead of having to go on the road three straight weeks, which is extremely difficult.

Playoff history in the NFL shows that it is a hell of a lot easier to make it to the Super Bowl when you have home field advantage throughout the playoffs, or at least a first round bye. That is especially true of the last five years.

During the above five-year span, the average number of wins necessary to earn one of the 10 home field advantages throughout the playoffs was exactly 13. In order to earn the No. 2 seed, three teams had 13 wins, six teams had 12 wins, and just one was able to get the No. 2 seed with 11 wins.

In other words, the margin for error for teams to put themselves in a position to earn at least a first round bye, or even better, home field advantage, is small.

And hey, the four remaining teams left in this year's playoffs are all No. 1 or No. 2 seeds.

Playing every game like it is every bit as important as the next needs to be a lesson learned for this team going forward.

The Eagles have become an older team, but they'll (likely) have 10 draft picks to work with this offseason, a year after they only had five. This offseason will be a critical one for the team's long term sustainability at the top.