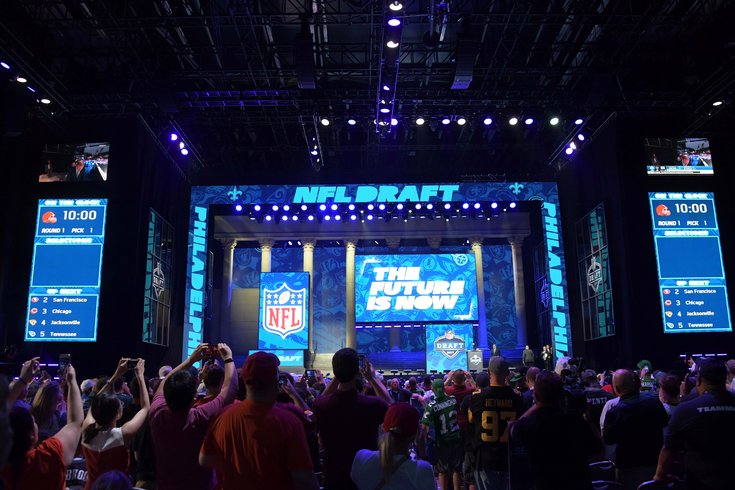 The setup during last year's NFL Draft at the Philadelphia Museum of Art.

The Philadelphia Eagles currently have seven picks in the 2019 NFL Draft, as they have made seven trades that affect their picks, and were awarded two compensatory picks.

First, a look at each of their trades, in chronological order:

• They traded Allen Barbre to the Denver Broncos for a conditional seventh round pick.

• They traded Jon Dorenbos to the New Orleans Saints for a seventh round pick. That pick then reverted back to the Saints after it was discovered that Dorenbos needed heart surgery.

• They traded down from the first round of the 2018 NFL Draft with the Baltimore Ravens, landing a second round pick in 2019 in the process.

• They traded up in the seventh round of the 2018 NFL Draft for Jordan Mailata. The cost was the Eagles' 2019 seventh round pick.

• They traded a seventh-round pick (the one acquired from Denver for Barbre) to the Bears for Deiondre Hall.

• At the trade deadline during the 2018 season, they traded their third-round pick for WR Golden Tate.

• The Eagles traded a 2019 sixth-round pick (208 overall) to the Buccaneers for DeSean Jackson and their seventh-round pick in 2020.

Here is a look at the Eagles' projected 2019 draft picks, which we'll update anytime it changes: