'Weekend Update' joked about the president's Yovanovitch tweet: 'Trump started off in Atlantic City. How did that go?' 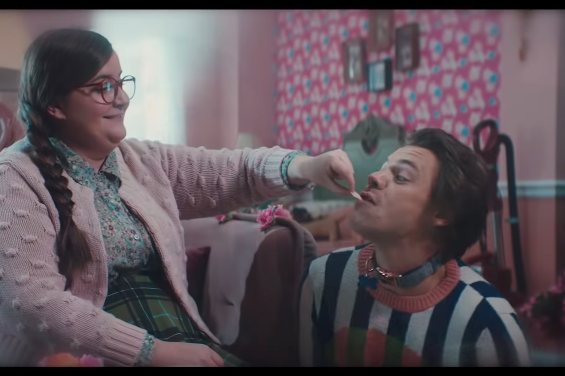 After this week's impeachment hearings, Harry Styles brought the right amount of silliness and a solid performance to the latest episode of "Saturday Night Live."

Styles (who's in a man band now) has appeared in several SNL sketches over the years with hosts Jimmy Fallon, Sofia Vergara and Paul Rudd. The British singer was many things this episode, from a drug dealer body guard in "That's the Game" to a social media manager at Sara Lee who isn't all that great at representing the brand.

MORE: Brick Bar is coming to a secret location in Philly for two days

But he's also ... your dream dog boyfriend? Yeah, sure, why not? The singer stars alongside Aidy Bryant as Joan in a musical number about the strong bond between a single person and their dog (but, like, not in a weird way.) Styles plays the human version of a 12-pound chihuahua who loves the way she feeds him ham. It's adorable, and yet, as creepy as it sounds.

In "Funeral DJs," the singer performs as one part of duo, "DJ Casket Twins," with Chris Redd who were both, apparently, very close with an 89-year-old nana. The duo helps the unsuspecting family deal with their loss with remixes of everyone's favorite sad songs, like "Everybody Hurts" by REM, with dance numbers such as "Everybody Dance Now" by C + C Dance Factory.

Impeachment moments were certainly explored this episode, including a cold open that reimagined the hearings as a soap opera — even with a telenova romance between Bill Taylor (played by John Hamm ... because naturally) and Alexandrio Ocasio-Cortez (Melissa Villasenor).

At the start of "Weekend Update," Colin Jost jokes about President Donald Trump's tweet regarding former U.S. Ambassador Marie Yovanovitch. The president tweeted, "Everywhere Marie Yovanovitch went turned bad. She started off in Somalia, how did that go?" Jost replies, "Well, as long as we're talking about track records: Trump started off in Atlantic City. How did that go?"