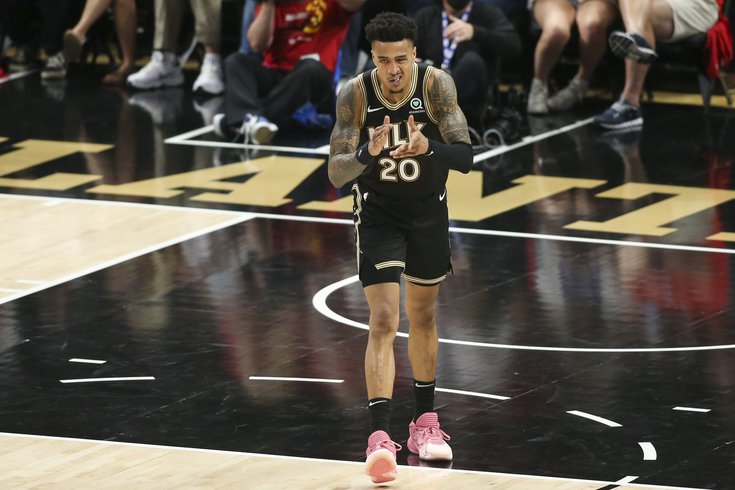 Atlanta Hawks forward John Collins trolled Sixers center Joel Embiid after Philadelphia's elimination from the NBA Playoffs on Sunday night. Collins wore a T-shirt with an image of his dunk on Embiid in Game 6 in Atlanta.

Sixers fans are reeling after Philadelphia was eliminated from the NBA playoffs at home Sunday night by the Atlanta Hawks, one of the most "meh" franchises in professional sports.

Some may choose to steer clear of NBA news and discussion altogether this week, but opting for numbness isn't ultimately much better, or more bearable, than feeling the salt in the wound.

Following the Sixers' 103-96 loss in Game 7, most of the attention in Philadelphia was understandably on the press conferences of Doc Rivers, Ben Simmons and Joel Embiid. With big changes potentially on the table this offseason — yet again — the reactions of Philadelphia's leaders carry a lot more importance than taking in Trae Young's Waluigi-like grin.

There's a long list of villains on the Atlanta Hawks roster. Philly will always have to remember the spectacular Game 7 performance delivered by Kevin Huerter, who's exactly the kind of Joe Jurevicius menace this city would let kill us when it matters most. That's arguably the most painful reality Sixers fans will have to stomach looking back on this season.

But on the court, was there any Hawks player more annoying and confrontational than John Collins? He seemed to spar with everyone on the Sixers at some point in the series, none more than Joel Embiid.

In Game 6, Collins posterized Embiid with one of the most vicious-looking dunks in recent memory. He clutched his elbow around Embiid's neck as he came down and somehow managed to be the one to draw the foul on the play. The moment was softened only by the fact that the Sixers went on to win that game, but Collins got the last laugh.

After Game 7, Collins appeared at his postgame press conference wearing a graphic T-shirt of the dunk on Embiid. It's a level of pettiness that even Embiid, at the peak of his troll powers, probably wouldn't have stooped to in victory.

John Collins gets last laugh on Joel Embiid - Game 7 win and then wears a shirt of him dunking on Embiid in his postgame presser pic.twitter.com/uwr9cWqeEu

Embiid was blunt during his postgame press conference about his frustration with the NBA fining him $35,000 for another run-in with Collins under the basket.

"I get fined the last game for having my arms up while I'm getting pushed in the freaking back?" Embiid asked. "And I get fined just because, I guess — I don't know why. There's a lot of stuff that went wrong. As a team, we still have to be better. We had a good chance to win. We just made a lot of mistakes."

Collins' rowdiness during the Sixers-Hawks series led to misdirected Twitter backlash against another John Collins, a British rower who competed in the 2016 Olympics.

I hope I’m not getting fined. I’m not even a basketball player.

This is what another rough ending to a Sixers season looks like. There's not much consolation to be found, especially when this team had such high expectations and the Hawks were not expected to pose a serious threat over a seven-game series with home court advantage in Philly. But here we are.

It will be somewhat relieving if the Bucks can stomp the Hawks in the Eastern Conference Finals and bring them back to Earth.