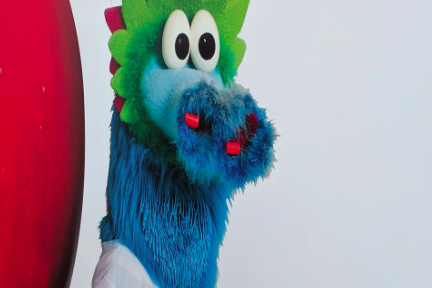 Slyly, the mascot for the Hiroshima Carp, was designed by the same firm behind the Phillie Phanatic.

When the Philadelphia Phillies gave Bonnie Erickson the gig to design a mascot for the team in the late 1970s, little did the creator of the Muppets' Miss Piggy likely foresee the profound impact the Phanatic would have on the city's baseball tradition.

In 1978, the year the Phanatic debuted, Erickson and her husband collected $2 million in merch sales because, at the time, Phillies executive Bill Giles didn't see fit to plunk to down another $1,300 for the rights to the mascot on top of the $3,900 price tag for the costume.

Thirty-eight years later, through the best and worst of times, the Phillie Phanatic remains a surefire recruitment tool for young fans who otherwise might not catch on during the team's lean seasons.

Erickson, as it turns out, did the same favor for the Hiroshima Carp of Japan's Central League. She and colleagues at her company, New York-based Harrison/Erickson, helped design a mascot named Slyly who's basically the same thing as the Phillie Phanatic, except he's blue. A Philadelphia couple traveling in Hiroshima spotted Slyly and posted on Reddit Wednesday to say they found the Phanatic's mother. Some commenters then pitched in to fill in the back story.

The man in the Slyly suit is actually a Philadelphia native who was previously a Phillies Phanstormer loading up the hotdog gun and performing other mid-inning duties. As you can see, he imported a few of the Phanatic's antics for his routine at Japan's more low-key baseball games.