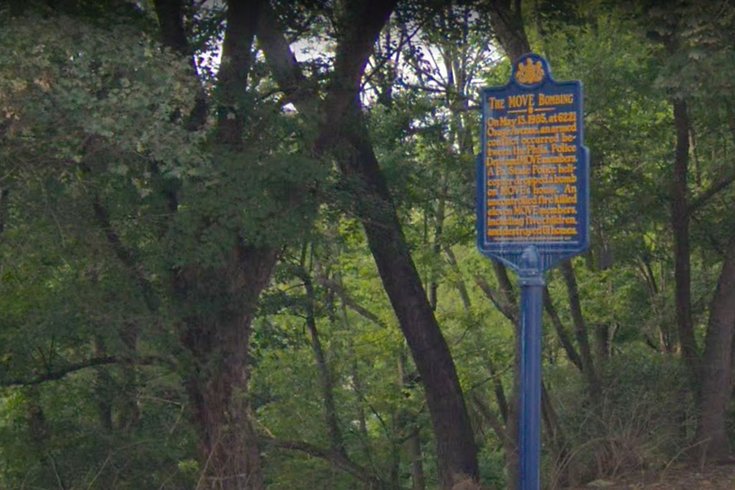 The historical marker for the MOVE bombing sits along the edge of Cobbs Creek Park, opposite Osage Avenue, in West Philadelphia.

Students from Southwest Philadelphia's private Jubilee School will be on hand Saturday for a hard-won ceremony to place at historical marker at the site of the infamous 1985 MOVE bombing, an unprecedented event that left 11 people dead and destroyed 61 rowhomes.

The marker gained approval earlier this year from the Pennsylvania Historical and Museum Commission, which reviewed the nomination from students at the K-5 elementary school, according to The Philadelphia Tribune.

On May 13, 1985, amid a 24-hour siege of the black liberation group's headquarters at 6221 Osage Ave., Philadelphia police took the extreme measure of dropping C4 explosives onto the property from a Pennsylvania State Police helicopter. The incident stemmed from an armed protest of the incarceration of nine MOVE members, all of whom were sentenced in the 1978 murder of Philadelphia police officer James Ramp.

Five children were among the 11 people killed and the ensuing fire that engulfed the block is still considered the worst in Philadelphia's history.

In their nomination of the site, Jubilee students argued the event warrants a historical marker because it signifies "one of the most extreme cases of police violence and government abuses of power."

Former Mayor Wilson Goode's MOVE Commission eventually deemed the incident an "unconscionable" act and a civil lawsuit resulted in Philadelphia paying $1.5 million to a survivor and relatives of two MOVE members who died in the fire.

In April, the Philadelphia Redevelopment Authority selected AJR Endeavors to lead a renovation project along the 6200 blocks of Osage Avenue and Pine Street. The project will rehabilitate 36 vacant properties in the Cobbs Creek neighborhood, drawing on community input and participation from local businesses.

Saturday's event will be open to the community at the intersection of Osage Avenue and Cobbs Creek Park. The ceremony will include poetry, music and speakers discussing the importance of the historical marker. More information on the event, scheduled for 3-4:30 p.m., can be found here.