How do the new Eagles look: Offense edition 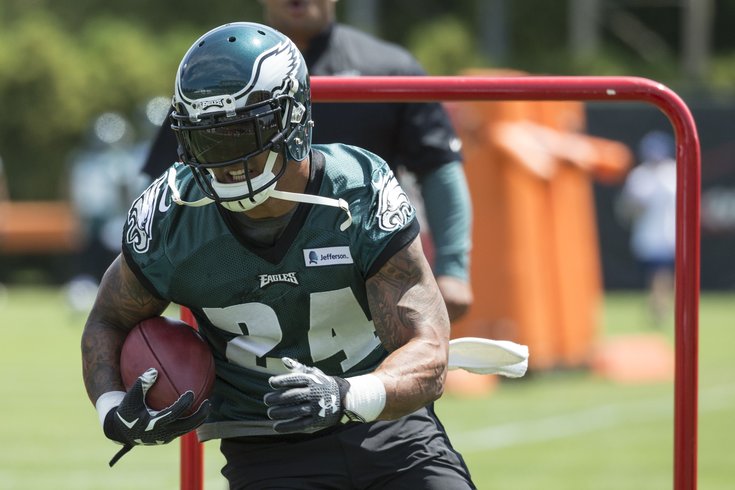 Ryan Mathews, is big, fast, and he has a cool visor.

The Eagles now have a few sets of OTAs, a minicamp and the first five days of training camp in the books. After having watched well over double-digits practices at this point, let's evaluate how some of the new players look so far, starting with the offense.

• Sam Bradford: During OTAs, I thought Bradford's movements (in terms of his footwork) were very deliberate and cautious. He did not look like a guy who was ready back in June. Since then, he has come a long way. He looks far more comfortable moving around, and has even eschewed his bulky knee brace for a more spandexy version. Whether he can take a hit from a 300 pound defensive lineman or not yet is another story. We'll see soon enough.

As for his game, the one thing that stands out is his accuracy, or perhaps better stated, his ball placement. Bradford does a terrific job putting the ball where receivers can catch it on the dead sprint, maintain their separation, and get yards after the catch. That is so important. Additionally, many receivers remarked about how Bradford stands tall in the pocket, and they can easily see him deliver passes over the offensive and defensive linemen. That came as a surprise observation to me from the guys who were already on the team a year ago, seeing as Nick Foles is 6'6.

• Tim Tebow: "Timmy," as Chip Kelly likes to call him, has come a long way since OTAs. I still think his delivery/windup is still very slow in comparison to the other quarterbacks. He'll also bounce some passes, and his accuracy is erratic. However, he has shown flashes of being a legitimate NFL quarterback. There was a series on Thursday in which he took three consecutive shots down the field, all of which were completions, all of which were on the money.

Obviously, Tebow brings the running aspect to his game that the other quarterbacks don't have, and Brandon Graham has noted that Tebow is the first guy in the building watching film. If you think Tebow is just a side show, think again. He has exceeded what I expected to see of him so far in camp, and I'll bet the coaching staff loves his work ethic.

• DeMarco Murray: Murray hasn't done much to impress yet, frankly. During training camp, he missed one practice because he wasn't properly hydrated, and missed another due to an illness. When he's been on the field he hasn't stood out. In the past, LeSean McCoy often looked like the best player on the field during camp, however, McCoy's jukey, "make you miss" style of running is tailor made for these kinds of practices. Murray is more of a north-south banger, who finds holes and breaks tackles. There is no tackling at Eagles camp, so we don't get to see the best aspect of his game. Still, it would have been good to see more from him so far.

• Ryan Mathews: The first thing that jumps out about Ryan Mathews is how big and cut he is. I mean... He looks like a guy you would create in Madden.

Ryan Mathews looks like a player you would create in Madden. pic.twitter.com/4mjFr8DK3G

The coaching staff has raved about Mathews' speed and hard running style. While you can't see him running through tacklers (as noted above), his burst is apparent. If the Eagles are successful running the ball this season with that fast-paced offense, tired defenses in the fourth quarter are going to have their hands full dealing with the one-two punch of Murray and Mathews. The question is whether or not Mathews can stay healthy.

• Nelson Agholor: Agholor is the real deal, in my opinion. He has made a number of impressive catches throughout OTAs, minicamp, and training camp. His body control has stood out so far, and his speed is obvious. This is a polished rookie who is going to contribute from day one.

• Miles Austin: I haven't seen much of anything out of Miles Austin so far. His biggest highlight (or lowlight, rather) was a drop in a 4th and goal situation during a red zone drill that would have been a touchdown. However, while Austin hasn't stood out on the field, the younger receivers have largely gone out of their way to note how he has been a positive influence on the mental side of the game for them.

• Seyi Ajirotutu: In OTAs and minicamp, Ajirotutu made a number of catches, and was somewhat of a surprise stand out. However, he has cooled off during training camp. Ajirotutu was brought in to be a special teams stud, so we'll get a better look at his worth during the preseason games.

There really isn't much to see here yet. There has only been a small handful of practices in which the Eagles were in pads, and even then, there isn't a lot to evaluate. We'll get a better look at new guys like John Moffitt in the preseason games.