How the man behind 'Haircuts 4 Homeless' lost his barbershop 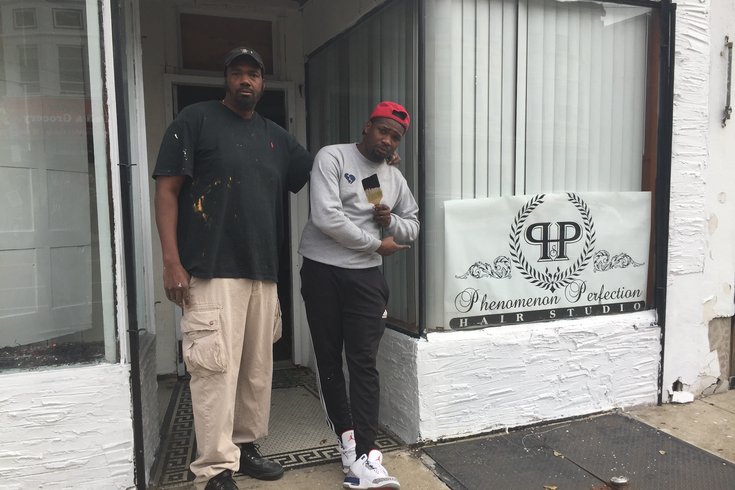 In happier times, Brennon Jones (right) and Sean Johnson worked together to ensure Phenomenon Perfection Hair Studio was ready for its grand opening. Less than six months later, they're leveling accusations about fraud against one another.

Back in November, the 5900 block of Old York Road in Olney hosted a celebration marking a step forward for the city’s feel-good story of the year.

It was the grand opening of Phenomenon Perfection Hair Studio, a salon that “Haircuts 4 Homeless” barber Brennon Jones could call his own, courtesy of a fellow barber who said he appreciated his mission of kindness.

“Never in a million years would I have thought, on that first day, that this would happen,” Jones said at the time of going from providing free haircuts for homeless people on the streets of Philadelphia and beyond to running his own shop. “If someone told me it was going to happen, I’d have said they’re a liar. No way this would happen.”

But just a few short months later, that chapter of the feel-good story has ended.

In a tale that involves allegations of misunderstood property ownership and ambiguous intentions, Jones told PhillyVoice on Monday that the shop is no more.

The story deepens when the man on the other side of the ledger angrily claimed Jones owes him thousands of dollars. 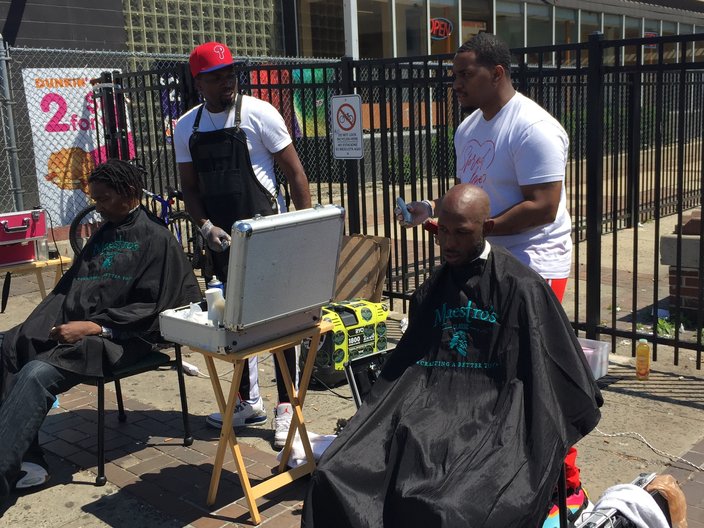 On the first day of his second 'Cutz of Compassion' tour, Brennon Jones (second from left) rued the loss of the Olney barbershop that was apparently mistakenly 'gifted' to him last November.

That man – Sean Johnson, owner of Taper’s Barbershop just a few doors away on Old York Road – said he is sick of hearing people claim he was in the wrong and staunchly maintains the exact opposite is true.

"I wish I never met him," Johnson said of Jones in a Monday night phone interview, puncturing the balloon of a story that inspired many. "I don't want my name mixed up with him."

THE MISSION CONTINUES AMID CONTROVERSY

Earlier in the day, Jones was among five barbers providing haircuts for the homeless outside the Walter Rand Transportation Center in Camden.

The list for cuts was 22 deep not even half an hour into the start of his second “Cutz of Compassion” tour inspired by the attention drawn after PhillyVoice first noticed Jones cutting hair at 15th and Walnut streets in January 2017.

The tour is his way of continuing a mission that has hit a road bump, but one that Jones said will not stop their efforts.

Jones said he was amped to have his own barbershop. A dream come true, it let him have a roof over his head all year, but particularly in the winter when conditions are subprime to cut hair outside.

The problems came to a head in late March, courtesy of a text message Jones received while away in North Carolina. Johnson told him he would change the locks on the building if he didn’t get paid.

Jones said Johnson had been quoted in numerous stories saying the shop was a gift to him. What kind of payment is involved in receiving a gift? Jones wondered.

Johnson has an answer for that: It was never truly a gift, but essentially reduced rent.

He said he pays $1,000 a month to rent the building, but would only charge Jones $800. It would ostensibly be free on Mondays, when he cut hair for the homeless, but a rent-paying business the rest of the week.

Muddling matters is that Johnson does not own either building. He rents. 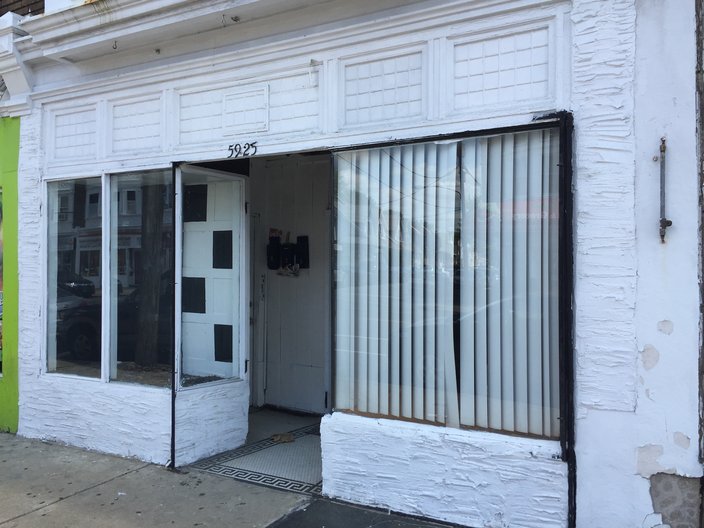 By the time Jones got back to town from North Carolina in early April, the locks had been changed. He was able to get inside to retrieve his hair-cutting equipment, but left his dream behind in a building that now sits vacant.

“I heard he was telling people that I wasn’t paying, but what am I supposed to be paying in the first place? He said it was a gift,” said Jones, who’d already been asked to cover the electric bills in the shop shortly after opening. “I’m still confused by the whole thing.”

Johnson started off a series of interviews this week by explaining that he laid out his case for a local news station that recently inquired about the Phenomenon Perfection salon’s closing.

He said he presented evidence of child-support issues that arose when, in his estimation, Jones wrongly claimed he worked for Taper's and officials from New Jersey inquired about garnishing his wages.

"People need to stop telling half of the story and more of the truth." – Sean Johnson

"He ain't paid me the money he's supposed to pay me, not one cent, and he's lied multiple times about it," said Johnson, arguing that Jones was supposed to start paying rent and covering utilities as of January 1. "Anytime you have a business, there's bills, and bills have to be paid."

Admitting there is no paperwork to back up that agreement, Johnson said there was a verbal agreement in September 2017 that Jones would start paying in January.

"What I have is proof, the actual proof, and he's lying like somebody put him out," Johnson said. "I just can't be involved with someone like that. He says I'm just trying to cash in on publicity? I owned Taper's since he was a kid. My barbershop already has a name. I didn't make a dime off him. We do stuff by the book around here."

No such agreement was ever made, countered Jones.

Johnson's tone and anger intensified as he laid out his case, claiming that he feels used by someone who just wanted a location to use during the winter.

"He never wanted to stay there. He's just wants money through his non-profit now that he got it set up. I just can't be attached to this anymore. People need to stop telling half of the story and more of the truth," Johnson said. "He just used me and my building for his own come-up."

"He won't produce the license. He'll hang a picture of him on 'The Rachael Ray Show' on the wall, but not a license. You're supposed to hang a license. It's a source of pride," he said. "If I don't close it, L&I will come in and close it, and I'll be the one who gets hit with fines."

As for the lack of paperwork defining the arrangement, he noted that he didn't find it necessary since he was paying $2,000 a month to landlords for the two locations, essentially subletting to Jones.

"He doesn't want to do the right thing, and now he's out on tour so he doesn't have to worry about it anymore," Johnson said. "I have grandkids. I can't pay someone else's bills. I paid for him the whole winter but nobody's saying that."

A search of the Department of State's website offered no record of Jones having a barber's license. The department's director of communications, Wanda Murren, did a deeper search of their barber and cosmetology databases as well, and found no records of Jones being licensed in Pennsylvania.

For his part, Jones said there's good reason why he isn't a licensed barber in Pennsylvania: he's licensed in Delaware. That's an issue thanks to the lack of licensing reciprocity (and the fact that the Department of State's director of community relations could not find a past or present license issued under the name Brennon Jones), but not when free haircuts are being provided.

He was taken aback that Johnson would throw dirt regarding child-support issues (which he admits exist) and claim that he'd agreed to pay for the space at all.

"If we had an agreement, which we didn't, why did he go on national television and say the shop was a gift? Why didn't he just say, 'I'm going to give it to him on Mondays,'" he said. "Let's take everything else out of the equation: What he said is what caused these issues."

He rued the fact that his one-time supporter has gotten personal and chalked it up to the backlash inherent in the shop being shuttered.

"I'm not a bitter guy. It was easy for me to move on after the shop closed. But I don't want to tarnish my reputation and who I really am," he said. "Everything he's saying is a way to take the heat off what he did.

"My situation had gone viral. State representatives, city officials, everybody was at the opening. If there was a problem, L&I would've come by the second I tried to open the shop, but they didn't."

He alleged that Johnson was the one facing financial concerns.

"If you were in his shoes, back against the wall, you'd try to figure out a way to get the heat off you. I get it," Jones said. "But some people, you can't do wrong to. People support what I stand for and what I do."

To hear Jones tell it during a break giving haircuts in Camden, he’s not as sad for himself as he is for the people he helps.

“I’m disappointed for them,” he said. “Everything happens for a reason, but sometimes it’s hard to explain that reason to other people. I’m not going to stop doing this. We’ve persevered through many things.”

Just as he finished saying that – an allusion to the time that the city Department of Licenses and Inspections temporarily shut him down – a N.J. Transit Police sergeant approached asking if Jones had a permit to be out there cutting hair.

After a two-minute exchange during which Jones established that free services were being offered, the sergeant started walking away as he said, “As long as you’re doing good for the homeless, that’s good by me.”

As fellow barbers Natasha West, Johnl Fooks, Stevie.55 and Idemar Cordero continued working on a sunny Monday, Jones rued the loss of sponsorships and TV appearances that dried up once the shop was closed.

Jones, who'd been honored by Philadelphia City Council, posited that Johnson saw the chance to piggyback on his efforts to get some positive publicity, an accusation which the latter shrugged off.

“Maybe he saw an opportunity for himself and capitalized,” Jones said. “I was very skeptical in the beginning. I should have been more skeptical.”

For his part, Johnson said he's so ready to move on that he already found a new tenant for the short-lived barbershop's former location. To Jones, that means Johnson saw a way to get money from a tenant as opposed to helping someone to whom he'd given a gift.

"He's obviously going to keep going until he gets a story that paints me as a bad guy," Jones said. "You can take what he said and draw your own conclusions, but it starts to make perfect sense when you hear what I just told you."

The Cuts of Compassion tour, made possible by donations that Jones needs to keep the mission going, continues next Thursday and Friday in Atlanta, before continuing on to Wilmington, Del. on May 21, Washington, D.C. on June 10 and dates to be determined in Baltimore, New Orleans and New York City.