How much snow, if any, will yet another coastal storm bring to Philly? 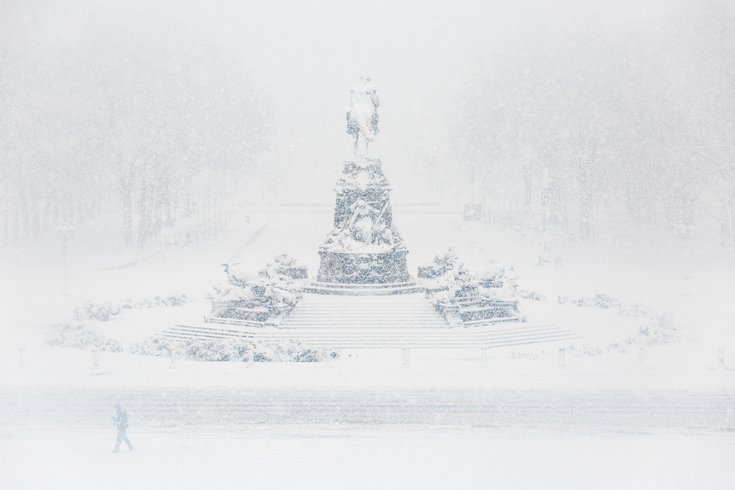 The view of Eakins Oval from atop the steps of the Philadelphia Museum of Art during a nor'easter that dumped heavy snow in Philadelphia, Wednesday, March 7, 2018.

Yet another coastal storm could affect the Philadelphia area early next week, but the weather forecasts surrounding it are foggier than usual.

That was the message delivered on Saturday morning by Walt Drag, a lead forecaster for the National Weather Service.

FORECAST UPDATE: Will next nor'easter graze Philly (2 inches of snow) or be a direct hit (8 inches)?

As of now, forecasters expect some rain or snow to the southeast of Philly on Monday. The city could see a little of it – about a half-inch or so, forecasters said.

But the early predictions also made clear that forecasters aren't at all sure about this one.

"I don't think the models are cohesive here," Drag wrote. "Forecast uncertainty continues and haven't said too much yet about what may happen."

Early on, the weather service gives Philly a 10 percent chance of receiving six inches of snow from the storm.

"A rapidly intensifying ocean storm may affect the area with snow or rain Monday and Monday night," the NWS stated early Saturday morning. "At this point, forecast confidence regarding extent of snow coverage and amounts remains below average. Snow amounts will depend on the storms track as well as surface temperatures."

Those are some pretty low probabilities for the Monday storm. Worth watching but wouldn't be adjusting any plans at this point in time. pic.twitter.com/SjkFvMI7r2

After the system passes by, expect chillier-than-normal temperatures for a few days and a good chance of some scattered rain and snow for areas north of the city, forecasters said, adding that Friday could mark the start of a warmup.

Saturday night: Mostly clear, with a low around 28. Northwest wind 6 to 8 mph.

Sunday night: A slight chance of snow after 1 a.m. Mostly cloudy, with a low around 33. North wind around 6 mph. Chance of precipitation is 20 percent.

Monday: A chance of rain before 1 p.m., then a chance of snow. Cloudy, with a high near 40. Northeast wind around 7 mph. Chance of precipitation is 50 percent. New snow accumulation of less than a half inch possible.

Monday night: A chance of snow before midnight, then a slight chance of snow showers after midnight. Mostly cloudy, with a low around 31. Chance of precipitation is 30 percent.

Tuesday: Partly sunny, with a high near 44.

Tuesday night: Partly cloudy, with a low around 27.

Wednesday: Mostly sunny, with a high near 41.

Wednesday night: Partly cloudy, with a low around 29.

Thursday: Mostly sunny, with a high near 47.

Thursday night: Mostly clear, with a low around 30.