Will next nor'easter graze Philly (2 inches of snow) or be a direct hit (8 inches)?

Snow covers trees and the road on North 21st Street in the Fairmount section of Philadelphia on March 7, 2018.

They say bad things come in threes – though that may not be necessarily true for skiers, plowing companies and schoolchildren.

Especially when you're talking winter nor'easters.

UPDATED FORECAST: For now, nor'easter looks to spare Philly from much snow

The third such storm in 11 days is taking shape for Monday night into Tuesday morning though forecasters remain uncertain just how much snow will fall on the Philadelphia region.

Winter weather advisories are likely for parts of the area, forecasters said.

At minimum, the region looks to see a couple inches of snow – probably lighter and more powdery this time around thanks to colder temperatures – according to the National Weather Service, which warns of potentially slippery conditions on the roads late Monday night and Tuesday morning.

But like so many coastal storms, the full impact is dependent on how close this more classic winter nor'easter gets to the coast. 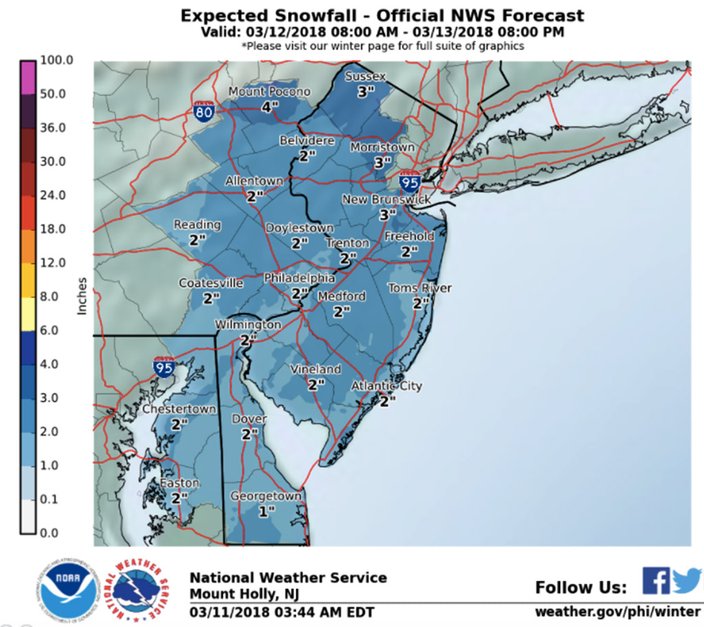 If the track keeps out to sea...

If it tracks further out to sea, there could be little snow across the area, even though a chance of a light rain/snow mix, especially along the coast, would remain.

With a track closer to the coast, the impact would become greater. The storm would likely result in higher snow accumulations across the region, and along the coast a more wintry mix along the coast would be possible. 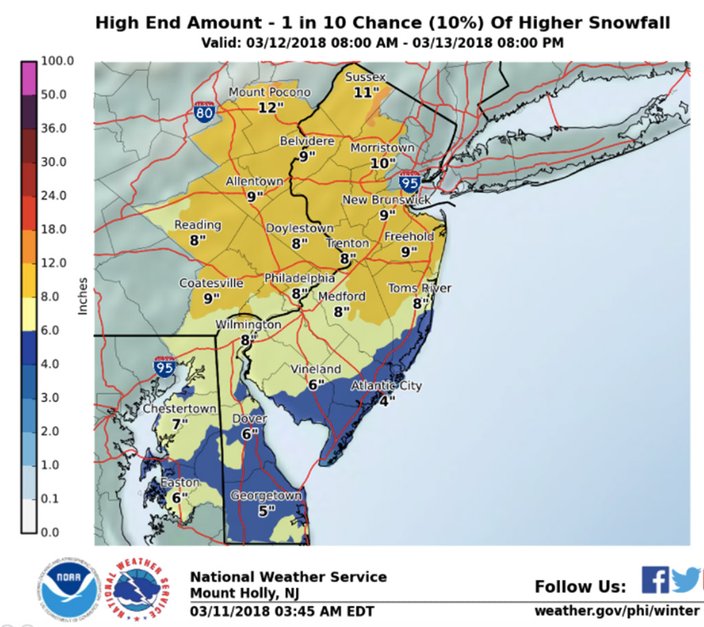 If the track moves closer to the coast...

Meanwhile, PECO announced Sunday morning that power was finally restored to the last of customers affected by the tow recent nor'easters. Since March 2, when Winter Storm Riley hit the region, and through Winter Storm Quinn, which struck five days later, about 750,000 customers lost electricity.

PECO said the large majority of customers impacted by Riley were restored by Tuesday night, and crews continued to work 24-7 to restore service. Repairs to the massive and widespread damage to the electric system were then complicated by additional damage caused by Quinn.

Looking ahead to next weekend, there's at least a chance for more messy weather. More to come as that weather picture develops.

Here's the 7-day forecast from the weather service:

Sunday afternoon: Mostly sunny, with a high near 47. Northwest wind around 10 mph.

Sunday night: Partly cloudy, with a low around 30. Light and variable wind becoming northeast around 6 mph in the evening.

Monday: A chance of snow before 2 p.m., then rain likely between till 5 p.m, then rain and snow afterwards. Mostly cloudy, with a high near 40. Northeast wind 7 to 10 mph, with gusts as high as 20 mph. Chance of precipitation is 60 percent. New snow accumulation of less than a half inch possible.

Tuesday: A slight chance of snow before 1 p.m., then a slight chance of rain showers. Mostly cloudy, with a high near 44. Northwest wind 11 to 15 mph. Chance of precipitation is 20 percent.

Tuesday night: A chance of flurries. Partly cloudy, with a low around 29.

Wednesday: Scattered rain showers before 5 p.m., then scattered rain and snow showers. Mostly sunny, with a high near 42. Chance of precipitation is 30 percent.

Wednesday night: Scattered snow showers before 7 p.m. Mostly cloudy, with a low around 28. Chance of precipitation is 30 percent.

Thursday: Partly sunny, with a high near 45.

Thursday night: Partly cloudy, with a low around 31.

Friday: Mostly sunny, with a high near 48.

Friday night: Partly cloudy, with a low around 33.

Saturday: Partly sunny, with a high near 50.