Would a Trump retweet save a struggling 'American Owned' A.C. Boardwalk T-shirt shop? 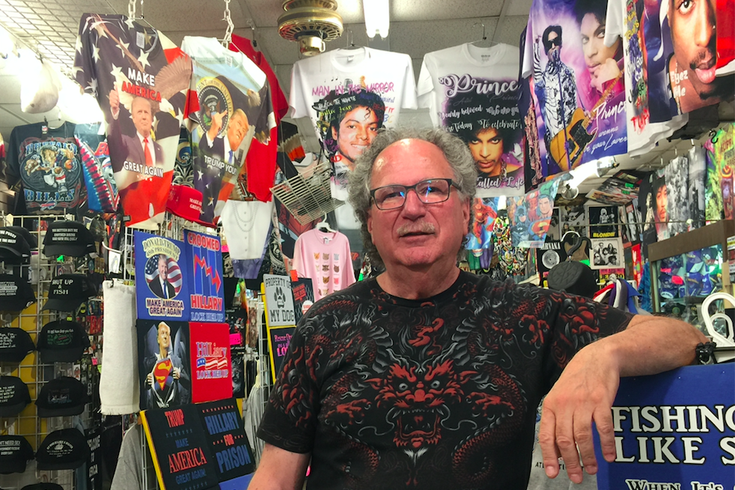 The Pier 21 T-shirt and novelty shop on the Atlantic City Boardwalk is the latest location for a business that's been in Todd Lovitz's family for nearly seven decades.

On the Atlantic City Boardwalk – exactly halfway between a pair of shuttered casinos with façades that once prominently featured the current president’s name – sits a family business that’s called the seaside resort home for more than six decades.

Prominent red letters, all capitalized, on its weathered façade proclaim that the Pier 21 T-shirt and novelty store is “AMERICAN OWNED.”

In today’s “outrage nation” dynamic, some might condemn such a proclamation as politically incorrect. Others might question whether it’s xenophobic. And yet others would proudly wave the stars and stripes and walk right in to the store to Buy American.

On Wednesday morning, I did none of the above.

Rather, I strolled in with a notebook and asked owner Todd M. Lovitz to tell me his story as a business owner in a unique city that’s seen ebbs, flows and everything in between through the years.

He happily obliged, with the caveat of going off-the-record at various points in our hour-long chat.

(And, yes, we also talked about Donald Trump to the point of Lovitz posing in front of a display of Trump- and Hillary-inspired merchandise. His hope? That the president would see and, hopefully, Tweet it out to help him keep his business above water as he waits for the next upswing. More on that later.)

In the early 1950s, his mother Anne, Aunt Blanche and their spouses Milton and Al opened up ABC Toys and Gift Shop along the Boardwalk. It was located on the land currently featuring the shuttered Trump Plaza Hotel and Casino. The ABC in the shop's name translated to Anne, Blanche and Children.

Lovitz was a newborn back then. The families regularly commuted from Brooklyn, New York – where they had a wholesale toy business – to Atlantic City, a trip made particularly more difficult because the Garden State Parkway wouldn’t be complete until 1957. 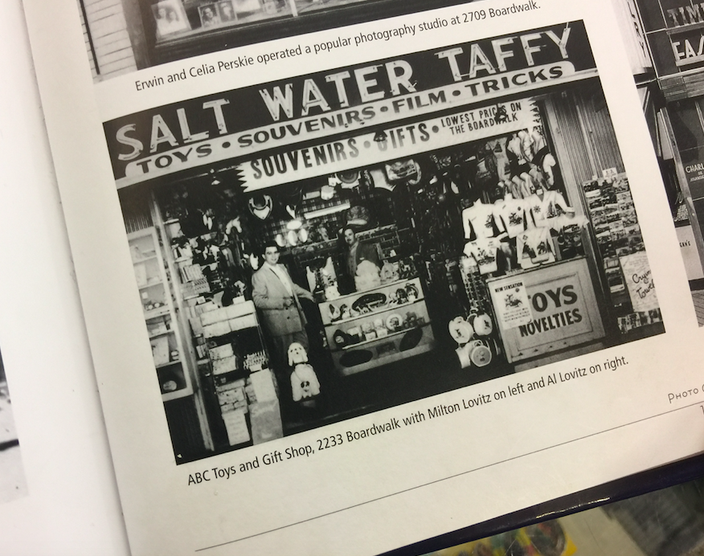 Todd Lovitz shows a photograph from a historical photo-book that shows his family's business during Atlantic City's heyday.

But, persevere they did, establishing a business that saw several stores open in America’s Playground which would be passed down to a generation that included Lovitz and his cousins.


As kids, they’d worked summer jobs in Atlantic City. Lovitz ventured off to study at Philadelphia Textile (which is now Philadelphia University) and live in Germantown. The lore of the shore would draw him back in the 70s, though.

“Family’s tough,” said Lovitz, 66, explaining how the relatives splintered off from a joint operation into individual businesses that still exist today amongst the second generation in Atlantic City and Stone Harbor.

Today, Lovitz is the sole proprietor at Pier 21, which is located between MLK Boulevard and Kentucky Avenue along the Boardwalk not too far from The Claridge.

He said he’s able to stay open, but it’s a struggle. A six-employee operation is now down to just him.

The problem with A.C.

He’s the type of guy who writes letters to the editor and reaches out to those in political power via Facebook.

His message to them can be best summarized as this: Incompetence is what’s holding Atlantic City back and his best hope for a turnaround hinges on Hard Rock International’s plans to revitalize the nearby Taj Mahal site.

If that goes well, the trickle-down effect could impact his sliver of the storied boardwalk.

“We’ve seen everything, the ups and downs, for years till now,” he said at the counter as a lone customer browsed the shirt selection seemingly more extensive and varied that of most boardwalk competitors.

He chided city and state government – and the Casino Reinvestment Development Authority – of being “incompetent” and having no clue how to properly market a resort that should be a gleaming attraction by the ocean instead of a crumbling vestige of its glory days.

He has numerous unfit-for-print words about Gov. Chris Christie. Among the comments that are fit for print: He deeply regrets having voted for the outgoing governor not once, but twice.

He said he passed on façade-improvement grants because they would have contractually turned into loans if he didn’t complete the projects by the timeline set forth by CRDA.

He chuckled when he recalled five men in suits walking into his store trying to convince him to take their deal, specifically because he turned it around and asked one of them if he'd sign off on a $400,000 grant that could become a loan.

Online gaming, he said, didn’t help matters much, either. In fact, it might hurt as much as gaming expansion in nearby states.

He’d prefer it, though, if people who gambled online were required to come to Atlantic City to collect their winnings, should they have been lucky enough to not lose.

He has a simple proposal that could turn around those marketing ills, though.

“It’s a simple thing: You see those (CRDA) ambassadors all over the Boardwalk? I’d have them handing out flyers with a full schedule of events for the summer,” he said. “All the stores, all the jitneys, all the tram cars, the hotels, have them everywhere.

"We’d gladly put one in every customer’s bag, because that would bring us more business, but nobody has the sense to do that.”

A glass-case display halfway back into the story aligns with the business card that describes the business as “’Very Proudly’ American Owned And Operated For Over 67 Years.” It features caps and patches for all branches of the military. 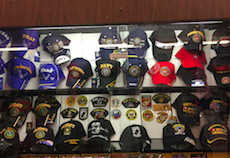 Military items are on display at Atlantic City's Pier 21 T-shirt and novelty store.

Asked about the “AMERICAN OWNED” signage out front, he said it wasn’t a slight on competitors as a whole. Rather, there was a shop owned by a Pakistani that, he claimed, boasted of American ownership, and products, when both were far from the truth.

The way that competitor treated his workers – subpar, under-the-table wages – insulted him to the point that he had to draw a marketing distinction years ago.

“He was taking advantage of his own people,” Lovitz said. “If I did that, I’d be in jail.”

He said he doesn’t get much pushback from competitors or customers. It's bolstered his customer base, with the drawback being "obnoxious" people who come in to cheer America but not purchase any items.

Then, there’s the matter of Donald Trump, a figure so closely aligned with Atlantic City that the relationship became a prop in the presidential campaign last summer.

Lovitz said he doesn’t mind the fact that Trump came to town, declared bankruptcy a few times and fled with a profit, a dynamic that he’s boasted about.

He had choice words for Hillary Clinton, though. As in, “Hillary should be in jail.”

We didn’t delve into his reasons for believing that, but above a glass case containing shot glasses and the like was a bumper-sticker collection that could help explain it. Among the entries: “LOCK HER UP!” “TRUMP THAT B****” and “Liberalism is a Mental Disorder.”

He reserved his harshest judgment for the coverage, and reaction, to Hurricane Sandy, though. Namely, a widely seen photograph of a piece of the Boardwalk floating in the street in the city’s Inlet district.

It mattered little that it was from a long-ignored section of the attraction outside of the retail and tourist district.

It still became the image that many across the country came to associate with a resort town that escaped major damage. Lovitz said people still tell him, five years later, that they're surprised Atlantic City "recovered" in places left hardly damaged from the storm.

“When Trump talks about ‘fake news,’ that’s what it’s all about,” he said. “They don’t understand what that image did to this town. Chris Christie should have been up here with Al Roker saying the Boardwalk is fine and open for business. Instead, he’s up in Seaside Heights. Where’s the tax revenue coming from?

“All we want is for someone to give us a chance. There is no excuse for this town to be empty like it is.”

At that point, Lovitz said that friends and customers always tell him he should try to draw the president’s attention to his prominently placed Trump T-shirt and hat display. 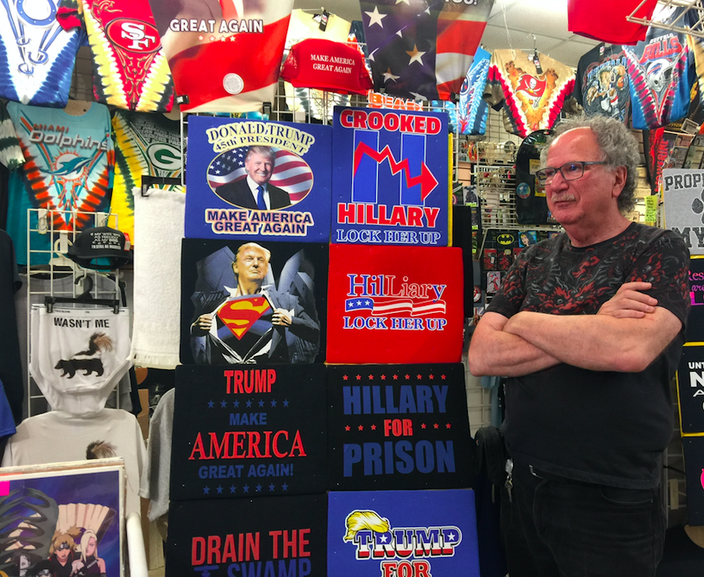 Todd Lovitz, owner of Pier 21 T-shirt and novelty store on the Atlantic City Boardwalk, said friends have told him he should get a photograph of his Donald Trump display in front of the president.

When I told him to pose in front of it and promised to @ the president when I posted it online, it was the happiest he was all afternoon.

A retweet from the guy who fled town long ago, it turns out, was the kind of thing that could help him bide the time and keep his business afloat until a new casino revitalizes a site that once offered promise but now sits barren.