Howard works out in Clearwater; Rollins signs with White Sox 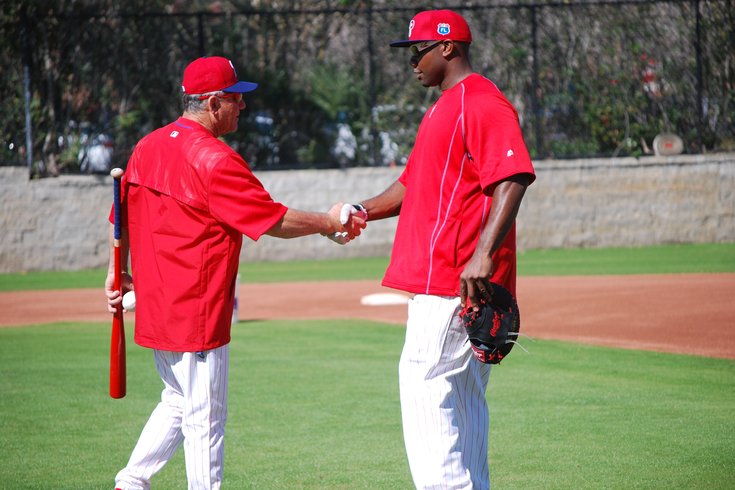 CLEARWATER, Fla. – On the eve of the Phillies first full-squad workout, Ryan Howard changed into his red pinstriped pants for the first time in 2016 and took batting practice at Bright House Field, where Charlie Manuel and Mike Schmidt were among those watching around the cage.

Howard moved his voluntary workout back through the clubhouse and onto the short practice field later, meeting with Larry Bowa and taking infield work with shortstop Freddy Galvis. Howard, who is almost certainly entering his final season with the Phillies, is scheduled to talk to the media on Tuesday.

“It was good to see him,” manager Pete Mackanin said. “I knew he would come in shape and he had a big smile on his face, as usual. He’s ready to go. The think I like most about Ryan is he posts up every day. He comes to play.”

Howard, 36, is one of two members of the 2008 World Champion Phillies that remains on the roster, along with catcher Carlos Ruiz. Both have team options in their respective contracts for the 2017 season, but neither is expected to be picked up as both players have deteriorated with age and the front office is in full rebuild mode.

For the second straight spring, Howard enters camp after a somewhat tumultuous offseason.

A year ago, he arrived after a lawsuit his family filed against him became public. This year, it’s after filing his own lawsuit against Al Jazeera, which alleged in a report that Howard used performance-enhancing drugs.

In the December story on the network’s soon-to-be-defunct American television station, Al Jazeera claimed Howard used Delta-2, “a hormone supplement that is ‘steroidal in nature’” and is banned by Major League Baseball.

Howard issued a statement with his lawsuit, which was filed 10 days after the report. But he has barely spoken about it since and will surely be asked about it Tuesday, even if he cannot legally discuss much of anything.

And then there is the issue of possibly playing less once the season begins. Last month, Mackanin said he would consider platooning the lefthanded-hitting Howard with the righthanded-hitting Darin Ruf.

Like Ruiz in 2015, Howard could stand to lose more regular playing time in 2016 as the Phillies turn the roster over to younger players. Mackanin said he hasn’t spoken to Howard about it yet, but probably would do so on Tuesday.

“I think he knows, he’s read and seen and heard what I’ve said,” Mackanin said. “He knows that he’s got a challenge ahead of him and he has to compete for those extra at-bats against left-handers. I think he’s ready for it and I think he’s willing to show that he deserves to be in there every day.”

Howard, a three-time All-Star, former National League Rookie of the Year, NLCS MVP and N.L. MVP, first checked into camp on Saturday to drop off some equipment. He went through a regular, voluntary workout with other position players on Monday.

“He loves to play the game,” Mackanin said when asked if he was surprised Howard worked out with the team before official workouts, something he has actually done throughout his career. “When you look back over his career, he comes to play every day and never asks for a day off. He’s a solid guy in that respect.”

Jimmy Rollins, another former Phillies MVP of the 2007-11 era, is no longer a free agent. Rollins signed a minor-league contract with the Chicago White Sox on Monday.

Rollins racked up a franchise-best 2,306 hits in 15 seasons with the Phillies. He is expected to compete with 26-year-old Tyler Saladino for the White Sox starting shortstop job.

According to foxsports.com’s Ken Rosenthal, Rollins turned down big league offers from multiple teams that were offering him utility jobs, instead opting to sign with a team that gave him a chance to compete for a starting job.

Mackanin said Monday that he was “not overly surprised” that Rollins had to accept a non-guaranteed, minor league contract.

“He’s getting close to – he’s probably lost a step,” Mackanin said. “He’s still a solid player. But, actually, other than saying I’m not surprised is all I can say.”