By Aubrey Nagle
PhillyVoice Contributor
Restaurants Pop Up Spaces
from 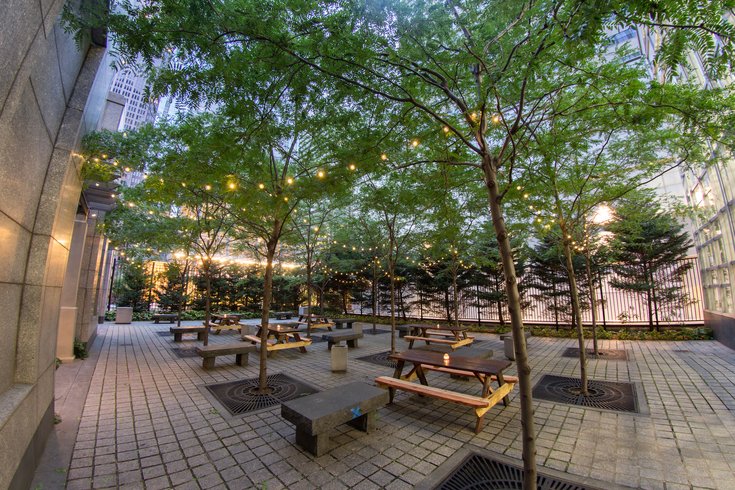 The scene at the new Uptown Beer Garden in Center City.

Philadelphia Business Journal has reported that Teddy Sourias, the owner of Bru Craft & Wurst, U-Bahn and Finn McCools Ale House, is opening up a 9,000 square foot beer garden in Center City. The pop-up space, opening July 1 at 4 p.m., is called Uptown Beer Garden and is located in the BNY Mellon Bank Center courtyard at 1735 JFK Boulevard.

The pop-up will reportedly run through September and can accommodate 500 guests. The 35-foot bar will feature wine, spirits, six craft drafts and a variety of craft cans. The kitchen will also offer bar snacks, sandwiches and desserts. Like many of Philadelphia's ever-popular beer gardens, it will have plenty of picnic tables, communal seating and outdoor lighting.

Foobooz has reported that Uptown will participate in Center City Sips -- like discounts on Wednesdays, as well as happy-hour deals Monday through Saturday from 5-7 p.m., including $3 beer and $5 wurst sandwiches.

A portion of proceeds from the new digs will be donated to Philadelphia Animal Welfare Society and their Kitty At The Office foster program. Look for pop-up events throughout the summer, including a "Yappy Hour" and a pop-up with Philly Phaithful.

Uptown will be open Monday, Tuesday and Thursday from 5-10 p.m., Wednesday from 4 p.m.-midnight, Friday and Saturday 2 p.m.-midnight.