“Being a trans person is not all before-and-after," says Leo Caldwell. "The next thing is seeing gender on a spectrum and with wider acceptance." 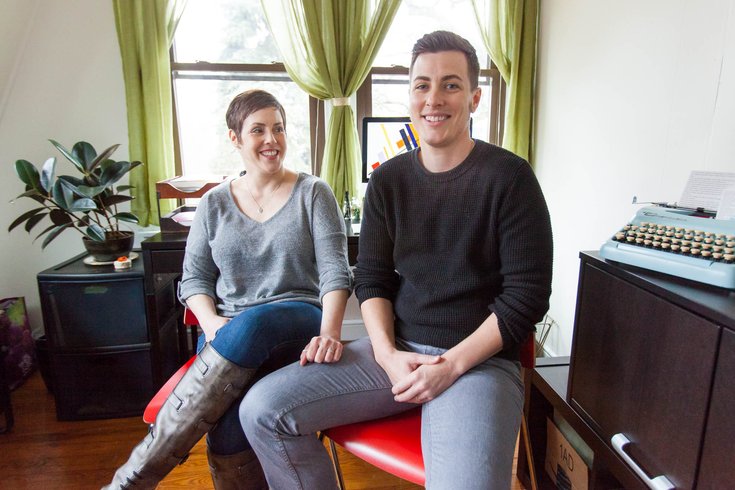 Leo Caldwell, right, and his wife, Amy, in their Merchantville, Camden County home.

Searching for her identity, she joined a Pentecostal church, traded in her pants for skirts, let her hair grow long, and spent free time praying with a youth group.

Leo Caldwell, now a transgender man, says his younger self “was trying to pray the gay away.”

“I got called a faggot,” said Caldwell, 33, an e-learning developer, online blogger, newspaper columnist, and a former digital newspaper editor.

“But I realized I could not change,” he said, sitting in the kitchen of his home in the South Jersey suburb of Merchantville, which he shares with his wife, Amy, and his stepson.

“All identities intersect to make us. I try and stay away from labels when I write now. And when I use them, they are in quotes – as though they were air quotes." – Leo Caldwell

“I always knew I liked girls,” said Caldwell, who “identifies socially as masculine, but legally and spiritually as feminine.”

First, wearing pants, but underneath skirts. Then a close haircut. A loss of connection to the Pentecostal church's version of God.

An art student, then a digital studies student back at Ball State University in Indiana, Natasha Caldwell began to come out by negotiating her changing identity, which she variously thought of as lesbian, then gay, and finally queer.

Overwhelmed, Natasha dropped out of college for a few years, but kept trying to place herself somewhere on the gender spectrum.

'I DIDN'T WANT TO HATE MYSELF'

Help for sorting it out was found in a book by Kate Bornstein titled, "My Gender Workbook: How to Become a Real Man, a Real Woman, the Real You, or Something Else Entirely," Caldwell recalled.

After graduating, Natasha went to work for a local paper, assuming the outward trappings of “a butch lesbian.”

Muncie, Indiana is a small town and Natasha’s time there was difficult. “It is hard not to have a gender” because others don't know where to place you without clear cues and labels, he recalled.

As elsewhere, people tended to form like groups and stick to them. But the groups were smaller and less numerous in his home state.

“No one reached out to find out if I was in his or her tribe,” Caldwell said.

Natasha followed the paper’s publisher east to Cherry Hill, becoming Leo professionally, which is how he'd seen himself personally beginning three years before.

With a bump in salary as the digital editor at the Courier-Post, he decided it was time to break out a credit card and find a surgeon so she could stop binding her breasts. She began researching options for female-to-male "top surgery," which included having her breasts removed and chest reshaped.

In 2012, a doctor in Cleveland was chosen after much research.

“I didn’t want to hate myself,” he said of his decision to transition.

Despite counseling before and after the operation, the three-week recovery felt “way more intense” than the person transitioning from Natasha to Leo ever thought it could.

“I was emotionally devastated when I looked down. It was just weird,” said Caldwell, who has no plans for "bottom surgery" to reshape sex organs.

Low-dose testosterone therapy had begun in 2009. It felt strange to be sent to a women’s health center for doses of the hormone “to become a man,” he said.

The transition took getting used to over time.

“I’d liked going to gay bars, but now I don’t feel like I’m part of the group,” he said with a hint of wistfulness.

Leo had not told his parents before the surgery, but a posting he did on social media was discovered by cousins who soon outed him to the rest of his family.

The visit home was hard.

His dad, who is generally “chill,” became very quiet.

His mother reacted emotionally, focusing on how Natasha's change to Leo meant she'd have no grandchildren, which he tried to explain was not necessarily the case.

In fact, Caldwell now has a child, a stepson.

“I didn’t know how hard parenting was,” he said of life with a three-year-old.

Amy Caldwell had always dated men. She’d been married to a heterosexual guy for 12 years, the man with whom she had her son.

She knew, despite outward appearances, that Leo Caldwell was born female.

But she also felt a clear connection. She’d felt some attractions to certain women in the past, though nothing came of them.

This time, she said, she knew.

Homesick for the wide-open spaces of the Midwest, Caldwell made plans to return to Indiana. A week before the move, Amy asked him out to dinner. 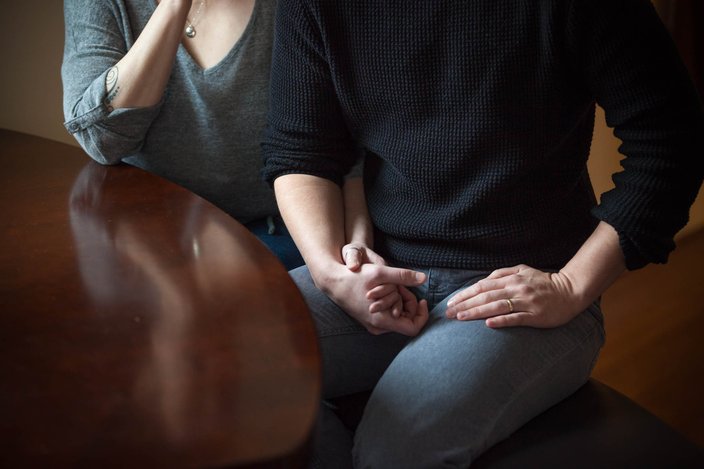 Leo and Amy Caldwell sit at their kitchen table during a recent interview.

He moved and they immediately friended each other on Facebook and flirted. And flirted more.

He came back to visit Amy in New Jersey the very next weekend.

And that’s how it was – text messages, social media, and weekend visits – until Caldwell drove 10 hours back to New Jersey to propose.

“It had been exhausting to date lesbian or straight girls before Amy," he said, explaining previous women had placed him in boxes where he didn't fit.

Finding his own level has been a journey that continues as he shifts slightly toward his feminine side after years of embracing masculinity.

He has pursued a personal level not just in his own life, but also in a very public way: online in several formats, especially in a personal blog, columns for several Gannett newspapers and on the Huffington Post’s Queer Voices section.

“I write to feel normal. I identify myself, discover myself, with writing. There is so much gray in this definition of trans," he said. “All identities intersect to make us. I try and stay away from labels when I write now. And when I use them, they are in quotes – as though they were air quotes.

“I was embracing my masculinity, but now I am moving away. It’s a journey and I’m always trying. Being trans is a struggle. It’s a lost community, at the boundaries of society.

“Being a trans person is not all before and after. The next thing is seeing gender on a spectrum and with wider acceptance," he said. "Gender is not a binary. That’s important to trans people.”