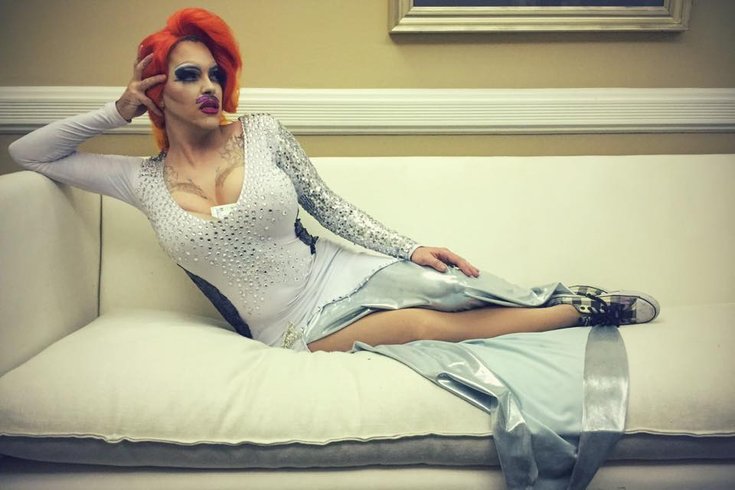 Look, drag queens' junk doesn't just smooth out on its own. There's a reason for -- and method to -- the feminine aesthetic that comes with a drag queen when she's doing splits on stage or lifting a leg over a chair. How they do it, though, is the perpetual mystery to the casual onlooker.

We asked Ryan Henaghan, who's performed in Philadelphia for three years as drag queen Mistor Fahrenheit, for an explanation.

In a nutshell, how would you explain 'tucking' to someone who doesn’t know the lingo?

Right. Well, 'tucking' is when you pull your penis and [testicles] in different directions and put them in unnatural places.

And what does that involve?

Well, it’s very uncomfortable, and there are a couple of ways to do it. Granted, I tucked for a long time but don’t do it anymore; I let it all hang out, and I wear a lot of bathing suits and am a bit of a bulge queen. So I don’t care as much about a tight tuck like some queens do. But you put your [testicles] basically back where they were when they dropped when you were 8 years old – or whenever they dropped – and put them back up in [the inguinal canal]. Which, I was at first convinced that could not happen, but my husband reassured me. You put them up there, pull the penis back, put on a makeshift gaff that holds everything in place, and put on three pairs of tights. And everything ends up smoothing out. ... And some queens will use duct tape to hold it back.

What is a gaff?

A gaff, the way I did it, is you cut the elastic band off a pair of underwear, and then cut the top off of a tube sock and put the elastic through the tube sock so that there are two holes. Then you slip those through your legs and pull all the way up, and it creates this kind of tight holding mechanism that holds it all in there. You put on tights after that so it won’t fall or anything like that.

What point is this in the drag makeup process?

Oh, it is the last thing that I do. It’s the very last thing I do before I put on my outfit. And if I’m tucking, I won't put the gaff on until the last second that I have to. And now that I don’t tuck, I get in drag at home and then go out because it’s not uncomfortable. When I’m tucked, I can’t sit down for more than three minutes at a time. I’m like, dying; it’s so bad. And forget about peeing -- I know a lot of queens who just don’t pee when they’re in drag.

I was going to ask about that. How do you pee in drag, especially since some queens do two- or three-hour shows?

Yeah, whenever I was tucked and had to pee, I would always ... it turns into a very 'meaty' tuck afterwards. There was never a smooth transfer back into a nice, smooth tuck.

Does it take long to tuck?

Nah, if you know what you’re doing, it shouldn’t take more than 30 seconds. If it’s your first couple times, maybe five minutes. Getting everything in place. Making sure everything's not falling out.

Has it ever come undone?

Not really. You have a pair of tights on, so nothing’s going to pop out – which would be funny. The main thing that can happen is your [testicles] re-dropping and that just makes things even more uncomfortable because you’re pushed all everywhere. If you come untucked mid-performance, you might have a crazy face on, because it’s not the best feeling in the world.

No! I would not push very hard. ... [Testicles] also go [into the inguinal canal] when you’re really, really cold. Give it a try! It’s very interesting, the male body. It’s not the most comfortable position, but they’ll slide right back up there.

Do most drag queens tuck?

Yes, every drag queen I know tucks. Except for me and my husband [drag performer Lili St. Queer]. Lili wears a lot of skirts, so you don’t really ever see. I wear a lot of tight dresses, so you can pretty much always see my penis. [Laughs] ... I always say, 'I have a mustache, so I can do whatever I want.' Most people I talk to, ‘Yeah, you can do that and it’s fine. Any other drag queen? It’s weird.’

If you had to describe the sensation of being tucked in three words, what would those be?

Miserable. Snatched -- it makes you feel like a snatched woman. And I’m going to go ahead and go with ‘miserable’ again.

If I could give my opinion, I’d say drag queens shouldn’t feel like they have to tuck to feel like a snatched drag queen. Because there are lots of different forms of drag that don’t always include a smooth vagina. So, if you want to be a bulgy queen, you go be a bulgy queen. And you own it.