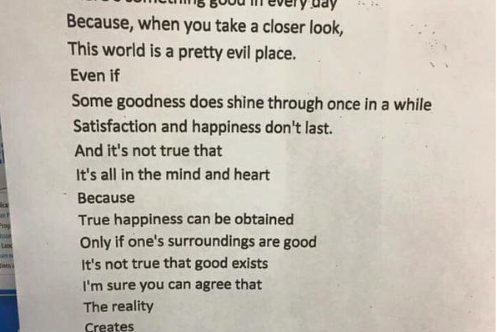 Sometimes we are all too susceptible to getting enveloped by negativity, whether it's the day's gory headlines, a troubling past, a scary future, or a general evaluation of the people and the world around us.

Works of poetry and long-form writing requires a more careful consideration of why we're influenced to feel this way, however, and at their best they reveal the degree of choice we all have in observing and experiencing positivity.

That reflection is pretty literal in the case of a poem that was found tacked to a wall at a bar in North London, which has since gone viral in part because of its message and in part because its journey exemplifies the power of the written word to encourage thoughtful dialogue.

Twitter user @ronniejoice happened to be moved by the poem and decided to snap a photo. Read through it and your first thought will probably be something like, "Wow, what a totally depressing and inartful screed exaggerating the misery of the human condition and squeezing subjectivity beyond any kind of balanced inventory of life," but then you'll read the final line.

When your eyes climb back up from the bottom, you find a very different message. More than anything, it's a beautiful reminder to look more closely at what we encounter before distorting it and ceding all meaning, or lack thereof, to cynicism and despair.

Even more interesting is that the poem, entitled "Worst Day Ever?", was written by Brooklyn teenager Chanie Gorkin, an 11th grader at an all-girls high school, and posted here at Poetrynation. That it ended up in London first before reaching millions is a strong testament to the world working in seemingly random, but more accurately mysterious ways.