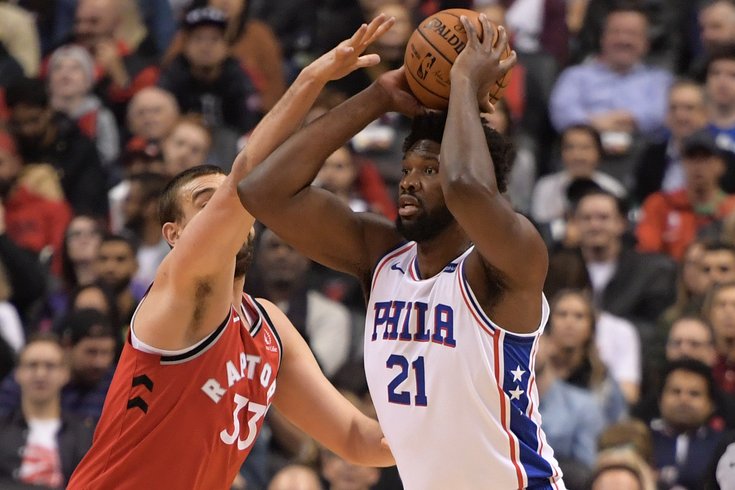 Joel Embiid was held scoreless in the Sixers loss to the Raptors.

Joel Embiid scored zero points, and yet the Sixers still had a chance to steal a game on the road in Toronto on Monday night. Unfortunately, Embiid continued to undercut the team right down until the final minute, and they went down in miserable fashion in a 101-96 defeat.

Here's what I saw in Toronto.

• If Josh Richardson never missed a jump shot again, the Sixers would be a pretty difficult team to beat. Though they certainly won't be expecting perfection, the Sixers have to be thrilled to see him finally finding a groove on offense after struggling out of the gate.

Building off of his dominant night against his former team two days prior, Richardson came out firing against the Raptors. And he needed to, because some of his teammates either couldn't shake off the old demons in Toronto or otherwise never showed much interest in shooting. That suits Richardson just fine, who is many things but definitely not gun-shy.

I'm sure most people will come away from that game dwelling on him missing three straight free throws after getting fouled attempting a three — I am not going to tell you not to be mad about that nonsense, for the record — and he didn't exactly light it up in crunch time, but he was mostly excellent again on Monday night. The Sixers would have been run out of the gym without him.

• Tobias Harris continues to do the little things well for Philadelphia. He made some critical defensive plays in the second half when things got tight, including a terrific strip on Raptors guard Fred VanVleet, and he gave the Sixers three-level scoring on a night where their best player looked like a European journeyman.

Harris is unique among Sixers players in that he doesn't go into the paint in fear of shot-blockers, which might lead to some misses and his attempts getting turned aside, but it is critical to have guys who will go at guys like Marc Gasol in the paint instead of letting them live there unchallenged. Harris had his ups and downs attacking the rim, but he came up with huge buckets there in the second half, helping to keep them afloat.

• It didn't end up mattering in the end, but Al Horford came up with some insane defensive plays down the stretch to bail the Sixers out of sloppy play. That'll get lost into the ether, but he deserved a shout out.

• Embiid continued his tradition of being unable to solve players who are big and strong enough to slow him down. Gasol has given him fits for years, and as we've discussed in this space before, Embiid tends to make life easier than it needs to be on guys like Gasol. He's not a player you can go through, he's one you have to make work in space, and there wasn't enough of that against Toronto.

Unfortunately for Philly, Embiid allowed Gasol's physical defense to take him out of the groove he has been in and he started forcing up some real junk, including some awful stepback two's that never had a real chance to drop. He is at his best as a shooter when he's shooting face-up jumpers with little movement and pre-shot dribbling involved, and he made life way too complicated for himself in Toronto.

(You guys know I advocate for Embiid to shoot threes even more than he does, but you also have to acknowledge when it's not your night. Instead, he tried to force up some terrible looks from out there. Not the move, my guy. Live to fight another day.)

Embiid couldn't even get out of his own way on defense. He picked up a stupid foul with a minute to play to give Pascal Siakam a chance to take the lead at the line, and his fellow countryman made him pay for the mistake. Bad nights on offense happen, but people consider him a superstar because he can overcome them on the other end. He responded poorly.

Did playing the third game in four nights have something to do with it? Maybe, but I don't think anyone should lean on that too heavily as an excuse, especially because his minutes were down on Friday and Saturday. He needs to figure out a better plan against guys like Gasol because the current iteration isn't working.

• This is a lot easier for me to say from the media seat, but if Brown was willing to bench Horford down the stretch against the Knicks last week, he should have been willing to sit Embiid on Monday night to get the win. It was very obvious that Embiid did not have it, and Philadelphia's best spurts came with the franchise player sitting on the pine. You could see how difficult things got for the Sixers with Embiid playing in crunch time — the Raptors did not fear him at all, and shots got tougher for the guys who did have something going as a result. The two-man game was a pointless waste of time.

Benching the franchise player is a lot different than benching nice guy Horford, of course, but if ever there was a situation to play that card, it was in this game. I think it's fair to second guess going back to a guy who didn't score a single point.

• We'll start with the good for Ben Simmons, who largely controlled the first quarter for Philadelphia and was given the chance to play a few extra minutes as a result. Simmons was absolutely dealing as a passer, and with the Sixers' halfcourt offense mucking up time after time, his work in transition was essential in pushing them to an early lead.

And yet in the first half, all the old Simmons trappings were there too. He was getting into the lane at will at times, but he refused to attack the Raptors at the rim for long stretches of the game and it hurt more than it helped. He corrected that early in the second half, with Simmons coming out of the tunnel ready to get downhill and invite contact, but Simmons didn't end up sustaining that into the fourth quarter, and it added to an already difficult night for Philly on offense.

The biggest challenge for Simmons is figuring out how to draw the line between getting his teammates involved and taking games over with his size and athleticism, and though they have benefitted from his team-first focus lately, this was a night when they needed the more aggressive version of Simmons. Simmons knowing that switch needed to be flipped is a good sign, but I would love to see more games where he's just taking more shots so teams can't just cheat into passing lanes, even if he doesn't make as many as he would like. Aggressive basketball is good basketball for Simmons.

(I know a lot of people will be pissed at the final turnover from Simmons, but the lob to Harris was on, that's just an execution problem. The bigger mistake was losing track of the clock at the end of the game, throwing up a desperation shot instead of finding one of his shooters in the corners.)

• Foul trouble is a problem for a lot of defensive-minded players when they first hit the NBA, big men especially, so Matisse Thybulle struggling to stay out of foul trouble is certainly not a death sentence for his career. But he has habits that he has to clean up if he wants to be part of the playoff rotation, because right now he's being taken advantage of by more experienced players whenever he takes the floor.

Thybulle picked up three fouls in the span of about two minutes to open the second quarter, and a couple of them were cheap ones where he just got caught reaching. When you're playing against a bunch of future accountants and investment bankers in the Pac 12, you can afford to take more risks. Darting into passing lanes is one thing, wildly slapping at balls is another. NBA players are too smart for that.

I actually liked the move from Brett Brown to leave him in the game and force him to play through it. Brown has been quick on the trigger with Thybulle at times this year, and there has to be some balance with the approach the head coach uses to get his rookie up to speed.

• The big reason Brown needs to stick with Thybulle comes attached to big yellow shoes. Furkan Korkmaz has had a breakout season on offense, but while he is competing hard on the defensive end, he just has no chance when modern NBA wings go at his chest and dare him to hold his ground.

When teams are hunting matchups in the playoffs, or even in games against elite teams, Korkmaz is going to be walking around with a target on his back. If he can catch a heater the Sixers will be able to live with him in short bursts, but when he can't, it's going to be a field day for the opponent.

• I don't say this lightly when I tell you this is one of the worst lob attempts in the history of professional basketball.

Horford is an excellent passer, but perhaps he should not try many more of these in transition.