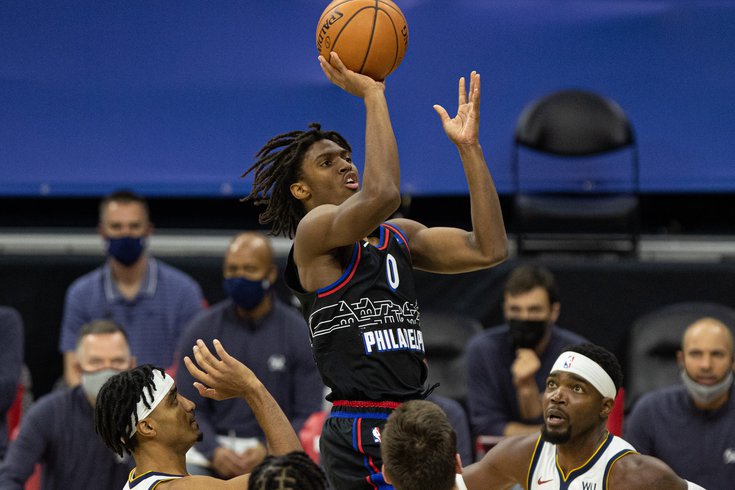 The seven-man Sixers made a game of it for about 24 minutes, but the Nuggets overwhelmed them in the second half to coast to a 115-103 victory over Philly. Tyrese Maxey was the human silver lining, dropping 39 points and running the show for most of the afternoon.

Here's what I saw (with an emphasis on the fact that there are going to be a lot more moral victories than normal).

• If the Sixers were supposed to show up for this game and just lay down for an easy Nuggets win, somebody forgot to tell Maxey. Doc Rivers basically gave him the ball and told him to figure it out, putting the rookie guard through a gauntlet of pick-and-roll looks and often asking him to create something out of nothing in isolation.

Maxey was more than up to the task, dropping 22 points on the Nuggets in the first half alone. Jamal Murray was arguably the standout player of the NBA's bubble last summer, and Maxey put him in the torture chamber in the first half, blowing past him while not being punished too much on the defensive end of the floor.

The only real difference between the Maxey we saw on Saturday afternoon and the Maxey we see on a regular basis was the type of shots he was allowed to take. His floater/runner game was there like it always is, but without the big mouths of the stars to feed, Maxey got a little more adventurous as a pull-up shooter, which didn't necessarily lead to great results but forced Denver to consider the possibility of more than just attacking the rim.

(One thing I do want to spotlight and might write about in more depth later — I thought Maxey did a better job of seeking out contact around the basket than he had in any other game to date. He wasn't rewarded with trips to the line, but on at least two occasions I can recall, he got into Nikola Jokic's chest enough to move back Denver's All-NBA big man and create a window to score through. That's the sort of thing small guards need to master to last in the league.)

I thought Maxey was a better passer on Saturday than the assist numbers give him credit for. He was the only guy who could consistently put pressure on Denver in the paint to force their defense to collapse, and when guys did cheat toward the rim, Maxey found open teammates without exposing the Sixers to much of a turnover risk.

Maxey's composure has stood out game after game during his opening stretch as a pro, and he was one of the big reasons Philly hung around despite being way outgunned on Saturday.

• Isaiah Joe is basically drawing dead anytime he has to fight through a screen on defense — he is still notably skinny compared to most of the guys he's up against — but the Sixers have made a bet that they can help him through that process and take advantage of his shooting in the meantime. Joe was uneven as a shooter but he got his looks up without leaning too far toward the "gunner" side of the spectrum, letting the game come to him.

That last bit is important because Joe's tunnel vision was pretty bad at times at Arkansas, and the Sixers seem to have gotten it into his head that he's just one piece of a bigger unit here, even when they're down to seven players. He certainly has the touch and quick release of a big-time shooter, though he will have to deliver results at some point.

• I have no idea if Paul Reed is ever going to be a functional offensive player, and his three-point shot off the top of the backboard combined with some "adventurous" dribbling suggests he has a long road ahead of him. But he relished his opportunity to compete against the Nuggets, making energy plays throughout the game to give the Sixers a spark off of the bench.

Defensively, Reed flew all over the place (a few times to his own detriment) and used his length to great effect, impacting some shots around the basket and covering for teammates who missed rotations with a couple of strong late closeouts. He also popped up on the offensive glass throughout the afternoon, slithering through traffic to extend possessions on a night where Philly needed every extra chance it could get.

The key for him is going to be turning the brief flashes where his athleticism is functional into consistent stretches. That very well could just be a matter of changing his role in a healthier version of this Sixers team — if you just ask Reed to set screens and rim run as your small-ish center, you probably get far fewer moments of slapstick comedy. He will benefit a ton from some time in the G-League.

• Say this about the group of low-minute players the Sixers sent out there on Saturday afternoon — all of those guys were ready to come out and compete. During an NBA season, games can often come down to who has more motivation to let it rip on a given night, and Philly carried themselves like a team of guys with something to prove.

It's hard to maintain that energy over the span of 48 minutes when you only have seven guy able to suit up and play, obviously, but after they went into a 10-2 hole to start the game, it wouldn't have been a shock to see them slowly but surely get their butts kicked.

Rivers probably deserves a little bit of credit for all of that, by the way. He struggled last season as the leader of a team with sky-high expectations, but some of his best coaching moments have come as the leader of groups who were counted out only to exceed expectations. With everything that transpired over the last few days, the coach managed to get these guys to play a reasonably competent brand of basketball.

• The Sixers made this a game for the first 24 minutes or so, and that was about as long as they could hold out against a far more talented opponent. The wheels came off for them once the third quarter started, officially putting the game out of reach.

There was only so long Philadelphia could survive with a group of players who were completely unable to separate off the dribble outside of Maxey. The Sixers ended up settling for a lot of junk shots — mid-range pull ups with a hand in their face, tough floaters in traffic, contested threes — that even really good players wouldn't be expected to knock down at a high percentage.

The defense was the bigger struggle, as you might expect for a group that ran out Danny Green at power forward for long stretches of the game. Rivers and the coaching staff tried to mix up the looks at times on Saturday, sprinkling in zone defense at times, which may have been tactical but very well could have just been a method to minimize the wear and tear on players in a game where they only had seven healthy guys.

• Dakota Mathias had a rough day at the office on Saturday, and though his shooting came around a bit in the second half, he's going to have to start flashing a bit more in order to hang at this level. He has shown almost no ability to separate in limited action so far, so unless he's an absolutely lights out shooter, he's giving up too much on D and not offering enough on offense to get minutes.

Of their two-way guys, Reed has a considerably better case to stick around for a while because he's a pretty obvious project they can hope to turn into a contributor. The Sixers have talked Mathias up for what he does in practice (dating all the way back to camp) so we'll see if that ever plays out in an actual game.

• I'm not especially inclined to ride these guys too hard given the circumstances and the group they had available to play on Saturday. They held onto the rope, had some nice flashes, and managed to avoid a complete meltdown even as players were asked to do things they almost never do in NBA games.

However, if the Sixers are forced to run out a group like this again over the coming week(s), they are going to need to do a better job of defending without fouling. Dwight Howard is a fouling machine on his best day, and he was joined by Danny Green in the foul trouble department, limiting how physical two of their better defenders could play in the second half.

Let's hope for everyone's sake they don't have to go through this again.

• You mean, aside from playing the game in the first place?

It's easy for me to sit here and point out that there were a bunch of silver linings from the loss and that nobody should be surprised at how it all unraveled. That being said, when they get to the end of the season and the playoff seeding is set, it doesn't matter whether they picked up an L with their fully-loaded starting group or the seven-man MASH unit they put on the floor Saturday. All the games count the same in the standings.

The Sixers did well to build themselves a bit of padding with the 7-1 start, and it appears they're going to need it, pending how long the team has to play without the services of a huge chunk of the team.