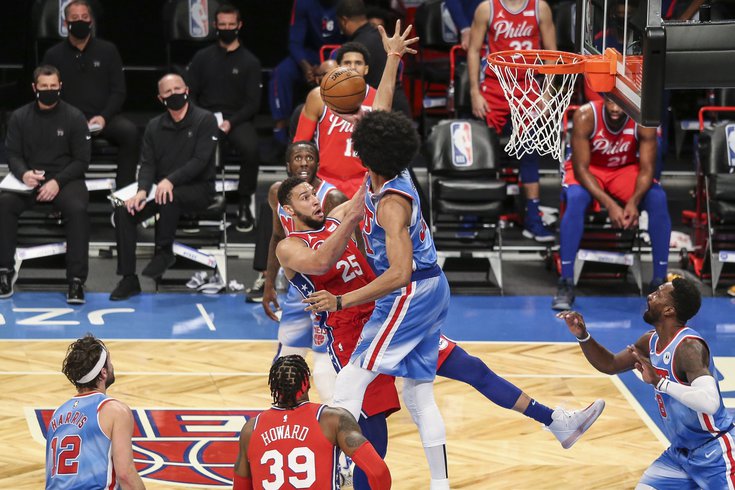 Philadelphia's starters turned in a lackadaisical effort in the second half of a back-to-back, and an undermanned Nets team made them pay for it, knocking off the Sixers, 122-109.

• If there was a positive takeaway from this one, it's the play of Tyrese Maxey off of the bench. The rookie seemed to draw his coach's ire with a heat check shot in the first half, but I for one like the confidence shown by the young man and thought there was a different tempo to the team whenever he was in the game on Thursday night.

in all seriousness, might be a night where they really need Maxey to give them something off of the bench. Good opportunity for a young guy to give them a spark on a back to back with no juice

Rivers went to Maxey early, yanking Shake Milton after giving his sixth man the start, and the rookie made the head coach look smart. In addition to the usual runners and floaters Maxey has made us all expect at this point, Maxey started letting it fly as a pull-up shooter for the first time all season. He wasn't exactly Steph Curry out there, but Maxey seems to flash something new every game, which is a great sign for his future.

The bench combo of Maxey and Milton gives the Sixers a couple of capable pick-and-roll attackers paired with Dwight Howard, who is more than happy to deposit every (okay, maybe most) of the lob attempts thrown his way. In fact, Milton is another guy who deserves individual praise for his game — he carried the Sixers as a scorer during a few down periods and showed off some high-level craft inside the arc, making tough left-handed shots off the backboard at full extension.

I've been a big fan of watching these two play together and offer the Sixers something resembling modern NBA guard play, a rarity for this franchise over the last decade or so.

• Tobias Harris is the only guy in Philly's top three that I think acquitted himself fairly well on Thursday night. He missed some open shots, sure, but he gave Philadelphia consistent effort throughout the game and kept it from being turned into a total laugher as his two top running mates loafed around and contributed nothing of value for most of the game. I'm not going to raise a jersey into the rafters for that performance, but the bar was low.

• The two lead stars were straight-up bad to start the game. No sugarcoating that one, and perhaps we should have expected it on the second night of a back-to-back against a team missing their two best players.

Joel Embiid is not exactly ultra experienced in back-to-back scenarios, and he slept walk through the opening 24 minutes of the game. When he did have the ball in his hands, Embiid was far less decisive and back to some of his old, bad habits, failing to keep the ball moving and putting up some absolute junk while guarded by guys he has torched in the past.

If Jarrett Allen is single-covering him, a baseline fadeaway jumper is not something the Sixers should see on a single possession. Even when he attempted to score from the post, he was sloppy with the ball and seemingly out of control of his body all night, in foul trouble by the midpoint of the third quarter. He made very little effort to move Allen off of his spot, and the offense paid for it.

The clearest sign that his head wasn't in the game was his effort on the glass. Embiid had a fair few plays where he stood flat-footed with no plan, allowing Brooklyn to get second-chance points (or at least get a second look at the rim) that they had no business scoring. If this is the effort he is going to put up on a given night, they'd honestly be better off sitting him. I don't care what the final statline says, that was a poor effort.

For Simmons, the failures were the same as they've been all year. Finishing around the basket was a struggle for the entire first half, as Simmons turned a couple of would-be dunk opportunities into inexplicable, twisting layup attempts, the results of which are easy to guess when he's only sort of facing the basket.

Again, I have to stress this, he is the same player on offense that he has been since he was a rookie, for better or for worse. The major breakthrough is not coming this season, so the likelihood is they will either win because Embiid is unstoppable or run into the same playoff wall they've hit in the second round. People get mad when you point this out, but look at some of his peers around the league. Hell, Timothe Luwawu-Cabarrot, who was terrible in Philly and drafted the same year as Simmons, is hitting off-the-dribble threes for Brooklyn in a bench role.

• What's even more inexcusable on Philly's end is the defensive performance. The Wizards game on Wednesday night would have been easy to write off as an anomaly, because Washington has a lot of offensive talent and had a guy go off for 60 points. No reason to get that concerned about lapses in a game you won and led comfortably in most of the night.

But the Sixers rolled into Brooklyn and kept up the same poor effort and attention to detail, something that should not happen for a team that claims it wants to be the best defensive team in the league. Tobias Harris deserves a little bit of credit for continuing to compete, but they blew assignments, didn't bother to tag rollers, and allowed far too much dribble penetration in isolation.

While we're on the subject, Ben Simmons was first team All-Defense last season. His matchup stats get posted after every game where they can be used to deflect the conversation away from his offensive shortcomings. With Brooklyn down their two best players, all he had to do was keep Caris LeVert down. Bad news — LeVert got where he wanted on most possessions where he was covered by Simmons.

(I could say the same thing about Matisse Thybulle, who is supposed to be some great defensive prospect and couldn't track Joe Harris around screens.)

• If it wasn't acceptable to play down to competition last season, it's not acceptable this season under a new coach who has kept his foot on the gas against a string of weak opponents to start the year. Being on a back-to-back might have been a decent excuse if the Sixers' legs gave out at the end of the game. They were not mentally ready for this game from the moment it started, and it was obvious to anyone watching the game.

I get it on some level. Learning that Kyrie Irving wasn't playing probably took a lot of the juice out of this matchup for them, and they were already prepared for the game with the knowledge Kevin Durant would not play due to COVID-19 protocols.

Again, I have to look at the guys who are supposed to be the leaders of this team. Philadelphia's role players were mostly fine. The bench put in a spirited effort and they did their best to scratch and claw their way back into the game despite playing from a big deficit most of the night. A professional effort from Embiid and Simmons might have been enough to get a win, but Philly didn't get that.

This was a giveaway game, plain and simple.

• The Sixers turned the ball over at a blistering pace for the second straight game, and it wasn't because of anything special the Nets did on defense. Almost every guy in the starting lineup (save for Milton) had at least one inexplicably bad pass that sailed over the head of a teammate out of bounds.

After watching eight games of relatively smooth offense, it was jarring to watch Philly on Thursday night. It's not like they were trying to introduce new concepts on the second half of a back-to-back, so I'm not sure what the explanation could be for so many unforced errors (beyond the obvious "they're tired" excuse).

• I think Seth Curry is pretty damn good, but I didn't know he was so good that the Sixers would fail to look like a professional basketball team without him.

• I'm not going to criticize Simmons for attempting shots I believe he should take, but this nonetheless belongs under this category:

Ben Simmons shot another 3 but it did not go very well this time pic.twitter.com/spmK6tX20k

As always, the jumper is a subplot that I think will become much more important the closer we get to the playoffs.

• Is someone going to tell the TNT broadcast that Taurean Prince is the guy in Brooklyn's starting lineup, not DeMarre Carroll? They didn't seem to realize.