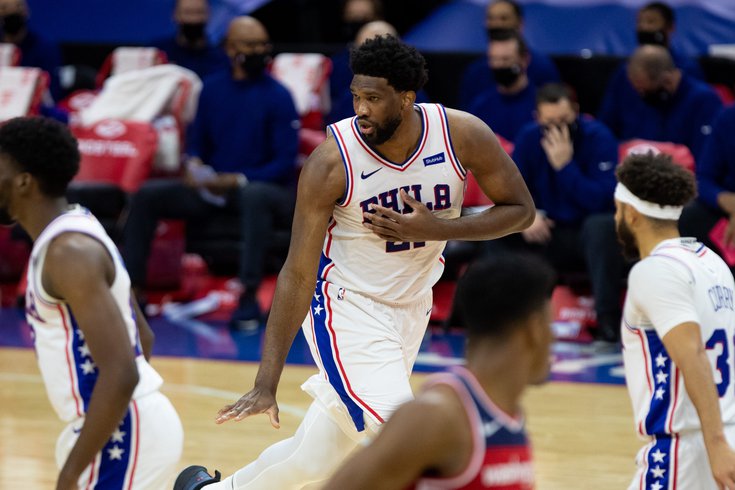 Philadelphia 76ers center Joel Embiid reacts after a dunk against the Washington Wizards.

The Sixers nearly blew a 20+ point lead in the second half, but Bradley Beal's 60 points were not enough to stop Philly from earning a 141-136 win over the Wizards.

• Philadelphia's offense has just been a treat to watch so far this season. Sure, there are possessions where their inexperience together shines through and they look like a team that didn't get a real training camp. But an average trip down the floor is fun to watch for Philly this season, something I couldn't have imagined when we were watching a team that started four different players who wanted the ball in the post.

While some (okay, a lot) of their success on Wednesday night was a result of Washington being a toxic waste dump on defense, these guys are just playing a great brand of basketball. The ball rarely sticks, there are far fewer wasted dribbles and stalled possessions, and even when certain guys have it going, they're still looking to make plays for the good of the group.

Take for example Seth Curry, who came out to start the game absolutely on fire and never relented in the first half, dropping 20 points in the first two quarters. Even in the midst of his heater, there were opportunities for him to call his own number and let it fly that he passed up in order to hunt a better shot for Tobias Harris or Danny Green.

(I'm split on Ben Simmons' decision to reward Embiid for running the floor in the first half. Curry was wide open on the wing and was feeling it, so anyone who believes he should have gotten the ball I won't argue with, but you have to keep incentivizing the big guys when they run.)

They are living the mantra of their head coach, who doesn't care how they score and who scores as long as they are putting points on the board.

• Curry really deserves a spotlight for his play on Wednesday and the insane numbers he is putting up to start the year. He is absolutely going to come back down to Earth at some point — nobody is shooting 50+ percent from three on this kind of volume for an entire season — but man is he forcing opposing defenses to make really difficult decisions.

On Wednesday night, he turned into Philadelphia's unlikely closer in the fourth quarter, shaking off a quiet third period to lead the Sixers at points in crunch time, taking advantage of leaky defense from the visitors. If anything, the Sixers should have made sure to get him the ball more, with Curry getting open for a few swing passes that never actually came his way.

The only criticism I have for him is the same one I have had throughout the opening stretch: it's okay if he plays a little more selfishly. Being a team-first guy is a good thing, but no one would be upset if one of the best shooters in the league threw up a couple questionable shots in the middle of a heater.

• Joel Embiid was off to what looked to be a clunker of a performance at the start of Wednesday night's game, missing his first six shots and botching several possessions in an almost comical fashion. After returning from the bench, he was granted the opportunity to shoot a technical free throw, and that was apparently all it took to change the night for the better.

Five consecutive makes later, Embiid was in the zone, combining the passing that he'd flashed in the opening quarter with the killer scorer's instinct he has in single coverage. This dunk on Thomas Bryant was just disrespectful:

Embiid would come up with 15 points by the time the first half was over, and it was a much more typical night for him on both ends once he found his footing on offense.

It was his insertion into the game in crunch time that really took Philly over the top in the end. The Sixers were hanging on by a thread after the Wizards finally punished them for not killing off the game, and Embiid came in to provide some stability on both ends of the floor.

The big guy's improved fitness level showed up when it mattered most, with Embiid dominating in the paint and still summoning the energy for a huge transition block in the closing minutes of the game. He wasn't the only guy producing on Wednesday by any stretch of the imagination, but there were echoes of games in the past tonight, with Embiid feeling like the only thing standing between the Sixers and a total collapse.

There weren't many rebounds to be had on a night with this much hot shooting, so his line doesn't look like a typical Embiid night, but it was yet another dominant effort. The rampage continues.

• Shake Milton was arguably the player of the (admittedly short) preseason and put on a show on opening night, but he has had a tough time shooting the ball in the weeks since. Coming into the game with a 27.3 percent mark from deep, Milton rebounded in the front end of Philly's back-to-back, a welcome sight with their best player struggling early.

The third-year guard got himself going the old-fashioned way — at the free-throw line and with the in-between game, twisting and turning inside the arc with the help of Dwight Howard to clear a path. Milton was the only guy who didn't completely fall apart from the bench on Wednesday, which is the nicest thing you can say about anyone from the second unit.

• It was interesting that Rivers never seemed interested in having Ben Simmons guard Bradley Beal.

Five years ago, I could see wanting to stick him on a guy like Russell Westbrook, when he was an athletic freak who could compromise your defense. These days, the former MVP is more of a paper tiger, a guy who still does damage but is often more likely to shoot his team out of a game.

I could even understand the initial decision to have Danny Green on him in a like-for-like matchup. But it became clear pretty quickly that the combination of Green-Thybulle offered very little resistance, and what better use for your first team All-Defense guy than to have him trail a guy who is shooting the lights out?

Despite 32 first-half points from Beal, Rivers didn't budge, and Beal kept cooking in the second half, hitting the 50 mark with a few minutes still left to spare in the third quarter. He did it in every which way possible, hitting pull-up threes, scoring on cuts, grifting for some free throws — it was quite an offensive display for a guy whose team was outgunned most of the night.

Philly still outpaced the Wiz comfortably for a while, but the strategy seemed especially pointless because Washington did not really have anything (or anyone) else going, and the Sixers would seem to have a readymade solution for the problem. Wouldn't you rather take your chances with say, Rui Hachimura beating you, a guy who Simmons guarded at times Wednesday?

The Sixers did nothing to stop the onslaught, and if it wasn't for the combination of hot shooting and Washington's awful defense, they might have paid for it. Washington crept back into a game they had no business being in to begin with, and the decision not to make Beal's life more difficult will be a big talking point after the game. At least he finally went cold in the fourth, and if you're being charitable, maybe Rivers was just trying to tire him out in the first 36 minutes.

(By the way, sticking to his guns is sort of the Doc Rivers M.O., for better or for worse. Get used to his kind of thing.)

• All of that being said about the assignment issue, Simmons did not exactly do a whole lot to change the game in the second half as it began to spiral out of control. Rivers keeping him off of the Beal assignment is one thing, but his offensive limitations reared their ugly head after a first-half where he was actually pretty effective as an attacker.

In the opening 24 minutes (and in the final eight or so with Embiid), Simmons was able to control the tempo both in the halfcourt and in transition, responding to several Washington buckets with quick scores the other way. He was active on and off the ball, creating for himself and others. Then halftime hit, and the openings that were there closed up a bit, and Simmons' lack of halfcourt ingenuity with the ball in his hands slowed Philly's offense down to a crawl.

I give him credit for this — he helped Philly get it together in crunch time with some great combination play with Embiid, rediscovering his form when they needed it most. But once again, I thought he was a passenger for too much of the game.

• Philadelphia's defense as a team was not that good even aside from the Beal performance, and it was the first night where I think you could say effort really impacted them. Late rotations, hesitance to fight through a screen, and worst of all, a few plays where the Wizards just outran them in transition and picked up easy scores for their trouble.

On the front end of a back-to-back and against a team they clearly seem to know how to execute against in crunch time, I'm not going to read too far into it. But I have been slightly interested in how they'll fare against high-level guards when they get to the tougher part of their schedule, and this was not exactly a good data point in that regard.

• The biggst culprits in the lost lead were just about everybody on the bench. Outside of Milton, just about every other guy on the second unit was lost at sea against the Wizards. Dwight Howard was ineffective on defense, Tyrese Maxey never had the ball enough to do much with it, and Matisse Thybulle was the unfortunate victim of the Beal show, trying his damndest and coming up way short anyway.

And this was with Rivers staggering his lineups a little bit more because of injuries in the rotation. Tobias Harris and Simmons were the guys who spent time with bench-heavy looks, and neither was enough to prop them up. Ugly night for the supporting cast.

• Fair warning: I wrote the below paragraphs before the Sixers choked away most of a big lead to the Wizards, so yes, there are certainly more negatives than this after that abysmal defensive effort.

When the only real complaint you can muster about a team through their first eight games is that you want to see them prove themselves against some "real" competition, you know they are off to a great start.

Over the next week, they are going to be tested. Thursday's game against Brooklyn is not as exciting with Kevin Durant out, but that game is followed by a meeting with Denver and Nikola Jokic, the upstart Atlanta Hawks, and a pair against Jimmy Butler's Miami Heat. Things are about to get a little more interesting, and I welcome the chance to judge this team against higher-caliber opponents.