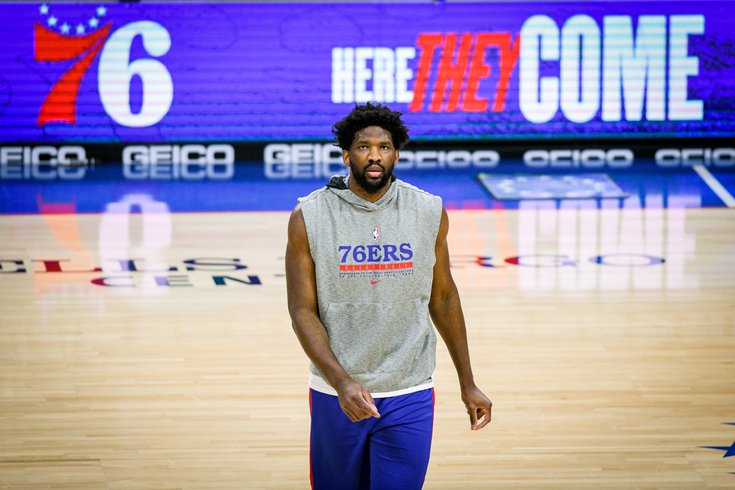 Surrounded by pieces that didn't fit and frustrated at the players the Sixers allowed to leave, Joel Embiid's dreariness during the 2019-20 season was hard to miss. The miserable road efforts, the inconsistent defense, the possesions featuring triple post-ups, those all took a toll on the franchise center, who would eventually voice his discontent on a podcast with old teammate JJ Redick.

New year, new Embiid. The Sixers are 6-1, good for the best record in the NBA, and Embiid has returned to form as a two-way force capable of lifting his teammates night in and night out. There is joy on his face, whether at the podium for a postgame interview or on the sidelines cheering the bench mob in garbage time. And for the first time, there is a love of passing, an understanding of how to attack double teams, and a feedback loop that encourages him to keep getting rid of the ball under pressure.

Through seven games, Embiid looks better than he ever has playing under duress, averaging a career-low 2.5 turnovers per game while serving as the hub of the team in the paint. His success navigating double teams, at least according to the big guy, can be chalked up to nothing more than confidence in the players around him.

"I think it’s moreso that I’ve rekindled with the love of passing," Embiid said when asked if he'd worked on his passing during a short offseason. "Last year at times, [teams would] double and [I'd] pass and you miss a couple — you miss a lot of shots — and it gets frustrating. Then you start thinking oh, you got to do everything by yourself because everybody’s not making shots. This year, I just think I’ve just been letting the game come to me."

The stats and the ol' eyeball test certainly back up Embiid's claims about letting the game come to him. There is a striking difference between how he reacts to pressure this season vs. how he looked against it in the past. If there were questions about how the Sixers would build a playoff-caliber offense around a post-up big as the league deemphasizes players of his ilk, he is beginning to provide answers.

Embiid may not be piling up assists, but the decision to double team him this year is a tougher choice because he's actively inviting pressure. That's on the advice of Doc Rivers, who has stressed from the moment he took this job that scoring would be a team objective, not the responsibility of one player.

"He's a great player. All great players are going to get trapped, whether they’re bigs or guards, and I have always thought it's my job to make sure when they get trapped, we’re in the right spot," Rivers said Monday night. "And we have this attitude: if you trap us, we will score. That's got to be our attitude, and you can feel our guys believing it."

You can see that belief in Embiid, certainly. On easy reads like this kick out to Seth Curry, he has already grown so confident in the supporting cast that he begins celebrating a make by Curry before his teammate even has a chance to let the ball go.

Watch Embiid after he gave the ball up here, knew this one was good before it even left Curry's hands lol pic.twitter.com/XA2zy91SUz

A dump-off to one of the best shooters in the league? This sort of play is an easy sell for the big guy, one that he learned to love when he was flanked by JJ Redick. The tougher thing to drill into Embiid has been getting him to think like a passer on a full-time basis, holding onto his dribble as a last resort or using it to stall until the double team comes.

Embiid has cut down on reckless dribbling and wasted movement by a good amount this season, even when he isn't "rewarded" for it with a made shot from a teammate. The ability for smaller guards to disrupt him disappears when he never starts his dribble in the first place:

The Sixers, Embiid says, have made sure his reads are mostly the same as they've been in the past, and his teammates have done an excellent job of consistently being in the right spots. The Hornets bothered him a bit with weakside doubles in Saturday night's game, but Rivers believes it won't matter where the pressure comes from as long as Embiid knows where he can expect his teammates to be.

"We're trying to put him in spots where he knows exactly where guys are coming from," Doc Rivers said Monday. "And it's not that important for him to know where the guys are coming from, he has to know where our guys will be, and I think Joel is really starting to see, any time they come from any angle, we’re putting guys in spots where Joel can see them and make an easy decision. And he's doing that."

If there is a tell-tale sign that Embiid's passing has actually changed, you need only consider how teams are responding to his play out of the post. A pass fake from Embiid is a credible enough threat that it has caused moments of panic in opponents.

By making the easy plays on a consistent basis, Embiid can inspire second-guessing, and he's already starting to weaponize that with occasional fakes to cutters to open up the perimeter read. Those cutters include Ben Simmons, who Embiid noted is often able to take two men with him to open up passing lanes for him to exploit from the post.

No one should expect Embiid to suddenly be a Nikola Jokic level passer, but his start to the season shows there is a path for him to control games on offense without needing to score 30 or sledgehammer through bodies in the post over and over again.

As much as Embiid is heartened by the shooting around him, there is a flipside to that dynamic — being shown trust from the franchise player is a powerful thing. When players feel like part of a unit instead of a spectator to the one-man show, they're more likely to buy in on defense, more likely to stay with you during a slump, and more aware of making sure you're returned the same courtesy.

Will this last when times get tough and his teammates hit inevitable slumps? Who knows. Better teams will mix and match their coverage in a more dangerous fashion. But if it holds, this is the start of something big for Philly.

"Charlotte is a good team, but when you start playing against contenders, where they make a lot of adjustments, now you got to pick your poison," Embiid said. "Do you want to give up the three or do you want to give up the two? That’s when they might go single coverage, and if they go single coverage, I don’t care who’s in front of me, it’s up to me to score or get fouled or do what I do best."