Instant observations: Sloppy Sixers move to 5-1 with win over Hornets 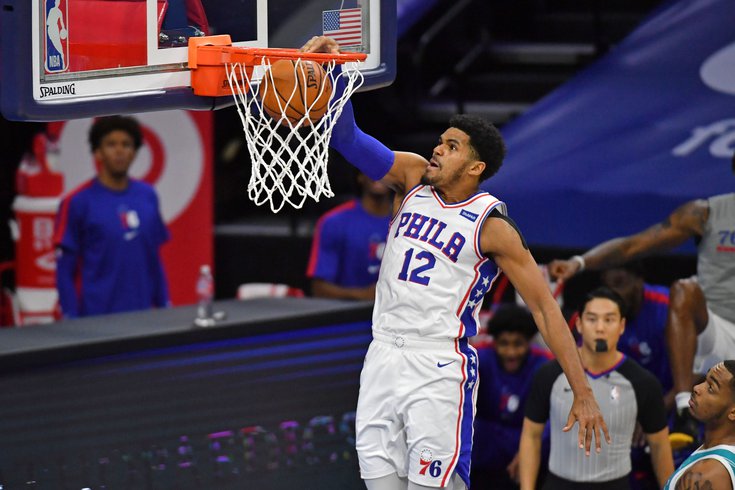 Tobias Harris has been playing fantastic basketball early in the 2020-21 season.

The Sixers meandered through about half of Saturday night's game against Charlotte, but a strong start and excellent shooting powered them to a 127-112 win over the Hornets that was never really in doubt.

• Joel Embiid is off to an absolutely spectacular start for the Sixers, and the more wins Philly can pile up out of the gate, the more likely it is he will find himself in MVP conversations once they begin in earnest.

In the first 8-10 minutes of the game, Embiid had at least 4-5 absolutely insane possessions on defense, always popping up at the right place at the right time to force a wild Hornets shot or a pass to a less dangerous player. His ability to scare smaller players around the basket is hard to miss. DeVonte Graham shot a layup I briefly thought was going to go over the backboard after Embiid made a late rotation to get in his face.

Embiid and Ben Simmons make for a great dynamic duo on defense. As teams try to solve the problem posed by Embiid's towering size and instincts on the back end, here comes the 6-foot-10 hyper-athlete with active hands, the guy who gets into your chest or rips the ball to start a fast break. With Embiid playing higher up in pick-and-rolls and forcing the ball out of the hands of the ballhandler, Simmons' ability to play the passing lanes is highlighted more than ever before.

This was not his best offensive game of the year by any stretch of the imagination, but Embiid is continuing to do the right things when it comes to being part of an offensive unit instead of doing it all himself. There were several possessions where Embiid relocating or sprinting to set a screen helped clear a path for a Philadelphia basket, and when he's not a world-destroying force on offense, he needs to be able to do the little things to lead his team to victory.

• In many respects, this was a Ben Simmons game like most of the rest this year. The defensive highlight reel continues to grow, his ability to set up teammates for open threes is consistent as ever, and yes, his halfcourt scoring is still nothing to write home about.

However, Simmons did seem to do a better job of finding space to cut into on Saturday night, and he did so aggressively, with Charlotte doing a little too much respecting of Embiid's outside shot. He was at the heart of Philadelphia's transition attack, making several excellent hit-ahead passes for fouls or easy points, then showing what he can do with the ball in his hands, sucking in Charlotte pressure only to drop the ball off for easy transition threes.

On top of that, Simmons and the big guy showed solid chemistry together in actions involving the two of them — snug pick-and-rolls have not generated a whole lot for Philly this season, but they seem committed to getting better in that look at the very least. Embiid demanded the ball at one point in the first half before flowing right into one of those plays, with Simmons eventually finding Tobias Harris for a three at the opposite elbow.

• I don't know what got into Harris after a crappy preseason and a brutal opener on Philly's home floor, but it is a night-and-day difference. Doc Rivers has repeatedly stressed the need for Harris to be a quick decisionmaker, and he has followed his coach's wishes, playing decisive basketball at both ends of the floor.

Harris was one of the biggest culprits in Philly's sluggish, disconnected offense last season, and he's one of the biggest reasons it has looked so cohesive over the last week. He's canning open threes in transition, attacking closeouts, or making the extra pass if the shot isn't there, and during the stretches where his shot isn't dropping, Harris is still relocating and preparing ahead of time if/when the ball swings his way.

His most important contribution of the night may very well have been remaining steady as the play of his teammates faltered in the middle of the game. Charlotte came out hot in the early part of the third quarter, and it was Harris who came up with a nice defensive play and then sprinted out in transition to draw a foul. The Sixers were on the verge of shutting the door on the Hornets midway through the fourth, and it was Harris whose help defense created a turnover and led to a Simmons slam on the other end, forcing a timeout from the visitors.

With Embiid and Simmons doing so much of the heavy lifting on defense, the objective has always been to find a third high-level player to ease the burden on offense and make up for some of the gaps in their games. Harris having a nice five-game stretch doesn't mean anyone should be throwing up "MISSION ACCOMPLISHED" banners with the American flag on them, but if Harris continues to play with this mentality, they will be tough to stop.

• The trade to get Seth Curry on the roster is looking like more and more of a savvy move by Daryl Morey as the veteran guard settles in for Philadelphia. Having a guy in the starting lineup who can shoot you out of bad possessions, comfortably step into transition threes dropped off by Simmons, and run the two-man game with Embiid is such a luxury, and Curry fills in a lot of gaps in the offense on top of that.

Several times against the Hornets, the Sixers had possessions stall out and end up in Curry's hands, only for No. 31 to scoot by a Charlotte guard for a nice finish at the basket. Both units have players with that capability now, with Shake Milton carrying the torch for the second unit, a luxury for a team so short on competent guard play over the last 5-10 years.

(Milton was by far the best second-unit player of the night for Philly, by the way. He always seemed to come through with a made basket when things were getting hairy in the second half, and he continues to make a case to join the starting/closing unit with his success in the sixth man role.)

• Danny Green wasn't going to shoot like crap for an entire season, and he was finally able to join the 2020-21 season in earnest on Saturday night.

• Tyrese Maxey was also able to hit his first three-pointer of the season on Saturday night, a moment that had to feel good for the rookie guard and a needed bit of balance to his game. I'm slightly concerned about his ability to finish amongst the trees long-term — he looks small out there when he's attacking the paint — but his touch is so good that might not matter.

• The Sixers apparently thought this game was going to go down the same as the Orlando Magic blowout on New Year's Eve, and they carried themselves as such. Focus has not been a problem for them so far this year, but they drifted through a decent amount of the second and the start of the third quarter before the Hornets served them enough of a wake-up call to get going.

I would put this mostly at the feet of Embiid and Simmons, who each took their foot off of the gas in their own unique ways. Simmons was not as big of a culprit, but his decision-making in the third quarter was particularly suspect, leading to several ugly turnovers on passes that never really had a chance to reach their target. After a great first half taking care of the basketball, he was part of an ugly, turnover-filled third quarter.

The big guy was a bigger culprit for my money. Embiid's intensity on the glass faded a bit, allowing Charlotte to "earn" some extra possessions just by attempting to hit the boards. He is unique among big men for his ability to contest/alter shots and still collect rebounds on top of that, something that perhaps is taken for granted at times, but it makes it more obvious when he's only living up to half of that reputation.

On top of that, he was far more lackadaisical with the ball than he was in any other game this season, allowing LaMelo Ball to pick his pocket on rebounds multiple times on Saturday night. The Hornets ultimately just aren't really good enough to punish Philly for not taking care of the basketball, but he has to be sharper (and has been this season).

That's probably a bit nitpicky because the Sixers led by double-digits for most of the game and it never felt like they were in any real danger. I guess that's what happens when you continue to knock down shots no matter how raggedy the game gets.

• This was probably the worst Dwight Howard game of the season so far, and this is the sort of stylistic battle I think the Sixers should keep an eye on moving forward.

With few healthy big men available, the Hornets have taken to playing guys like PJ Washington at center in bench looks, spreading the floor and pulling people away from the paint. In theory, Howard can take advantage of size mismatches inside and play above the rim in pick-and-roll. The downside is what we watched unfold on Saturday — the Hornets forced him to contest a lot of shots on the perimeter, and Howard's jumpiness got the better of him, leading to some defensive breakdowns for Philly.

Though I am a noted skeptic of Simmons playing center in small-ball looks, this is a game where I think it actually makes sense, relying on his switchability in a scenario where rim protection didn't mean a whole lot.

• 22 turnovers? Now, these are the Sixers I remember!

• This dunk is only ugly if you're one of the guys who was on the receiving end of the hammer. I've been watching Tobias Harris play in person for a while now, and I can't recall him ever having a dunk like this over two people:

On the other hand, this play really drove something home for me — moments like these are just not the same without fans in attendance. Sure, it's enjoyable to see the guys on the bench leap from their seats and celebrate the poster dunk, but the swell of emotion you get from the crowd on a huge dunk is unmatched. These plays can have a real impact on the feel of a game, with one huge play leading to an inspired defensive possession as it all begins to snowball.

Without the crowd, it's still a terrific feat of athleticism, but I miss everything else that usually comes with it.

• Terry Rozier was absolutely out of his mind with some of the shots he was hitting on Saturday night. There were some bad defensive possessions that helped him get rolling, but when a guy is banking in threes in crunch time, it's hard to do anything about that.