Matisse Thybulle, Tyrese Maxey and Dakota Mathias could be the biggest beneficiaries of playing time 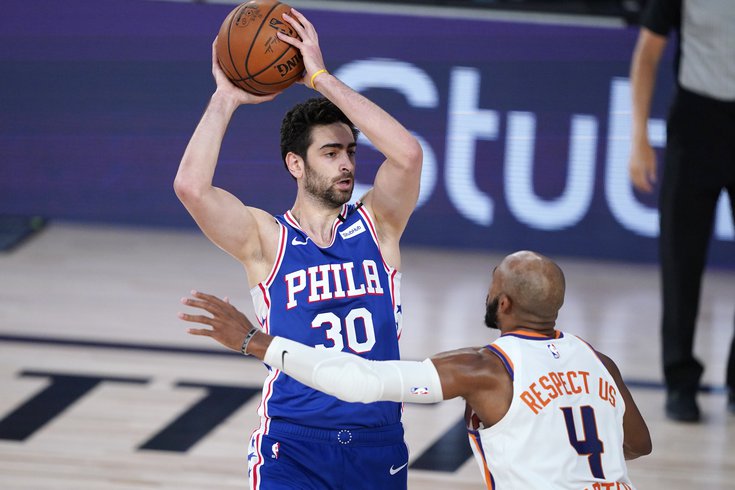 Philadelphia 76ers guard Furkan Korkmaz will be out at least the next two weeks.

Furkan Korkmaz suffered a strain to his left abductor in Sunday night's loss to the Cleveland Cavaliers, the Sixers revealed Monday, and the team's first injury test of the Doc Rivers era will begin Tuesday night against Toronto as a result.

Korkmaz is expected to rest and undergo treatment for the issue (abductor muscles are actually a group found in the upper thigh near the hip), and the Sixers have ruled him out with the expectation he will be re-evaluated in two weeks.

Prior to suffering the injury, Korkmaz was not exactly setting the world on fire — the Turkish wing shot just 25 percent from the field and an identical 25 percent from three in the team's opening three games, playing particularly bad in the back-to-back set against New York and Cleveland over the weekend. But Korkmaz was nonetheless expected to play a pretty significant role to open the season, with Rivers constantly tying his name to sixth man Shake Milton, who is off to a strong start leading the bench mob.

Where Philadelphia goes from here is a subject of some debate. The most obvious candidate for a promotion into the rotation is Matisse Thybulle, last year's rookie sensation who has seen his stock dip some under Doc Rivers. Thybulle has played sparingly through the first three games, stuck behind rookie guard Tyrese Maxey for the time being, but Rivers has insisted his story is far from being written this season.

"Matisse will get his chance, and I tell him that every day," Rivers said after their opening win against Washington. "What I liked about Matisse, you know, you've been around this league a long time, guy hasn’t played all game and you turn to him, a lot of times they'll give you the bad body language. Matisse ripped his [warm up off], he couldn't wait to get in. That tells me a lot about him."

The only thing working against Thybulle is Rivers' insistence on keeping lots of shooting on the floor at all times. Players like Korkmaz who can shoot coming off of screens have typically had a lot of success under the head coach, who is willing to live with defensive warts of certain perimeter players in order to facilitate better offense. Thybulle's home/road splits as a shooter were dramatic last season, and though Korkmaz has not impressed as a ballhandler so far this year, he also brings more on that front than Thybulle, who is best equipped to be a stationary shooter and a cutter off-ball.

Maxey could (and perhaps even should) end up being a big beneficiary of Korkmaz's absence. Already in the good graces of the head coach, Rivers suddenly needs someone to step into a bigger backcourt role over the next couple of weeks, and with Milton able to shift in and out of roles as the team needs it, this could be an opportunity for Rivers to get an extended look at a Maxey-Milton backcourt, with both players able to show what they have on and off the ball.

A strong enough stretch for the rookie could be enough to solidify the young guard in the rotation during a period where the Sixers are still evaluating what they have and how they'll sub it this season. Philadelphia is still working on implementing new plays and getting a new roster on the same page across the board, so more minutes for a savvy point guard would make sense.

If Rivers decides to go with a more like-for-like swap for Korkmaz, it also wouldn't be a shock to see Dakota Mathias get a shot to fill in as a bench shooter and (very) secondary creator. Rivers was encouraged by what their two-way guard showed in training camp, and though garbage time production isn't an indicator for much of anything, Mathias looked good in limited action toward the end of Sunday's loss against the Cavaliers.

Inserting Mathias into that role and keeping everything/everyone else in place would allow Rivers to keep continuity elsewhere in the rotation, something I think he values as he tries to continue introducing new concepts to the group. The same could be said for rookie Isaiah Joe, though it seems he might need to hit the weight room before he can find his footing on an NBA floor.

The only other variable is whether this first injury will cause Rivers to reconsider his policy of not staggering his stars, one of the early trends to watch in Philadelphia. Rivers has continued to lean heavily on all-bench groups early in the season, resting Joel Embiid and Ben Simmons at the same time for most of the first three games, but an injury to a guy he seems to trust on the second unit could lead to some tweaks to their setup. That wouldn't necessarily be a bad thing — having one of Embiid or Simmons on the floor at all times is a goal most people would be happy to see Philadelphia strive for.

The Sixers have a busy schedule over the next two weeks, with eight games over the two-week period Korkmaz is expected to miss, so they should learn plenty about their bench before he (hopefully) returns in full health.