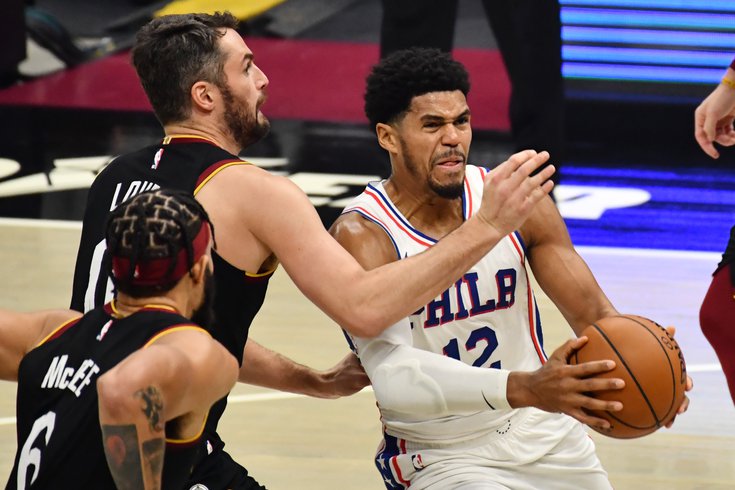 It's a new season with a new roster and a new head coach, but when Joel Embiid isn't available, the Sixers are still drawing dead. Philadelphia got blown out of the water in a Sunday evening matchup with the Cavs, going down 118-94 to close out a rough Sunday for local sports fans.

• You watched the same game I did, not a whole lot of good in this one. Dakota Mathias looked good in garbage time, so he gets the only positive comment of the game from me.

• If there was a singular reason for the Sixers getting clobbered in the first half, it was Philadelphia's decision-making in transition. This is a game where the Sixers should have been able to get up and down the floor with no problem, not having to worry about waiting for Joel Embiid to set up shop. Somehow, it turned into the sloppiest game they've played so far, with guys dribbling into traffic, throwing jump passes instead of attacking the rim, and the Cavs turning the tomfoolery into points the other way.

By halftime, the Cavs had scored 17 points off of Sixers turnovers. Not all of those came on turnovers in transition, mind you, but those were certainly the most frustrating plays for Philly. They're the ones that should be easy, the plays where you have a numbers advantage, but the Sixers somehow screwed them up big time. It did not get any better in the second half, even when the Sixers pulled their starters and the Cavs took their foot off the gas with the game basically sewn up.

I certainly won't pin all of this on one guy because it was a teamwide problem, but we're only three games into the year and Ben Simmons has already turned down an aggravating number of attempts around the rim to throw awkward, risky passes in mid-air. A lot of his worst habits have not changed a bit, and when Embiid is not available, these flaws get a lot more obvious.

He is a good enough passer to get away with it sometimes, but Simmons' lack of commitment to getting to the basket is one of the biggest things holding him back from reaching the next level. That was true in the halfcourt on Sunday, too, even with Simmons flashing what I thought was an improved willingness to get to the line. This was the perfect game for him to put his head down and play selfish, picking up the scoring slack in Embiid's absence.

• While we're on Simmons, I have been hearing for three-plus years now that the Sixers should experiment with more lineups utilizing him as the nominal big man. No matter how many times someone on Twitter says it has the chance to be revolutionary and how "Simmons just needs shooters!" is the recipe for success, we see him play in those lineups and almost never succeed in them.

Look, I don't think it's Simmons' fault that he's not a rim protector on top of everything else he's capable of on defense. But let's be realistic about what we can and should expect out of him, and how the Sixers need to design the roster as a result. Whenever they allow/are forced to go small with Simmons as the biggest guy on the floor, it typically turns into a layup line, and they're not gaining much (if at all) on the offensive end.

Granted, maybe the Sixers should actually try him as a true five instead of letting Andre Drummond go up against Mike Scott. Put more ballhandlers on the floor and spread it out. I don't have much confidence it'll do anything, but at least commit to the style for real.

• Philadelphia's perimeter containment was pitiful throughout Sunday night's game, and the Sixers played a scatterbrained, disconnected game behind those failures. It was a big reason for Andre Drummond's big night at the office — Dwight Howard was forced to help and contest on a lot of drives, and even though he was able to force tough shots and misses, Cleveland's starting center cleaned up on the offensive glass behind him, scoring himself or resetting the offense for one of the Cavs' young guards to attack.

Without Embiid, you could see some of the downsides of bigs playing higher in pick-and-rolls, a style that forces quick reads and great cohesion from the players not involved on-ball. The Sixers were sloppier with their tagging and rotations on Sunday night, and it spelled doom.

A lot of those problems were effort-based, to be clear. And before anyone points out that the Sixers were on the second half of a back-to-back, keep in mind that Cleveland had a double-overtime win on the road on Saturday night, a longer and more exhaustive affair than Philly's win over the Knicks. No excuses for the slop we saw.

• The coaching staff is going to have to get Seth Curry to pull more threes the further we get into this season. He wasn't necessarily shy, but there were several occasions where he had open looks and dribbled out of them, something he should never be doing as long as he's in the league. The three-point line is your moneymaker, so make use of it.

• Offensively, I think the Sixers would take games like these from Tobias Harris almost every night. He had it going from deep, had some nice finds in transition, and although he had moments of hesitation, I thought Harris was decisive when he needed to be, sucking in pressure that he used quite nicely as a playmaker.

It's just hard to shake the idea that even his good games don't actually impact winning. Harris made more individual defensive plays than I can remember seeing him make in any game since he joined the Sixers, and it still felt those were overridden by his brain cramps and miscues as an off-ball player. Whether he's guarding a shooter coming off screens, an athlete who lives off of cuts, or a bruiser who does his work inside, Harris seems to lose more often than not.

This is not some minimum contract bench player we're talking about, he's supposed to be one of the leaders of the team. He would be a perfectly adequate player if he was making $10 million a year. That is unfortunately not the case.

• We noted in our recap of Saturday's win over the Knicks that teams may start challenging Tyrese Maxey to shoot more threes, and the rookie's first three-point attempt came just 24 hours later. Unfortunately, it was an airball, and he wasn't a whole lot closer with his second-half attempt that clanged off of the iron.

Far down the list of concerns for now, but something to watch.

• 2020 has flipped the world upside down, but if you want a sign that things are going back to normal, a Philly sports doubleheader filled with disappointment is as on-brand as it gets.

• Joel Embiid is this team's best player and is likely going to be until the day he is no longer on the roster. Your view of the franchise and what they have to do to become a championship team should start with that idea in mind. There are questions to ask about him as a leading man for a title team, but he sets the floor for this group, drives their defensive success, and is the port in a storm when things are going south and they need a bucket.

While you ruminate on "Who would guard Kevin Durant?" if they traded Simmons, I have to wonder why the Sixers can't stop Andre Drummond and Collin Sexton without Embiid. They don't do a lot of scoring without the big guy, either.

• Furkan Korkmaz was building a house of bricks on Sunday night, his second straight clunker after a poor effort in New York. To add injury to insult, he grabbed at his groin area following a possession midway through the fourth quarter, retreating to the tunnel and remaining out for the rest of the game. When it rains, it pours.