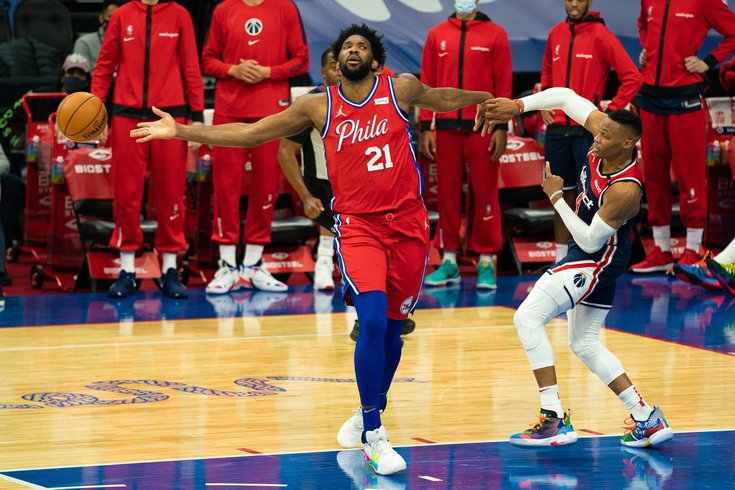 On the opening night of the Doc Rivers era, few things went right for the first 36 minutes. Tobias Harris was a trainwreck on both ends, their new shooters laid brick after brick, and the Sixers starting group didn't make it to crunch time of their very first game together, with Shake Milton having to take over for veteran Danny Green. That was not the plan coming in.

In the fourth quarter, that all changed. It started with Joel Embiid leading a lineup heavy on shooters, and it ended with their closing five attacking the same spot on the floor over and over again. The head coach was pleased his team finally seemed to learn one of his first lessons as head coach — if it ain't broke, don't fix it.

"That’s what you have to do to win games. You fall on a play, and you stay with it until they stop it. I think we scored six out of seven on the same action, and it's great," Rivers said after the game. "I told them, that's what you do, feed the pig. If the play doesn’t, if they can't stop it, keep running it. We did the opposite of that in the first half, where we ran a play and scored twice, and went away from it for five possessions, those are the things that can happen."

For the record, the pig is proverbial, not the big fella. In any case, Rivers facilitated the dominant Embiid stretch to open the fourth by going to a tried and true formula of Embiid plus shooters. Going to work against Robin Lopez and eventually Thomas Bryant, Embiid set up shop on the left block and absolutely went to town against Washington. The Sixers came up with 11 points on five straight post possessions from the same spot (four at the stripe, four from the field, and three from Furkan Korkmaz on a kick-out pass) with Embiid pouring in 15 of his team-high 29 in the final frame.

By the time they'd scored on three straight possessions during that run, it was clear Embiid smelled blood. Putting up two fingers and twisting them in a circular motion, Embiid sent a clear message to the rest of the guys on the floor: run it again. After knocking down a jumper near the baseline, the Wizards responded with two of their own. Trotting out from under his own rim, Embiid made the same gesture, and the Sixers got another two points from the same guy in the same spot.

Calling his own number is something Embiid has always had the ability to do in bench-heavy lineups built around him, but it's not often we've seen him consistently demand the ball in the same fashion, repeatedly bludgeoning the opponent out of the same look. It wasn't so difficult on this occasion, Embiid said Wednesday night, because the supporting cast around him was built to give him space to operate.

Although the head coach was critical of his team's overall performance, he was pleased with the win and happy as could be about the late-game execution. He has a point: Philadelphia played high-level offense in the final frame in spite of new pieces, a new system, and nothing going right for the first 36 minutes, a stretch that included a 15-point quarter in the third and everyone groaning about how things looked the same as they ever were.

One thing that did change: Rivers riding his hot hand(s) as long and hard as he could on Thursday. In game one of a new season, the head coach wouldn't have shocked anyone by going back to Danny Green in the guts of the game despite his rough night at the office. Instead, he offered crunch-time minutes for sixth man Shake Milton, and the third-year guard was excellent in his 2020-21 debut, scoring 19 points on 6-of-11 shooting and playing measured basketball from start to finish. Outside of a pair of missed free throws in the fourth, Milton hardly put a foot wrong all night.

Green, as Rivers was happy to point out to reporters, looked much like his former Lakers teammates did during their opening night loss to the Clippers, a bit out of sorts after a long previous season. Rivers was abundantly clear that he'll afford Green patience to get up to his usual level, but in the meantime, he was happy to ride Milton, in part because he never backed down from the defensive challenge of checking Bradley Beal or Russell Westbrook.

"Offensively we needed to keep him on the floor. And he ends up on Bradley Beal, he does a terrific job, ends up on Westbrook, he holds his ground," Rivers said. "One of the things we talked to him about right before the season started is listen, we're gonna lean on you offensively, but that doesn't mean you get a pass on the other end. And today, or tonight he showed that he wasn't taking a pass, I thought he was terrific."

Coaching is a complicated job with dozens of moving parts, but the most impactful moves are often the simplest. A lot of Philadelphia's success through two preseason games and a single regular-season win can be traced through that mindset. Tyrese Maxey has outplayed Matisse Thybulle, so one is getting minutes and the other is a late-game defensive specialist. Milton has outplayed Green, so one gets elevated into the crunch-time five. Plays work and allow their best players to get rolling, so they run them until the opponent proves they can stop it.

That's not to say the details are irrelevant, or that the Sixers aren't working on wrinkles to add value on both ends of the floor. Take for example their defensive coverage against pick-and-rolls, something they rarely adjusted over the last few years no matter who was playing center or how badly they were getting burned. The Sixers still want Embiid back defending the rim more often than not, but they're throwing different looks at their guys (and thus, opponents) to mixed results.

One sequence that showed potential: this clip that forced a Wizards timeout in the fourth quarter. Rather than dropping when Beal and Bryant ran a middle pick-and-roll, Embiid plays up on Beal, forcing the ball out of his hands and into the less dangerous mitts of Bryant. Simmons steps in and jumps the passing lane, and even if he had played it more conservatively, the Sixers were all in good positions to recover and/or contest no matter where the ball ended up.

Having Embiid chasing guards for 48 minutes is not a viable strategy, but it's a look that has to be worked on now in order for it to be playoff-ready in the spring. These are moments to savor even if ugly patches follow. Being able to put a positive rep like this on film in the very first game will help reinforce that it's a viable strategy and worth the effort it will take to master it.

There was another big change on Wednesday night: Embiid led Philadelphia in minutes, playing the final 11:25 of the game to reach 34:50 for the night. There were brief moments where he appeared winded, but he caught himself and executed down to the final moments, scoring his final bucket with just over a minute to play and continuing the mix-and-match coverage on defense.

"I want to be able to play every single game," Embiid said Wednesday. "And, you know, back-to-backs obviously some games something is gonna happen and you're not gonna be able to go, but the main thing is that I want to put myself in the right position to succeed, and that starts with my body. And once I'm on the court and healthy, nothing, I mean, I don't think anybody can stop me, especially with the different mentality that I have this year."

It was sloppy, but it was a professional, well-fought win in the end. For the opening act? Not too shabby.