Instant observations: Sixers move to 2-0 with comfortable win over Knicks 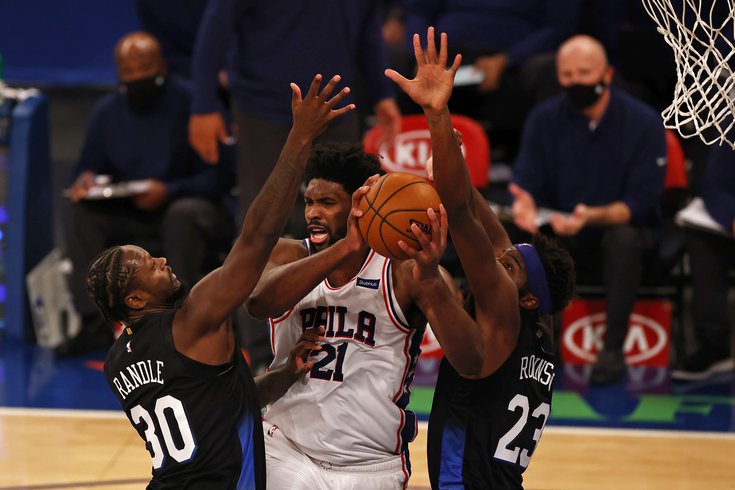 Joel Embiid once again starred as the Sixers won their second game to start the season.

The Sixers earned an easy, professional win over the Knicks on Saturday night, coasting to a 109-89 victory behind 27 points from Joel Embiid and relentless defense from Ben Simmons.

• The most noticeable difference for the Sixers this season (aside from the presence of players who can dribble and shoot) is the increase in activity from Joel Embiid. Throughout training camp, we heard stories of the big man running down the floor in transition and committing to being a more engaged player away from the ball, and he has delivered on those claims beginning with the first preseason game.

Last season, Embiid got his buckets mostly in two ways — creating all of it on his own or by walking into an open three (and even those made a lot of fans mad). He was never all that enthusiastic about being the secondary player or "decoy" in a given set, but he has embraced doing the little things beyond just being a beast on the block. He's not just setting screens for the initial pick-and-roll, he's picking spots to send a second screen if he sees an opportunity to help free a teammate.

It's especially encouraging when those bursts of activity involve Simmons. In the second half on Saturday, Simmons and Embiid seemed more in sync than they've been in roughly 90 percent of the games they've played together. On one possession, Embiid would see an opportunity to free Simmons with a screen and eventually get a layup as a result. On another, Embiid would wave Simmons out of the dunker's spot to clear room for a pass over the top to Tobias Harris in the corner. Best of all, you occasionally see Embiid scoring in transition, including with a tip-in off of a miss in Saturday's game.

Doc Rivers has helped the big man figure out that he doesn't have to be the featured player on a given possession to score on it. He still did plenty of scoring and dominating anyway, with his 20 points in the first half carrying Philly until the rest of the group caught up in the second half.

• Dwight Howard went through a long stretch of time where he was one of the most disliked players in the NBA, so it's a little jarring to see him become a fan favorite (and a positive influence) in Philadelphia so quickly. He certainly deserves it on merit — Howard has been even better than the Sixers probably could have hoped for when they signed him, and as long as he stays healthy, Philly will have a great 1-2 punch at center all year.

Up against an undermanned Knicks team on Saturday, Howard was a man possessed on the offensive glass, shoving aside players and either coming down with a board or drawing a foul when guys like Nerlens Noel tried to keep him from extending possessions. The chemistry of the second unit also looks much further along than it does for the starters, something Howard deserves a bit of credit for — he has done an excellent job of teaming up with ballhandlers Shake Milton and Tyrese Maxey, inside and outside of the pick-and-roll.

Howard even stepped into the way-back machine a few times on Saturday, scoring out of the post as if he was wearing an Orlando Magic uniform. The renaissance is on.

• I don't consider myself the world's biggest RJ Barrett booster or anything, but I do expect him to get off to a better start than 0/9 from the field. Look no further than Simmons as the reason for that horrific performance.

Simmons has become one of the game's truly special defenders by making better use of the physical tools he has always possessed. There's a lot less reckless gambling than there used to be, and he's rarely switched off for a possession, something that haunted him deep into the 2018-19 season. Experience has helped him figure out when to cheat toward the paint a bit to swipe at a driver without swaying too far from his man. Even if he does stray a bit too far, he manages to recover for a quality contest anyway, something Barrett found out the hard way, with the Canadian wing loading up to shoot and suddenly finding Simmons all up in his face.

In the early years of the Embiid era, it was the big guy who had to set the tone on defense or else it wouldn't happen at all. Often times now, that spark comes from Simmons, who made a pointed effort to disrupt the Knicks out of the halftime tunnel. That seemed to get the whole team rolling, and a game that was close throughout the first 24 minutes turned into a laugher.

Anything less than first-team All-Defense would feel like a disappointment from him this season. He's off to a great start on the defensive end and I expect the good times to continue.

• Seth Curry officially announced his arrival to Philadelphia on Saturday night, and perhaps all he needed was the bright lights of MSG to get him going. Having a guy who can shoot you out of a bad possession is a luxury the Sixers haven't been afforded in recent seasons, but Curry has added more beyond that for Philly. The little things an NBA caliber guard can do add up over the course of 48 minutes.

One thing the Sixers have sorely lacked in a post-centric world? Players who can throw solid entry passes to Embiid. Curry has already proven better at that skill than most of Embiid's teammates, threading bounce passes that Embiid barely has to move in order to catch and start his scoring move.

This is a blueprint game for Curry in Philadelphia. He made their best players look better, bailed out the team on a few bad possessions, and wasn't asked to do too much. Good night for him.

• Danny Green continued to shoot poorly but I thought he made/won a lot of 50/50 plays that more than made up for it. You're not going to find effort in transition defense in the box score, and a loose ball he dug out of the corner to save a fourth-quarter possession isn't making anyone's highlight reel. They add up to help win games, though.

• It was hairy for the first half of the game, but this one was never really in doubt from the midpoint of the third quarter on. If the Sixers can casually take care of business against the cellar dwellers of the league, they'll be in good shape in the standings by the time the year ends. We know their stars can get up for matchups against big names and on national TV.

• Tobias Harris not being able to hit open shots is probably annoying to watch but it's something you don't have to worry about as a long-term problem. He will score points in the regular season, and he ended up turning around a tough start on offense on Saturday night in New York.

His effort on defense is another story. Harris was terrible in the opener against the Wizards, and he was even worse against the Knicks on Saturday, the primary reason Julius Randle was able to get going early and carry the Knicks on offense throughout the first half. Randle's first make of the game, a three from the wing, came on a play where Harris stood flat-footed on the edge of the paint while his man collected the ball, a great summation of his effort on Saturday.

While this is a group that has an excuse for botched execution early, Harris should be one of the guys leading on both ends, familiar with Rivers' style from his time in L.A. Instead, the rest of the group looked relatively in sync on defense, and it was only when Harris was involved that they suffered ugly communication breakdowns, leading to several easy Knicks buckets.

Even though his shots started to fall, Harris also continued his long-standing trend of turning wide-open threes into contested two-point jumpers, a trend he might start hearing about from the POBO if he doesn't cut it out.

• When Furkan Korkmaz and Mike Scott are knocking down their three-point attempts, nobody really questions their place in the rotation. But the wheels can fall off rather quickly for both players, and we'll have to wait and see if that leads to any tinkering with the rotation over time.

Korkmaz had a particularly rough first half on Saturday, and while I know in theory he can handle some secondary ballhandling, there's far more negative than positive at this stage of his development. Rivers has sounded excited about his ability to be a secondary playmaker for this group, but I don't think I see it. He's not strong enough to absorb contact on his way to the rim, and that often leaves him in compromised positions, either throwing up difficult shots or off-balance passes.

• With that in mind, it was a little surprising to see Rivers go away from Tyrese Maxey in the second half. Not that I think he has a chance to play over Korkmaz at this point, but the rookie hadn't done anything to warrant being parked on the bench in the second half, and if Matisse Thybulle is going to be thrown into the rotation, I'd almost rather see Philly go small and bump Scott to the bench.

Shake Milton was able to keep Philly's all-bench unit from going too far off the rails, but another ballhandler who can be trusted to attack feels like a necessity if Rivers is not going to stagger his starters all year.

• One trend to watch with Maxey, while his name is in the mix — he had a few possessions where open threes were available to him, only for the rookie to put his head down and attack the basket instead. On the one hand, he's been better than I think you can expect as an off-ball player, a quick first step against closeouts when he gets the hot potato. But I do think defenses will eventually start to play him differently if he doesn't challenge them more from the perimeter, so that's something to watch for the rook.

• Only the Knicks could mistakenly give a player a jersey with the wrong number embedded on the back of it, forcing a mid-game stoppage to get Reggie Bullock in the right uniform. Can't make this stuff up.