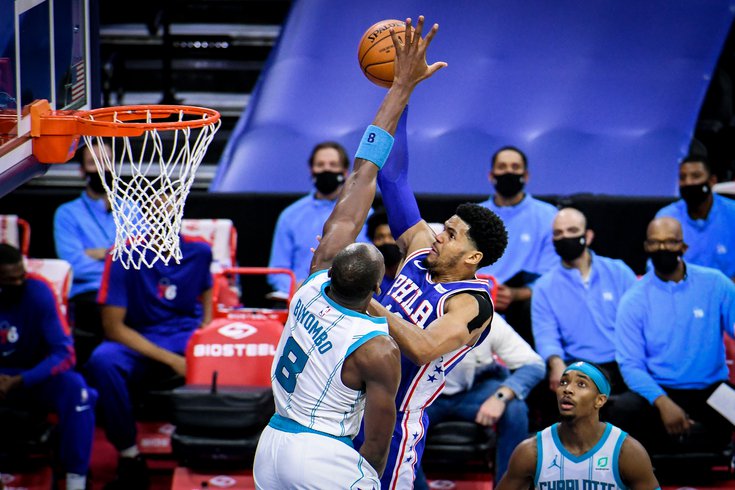 Philadelphia 76ers forward Tobias Harris drives to the basket against the Charlotte Hornets.

The Sixers survived a tough offensive start to earn their second straight comfortable win over the Hornets, a 118-101 win that keeps them atop the Eastern Conference. For the first time in a while, it's safe to say it — the Sixers are pretty fun.

Here's what I saw

• Joel Embiid did not have much going in the first half against the Hornets, missing a pair of open threes and not getting touches for long stretches of the first 24 minutes. It also basically didn't matter, because he absolutely controlled the game on both ends of the floor.

Defensively, Charlotte apparently learned their lesson after trying to challenge him at the rim fairly often on Saturday night. But they overcorrected to an almost staggering degree — the Hornets basically avoided the painted area altogether, creating separation several times before thinking better of it after seeing the big guy looming around the rim.

On the other end of the floor, these are the sort of games Embiid has always needed to find to make the leap to the next level, dominant efforts that come even when he isn't scoring. After getting caught off guard by some weakside doubles in the first matchup, he was ready this time around, and his hockey assists continued to create the best looks the Sixers can get in a halfcourt setting.

Philadelphia closed the first half on a dominant run, and the final few minutes featured an "Embiid and shooters" look with Simmons on the bench, springing the Sixers to a 15-point lead after they slogged through much of the half. Embiid would finish the half a gigantic +21, and you felt every bit of that.

• Ben Simmons' individual defense and general disruption ability have earned him plenty of praise this season, and those traits certainly got their just due during a first-team All-Defense campaign last year. I think his ability to execute switches seamlessly with a variety of teammates has probably gone under the radar, but it very well could be the most important thing for their title hopes.

With Embiid playing up further against pick-and-rolls this season, there have been far more possessions where the Sixers have to operate out of scramble mode. If Embiid and Simmons are the two guys involved in the primary action, however, it's rare for that to even be necessary, with Simmons bending and sliding to blow up plays by any means necessary.

He isn't always the guy coming up with a turnover — though he snags plenty of those — but Simmons is often the reason a possession junks down, or that a bad pass is thrown, or that a clean look turns into a much tougher shot.

• If I were the sort of person who cared about my predictions looking smart at all costs, I would be furiously editing and deleting my preseason claim that Tobias Harris wouldn't look that much different this season. Whoops! Credit to Harris (and certainly to Rivers) for sparking such a quick turnaround out of the $180 million man, who as recently as a few weeks ago looked like a major problem for Philly.

There are far more moments this season where it feels like Harris is seizing the game with his own two hands, and he's doing it without having to be a featured guy or running the pick-and-rolls many thought he would get a heavy dose of under Rivers. One moment he's the guy hitting a clean look from three on a swing pass, the next he's attacking a small Charlotte lineup by sealing off his defender and finishing a lobbed entry from Embiid or Simmons.

Harris' defense has picked up big time as well, in part because of consistent commitment. His agility/foot speed is still going to be a problem in certain matchups, but Monday night he continued a strong start as a help defender, digging in to disrupt a few possessions.

• Seth Curry is just about the perfect glue guy for this offense. It's remarkable how much easier he makes it look to fill in (and find) the gaps on offense than someone like, say, Josh Richardson. The hand-in-glove fit makes it look better when guys like Embiid and Simmons do what they're supposed to do against pressure defense.

Embiid has to be licking his chops knowing he can pass out of a double and almost immediately see the ball in the hands of one of the league's best catch-and-shoot players. Even when Curry doesn't have the space to let it rip, he is bursting past closeouts into pockets of space and managing quite well around the basket.

• As a strategic quirk, I thought the Sixers adjusted well to Charlotte's mix of defensive coverages after coming undone a little bit in the second half of Saturday night's game. The Hornets successfully threw the Sixers off with pressing and trapping in the first meeting, but by the time the second game rolled around, they were prepared to deal with it, using different backcourt players and combinations and still achieving the desired result of a press break.

It's worth noting primarily because this team has struggled with coverage mix-ups like these in the past. The Sixers only had a film and recovery day between the two matchups, so this wasn't something they actively drilled, but they were nonetheless much better prepared for it. Strong reflection of the work they did get done on Sunday, and of the buy-in the coaching staff has early in the season.

• Dwight Howard was one of the only guys who looked ready to play on the second unit Monday night, and the matchup was half of the battle there. After having it taken to him by their small-ball looks on Saturday night, Howard was ready for vengeance, punishing the Hornets on the offensive glass all night long in the second game.

I still think there's merit to trying small ball here, letting Ben Simmons get some reps as the hub of the backups in a switchable look, but hard to argue with the results they got this time around.

• It was an uneven game for Tyrese Maxey, who struggled to get the ball to drop early in the game and earned a talking-to from Doc Rivers after he botched a defensive rotation in the first half. Rather than dropping his head following the teaching moment, Maxey rebounded, and he continues to show promise in short spurts off of the bench.

Whether a pair of made threes put some wind in his sails or not is hard to say, but he had a stretch to open the fourth quarter where he was the most noticeable player on the floor, thriving in a two-man game with Howard and devastating the Hornets with some open-floor play.

The highlight of his night was a terrific steal and dunk combination that sent Philadelphia's bench into hysterics:

(One thing to keep an eye on moving forward: Maxey was part of some guard-heavy looks on Monday, including a lineup that featured a Curry-Milton-Maxey trio that might not be able to guard anyone but could certainly pose some problems on defense.)

• Doc Rivers has started to stagger lineups more with Furkan Korkmaz and Mike Scott out due to injury, using Ben Simmons and Tobias Harris to plug in gaps rather than hoping all-bench looks will continue to stay afloat. That decision makes sense even with a fully-healthy group, but the change to the bench look has come at a cost: shooting is not exactly their specialty.

When you run a lineup on the floor of Maxey-Milton-Thybulle-Simmons-Howard, the open looks you create are rarely going to end up in the hands of a good shooter. Even when the ball finds its way to Milton, he hasn't exactly shot the lights out to start the season, with most of his best work coming around the basket and in connections with the team's bigs.

• Ben Simmons did what everybody loves to ask for and played aggressively on Monday night, getting up eight shots in the first quarter alone and making a pointed effort to get to the rim against a team with very little rim protection. That doesn't change the problems he's up against once he's there — his touch routinely lets him down and he plays smaller than his frame suggests.

I don't want to waste a lot of time on this tonight because it ended up being such a comprehensive win, but I continue to believe this looms as a playoff problem. But it is certainly fair to point out it hasn't mattered much at all so far.

• Teams have not been able to exploit him much yet, but you did see some of the Seth Curry negatives peek through in Monday night's game. Curry is not anyone's idea of a shutdown defender, and the Hornets were able to get him caught on quite a few screens to free whoever he happened to be guarding for an open look or an opportunity to create one for someone else.

Against the teams who like to hunt matchups/switches more ruthlessly — looking at you, Boston Celtics — this is something to keep an eye on moving forward.

• I'm not going to let a pair of comfortable wins over the Charlotte Hornets color my expectations for the season, but I do think we should stop and consider how good the Sixers have looked to start the season in spite of a bunch of changes and all the excuses to look sloppy. Yes, their beatdowns have mostly been of bad opponents, but this is a group that already has a firm identity less than 10 games into the season.

For most people who follow this franchise, this is the team they were hoping for over the last few years. The Sixers are beating the snot out of the teams they're supposed to beat (a back-to-back clunker without Embiid aside), and their lone game against an expected playoff team saw them see through a crunch-time win with tough defense and great execution in spite of poor shooting.

Even when the bench was emptied to end the game, the Sixers still embodied the same offensive style that we saw for the first 43 minutes or so, with gunners like Isaiah Joe passing up shot opportunities to hunt the best shot for the team. This group is in sync, and I'm excited to see what they look like against stiffer competition.

Daryl Morey and Doc Rivers seem to have done a terrific job to bring all of this together so quickly, certainly with some help from well-qualified assistants and the players themselves. The Sixers are sitting atop the East and may buy themselves some future wiggle room with a few more wins to start the year. With COVID hanging over the season, there's no doubt every team in the league will deal with some unexpected hurdles.