Instant observations: Sixers dominate the Magic on the road to close out 2020 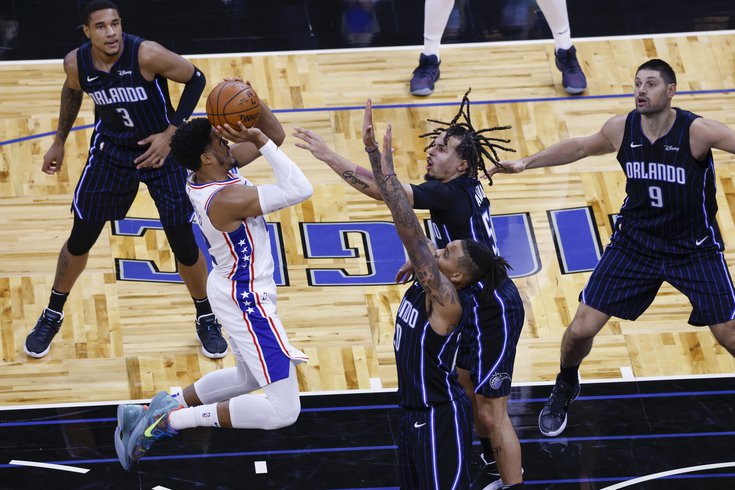 The Sixers took care of business in Orlando Thursday.

The Sixers have had a remarkably tough time in Orlando in recent seasons, but they exorcised some demons in their final game of 2020, scoring a blowout 116-92 win on the road. I hope you spared a few moments of your night to catch this one, because it'll likely go down as one of their best efforts of the season.

• They've gotten in done during closing time to push their record to 4-1, but the Sixers' starters have been somewhat of a mess early in games. The Magic may have been undefeated entering this game, but in years past, this would have been a classic sleepwalking game heading into the new year.

Philly is apparently turning over a new leaf — the opening quarter is the best they have looked by far, and even if they hadn't knocked down shots at an unsustainable rate, there was plenty to like from Doc Rivers' group.

In one-on-one matchups with Nikola Vucevic, Joel Embiid took his man to the woodshed. When Tobias Harris was presented with open threes, he took them quickly without thinking. Seth Curry was on point from deep and had some nice work in the pick-and-roll with the big guy. Ben Simmons? Well, we'll get to his big moment below. Danny Green was the quietest guy in the group, but he was active (and loud) on defense, making sure they didn't give back the lead with poor effort on the other end.

There's a place it all starts from, and a reason I think you can believe in this quarter as a future blueprint for success.

• I wrote about Embiid's success playing out of double teams earlier this week, but perhaps I did not go far enough describing the change from him here. In the past, Embiid passing out of a double felt like something that happened when he felt he had to do it. This season, it feels for the first time in his career as if he's welcoming pressure so that he can release the ball and create an open shot somewhere else.

This is the step in his evolution a lot of people have been waiting for, and it might be as simple as the big guy finally having shooters he trusts around him. Maybe it's mental maturation, maybe it's Rivers getting in his ear, it's hard to say for sure, but you can see from the way he plays that things aren't the same. Where we used to see tunnel vision, we're now seeing Embiid with his head up, dribble intact, ready to fire a pass as soon as someone cheats off one of their shooters.

The big guy was so locked in out of the post in the first half that Orlando tried to double team him in the post when he didn't have the ball toward the end of the second quarter.

Embiid has claimed he is excited for the chance to pass and hit the open man, and while he has talked a big game and then not lived up to it in the past, his actions match his words. Bundled with his rim protection and his scoring, this is MVP-level basketball. Let's see if he can maintain it.

• Simmons shot and made a three with relative ease in the first quarter. No reason he can't do this relatively frequently:

This appears to be a designed look to get Simmons to shoot, and if that's what Rivers has to do in order to get him to start firing, they should keep it coming. The difference between Simmons and most guys with shooting "issues" is that he doesn't have a big enough base of attempts to say he would actually be bad at it. No one is asking him to come out looking like JJ Redick, and these catch-and-shoot attempts are firmly in his wheelhouse, shots that have been a constant in his pregame routine for a long time now.

• If this is the version of Harris the Sixers are getting the rest of the year, they'll be in good shape. I don't particularly care whether he goes through shooting swoons if he plays with purpose whenever the ball is in his hands.

Building off of an excellent game against the Raptors on Tuesday, Harris continued the trend of just letting open shots fly when they came to him, whether that was in a halfcourt set or as the trailer in transition. You don't want to encourage guys to take "bad" shots, but in Harris' case, I think it's actually a positive to see him confidently stepping into threes even when there are bodies around him and there are excuses for him to reset the possession.

As a bonus, Harris continues to compete on the defensive end, digging in as hard as he has since coming to Philadelphia (and really, at any point in his career that I can recall).

• The overall defensive engagement has been excellent for Philadelphia early in the season. It's easy to give Embiid and Simmons all of the credit, and those two are certainly the leaders who make it possible, but players 3-10 in the rotation are considerably more locked in to begin the year than they were last season.

Philadelphia doesn't need every player in the rotation to be an All-Defense guy, they just need engagement. Assistant coach Dan Burke was a master of getting buy-in from players on that end of the floor in Indiana, including previous non-defenders like TJ Warren, and that trend has continued in Philly. The Sixers are getting good off-ball effort from guys like Mike Scott, improved on-ball instincts from Shake Milton, and cohesion across the board in spite of the changes they have made.

Embiid says they want to be the best defense in the league. They are off to a pretty good start.

• Hesitation on open shots appeared to be the only thing holding Curry back during his first few games with the Sixers. Good news — he looks plenty comfortable now.

It has taken almost no time for Curry to find a home in the offense. He's the second man in the Embiid two-man game, the guy ready to rip when the swing pass comes his way, and a plenty capable secondary handler, not capable of carrying an offense but certainly able to punish opponents who sell out to prevent him from shooting threes.

The DHOs that defined Philly under Brett Brown have remained a big chunk of the offense under Rivers, and Curry looks right at home as the guy turning the corner and grabbing the ball from Embiid and Simmons.

• Matisse Thybulle finally woke from his slumber on Thursday night, turning in his best performance of the year to date. That's not saying much — he was basically non-existent in limited run through the first four games — but he finally looked at home with the reworked team against Orlando.

Thybulle played a bit more under control on the defensive end, and that's all he needs to do to make sure he stays in the rotation.

In contrast to Harris, I will chide the second-year wing for taking some questionable shots from the perimeter, and there needs to be far less dribbling even if he barely dribbles at all during a given night. Every time Thybulle puts the ball on the floor, it has the potential to devolve into a slapstick comedy routine.

• When is the last time the Sixers had a group of guards whose skills blended as well as this one? They have the lights out shooter in the starting lineup (Curry), a rookie with downhill speed with excellent touch (Tyrese Maxey), and the combo guard sixth man who gives them a little bit of everything in Milton. They would have been lucky to have any of those archetypes on the roster in previous seasons, let alone all of them at the same time.

• It is refreshing to see the Sixers leap out to a huge lead in the first half of a game and coast to the finish line instead of barfing all over themselves and hanging on for dear life. It makes writing these recaps a heck of a lot easier, too, I'll tell you that much.

• Green shot poorly, Milton was off, Dwight Howard fouled too frequently, and the backups took their foot off the gas a little bit, but meh, this was a thumping. Not going to waste much energy on criticism. Great game overall.

• 2020 was a rough year for a lot of people, disrupting all of our lives in some form or fashion. For me, that was basketball disappearing for several months, only to reappear in a Disney World bubble, forcing the draft deep into fall, all while going from a hyperactive schedule to one where all the work was done from home.

Through all that, I was fortunate to have you all (or at least many of you) on the ride along with me as I was figuring things out on the fly. I can't promise whether our lives will get markedly better because the calendar is turning from 2020 to 2021, but I am grateful for the support I/we get around here and don't take it for granted for a second. Here's to a calmer, healthy, and hopefully much more normal year ahead. Failing that, maybe we'll get some more entertaining basketball.