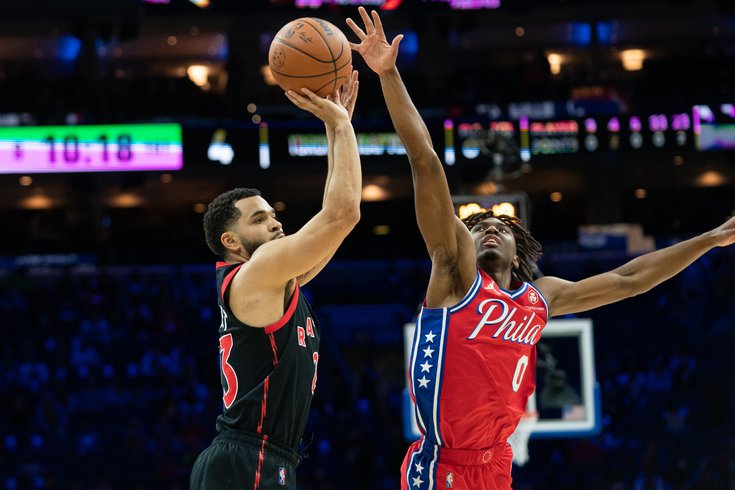 Tyrese Maxey keeps getting better and better on both sides of the ball.

Another 30+ points from Tyrese Maxey were not enough for the Sixers, who dropped their third straight game at home in a 115-109 loss to the Raptors. With a long road trip ahead of them, this one stings just a little bit more than the average loss.

• It has been hard to get too upset about anything happening in the Sixers' universe right now — injuries, COVID protocols, off-court drama — when you watch Tyrese Maxey play and progress every night. He hasn't been perfect, and finding his place within this group when they're full strength is going to be another matter entirely. But he shows a little something more with each passing game, and fans have every right to dream about what the future holds for young Maxey.

Looking back, it's funny to remember the version of Maxey that scored most of his buckets on runners and floaters early in his rookie season. Those shots are still an integral part of his arsenal, but there's so much more variety to his game these days. Scoop layups through contact, hooks around the rim, an increased presence beyond the arc, and the one-dribble pull-up that he looks comfortable with whenever he gets run off the three-point line. There are a lot of tricks in his bag, which helps to alleviate any concerns you might have about his playmaking limitations.

Even with those limitations, Maxey does appear to be making progress as a passer, albeit in smaller steps than we've seen in him as a scorer. He's figuring out how to draw guys toward him before dumping a pass off to a big at the rim or a shooter in the corner, and given the offensive output he's offering as the lead ballhandler, he doesn't exactly need to be John Stockton as a passer.

Being able to score efficiently against a team like Toronto is a super-encouraging sign for a player like Maxey, who is giving up size to basically everyone in their rotation. The more minutes he plays, the more he seems to figure out how to use the tools he has always had. Maxey's speed, which was noticeable in short bursts last season, has been an even bigger weapon this year, with the second-year guard routinely dusting opposing guards and getting into the paint before they realize what has hit them. Theoretical potential is being turned into on-court results.

(Another huge development for Maxey — the ability to put himself on the free-throw line on a regular basis. With Philly's halfcourt offense sputtering for long stretches of the second half, Maxey was able to stop the game and put points on the board a handful of times, allowing a wounded group to catch their breath. I'm not expecting eight-plus freebies for Maxey a game, but regular trips to the line are essential for him to make the leap as a starting guard.)

There's no other way to say it aside from saying that Maxey basically carried this group when it mattered in the second half. The trust the group has in him this early in his career says a lot about who Maxey already is, and perhaps about what he may become over time. Back-to-back 30+ point performances ain't half bad, kid.

• You can see the game slowing down for Paul Reed in real-time, with the second-year big making the most of an opportunity to play real rotation minutes while the Sixers are shorthanded. The usual mistakes you see from bigs figuring it out — picking up cheap fouls, trying to do too much on offense — are slowly fading from his game, and it has allowed him to get the most of the tools that made him an intriguing second-round target.

Reed somehow managed to rack up three steals in just seven first-half minutes, a number that suggests Reed gambled a lot more than he actually did. Those turnovers were caused by length and discipline rather than leaping out into passing lanes, with Reed sitting back in drop coverage and striking when the iron was hot. Using his length without being suckered into a foul, Reed then got out in transition and scored a sweet Euro step dunk without needing to dribble:

How does he factor into the rotation once they're closer to full strength? I suspect he'll be doing more watching from the sideline. But that would be a shame given everything we've seen from Reed recently, and I hope he finds a way to stick.

• When the Raptors went on their big run to surge out to a lead in the second half, they didn't do anything especially inventive or hard to counter. But the Sixers did not meet the challenges presented to them — the Raptors brutalized them with zone defense, beat them on the offensive glass, and outran the Sixers in transition, getting a lot of easy shots at the rim or from beyond the arc by just getting down the floor quicker than the home team.

The zone struggles were particularly infuriating because of how ill-equipped to attack the zone they looked. Some of this was a function of the personnel they had on the floor — Andre Drummond was basically useless in these situations, just standing around doing nothing as the perimeter guys tried to figure it out. The Raptors have the personnel to make things tough on you in a zone, with long, rangy athletes who can close hard on shooters at a moment's notice, but the Sixers made it look a lot tougher than it had any right to.

(Pointing out Philadelphia's current health situation and grueling schedule is not an excuse for some of the issues they've had. There are times when they got pounded on the offensive glass and the issue was as simple as failing to box somebody out after a shot goes up. You have to be aware of how being shorthanded impacts the group, but you also don't ignore the basic fundamentals they're getting wrong.)

• After a good start to this one, Furkan Korkmaz's shot fell off of a cliff, and that made it really difficult for the Sixers to get anything going when he was on the floor. This group was working hard to create a bit of daylight, the ball ending up in Korkmaz's hands with a shooting window he could work with, and a brick-laying parade commenced. And unlike in a lot of other games this season, Korkmaz could not do much to impact the game otherwise, with Toronto's zone stifling any attempts he made to score off-the-bounce.

The last two nights have been games to forget for Korkmaz, and they'll need a return to form from him if they want to pick up some tough wins on the road in the coming weeks.

• Tobias Harris deserves some slack for not being all there after returning from a COVID-induced layoff, and it wasn't all bad for him on Thursday night. Involved as a playmaker throughout the game, Harris could have easily ended up with double-digit assists if a few more of the open shots he created for others had gone down.

That being said, there were some hiccups with the team that you can trace through him. Toronto playing zone defense flummoxed the Sixers for long stretches of this game, and some of that comes down to Harris, who had open shots come his way that he either missed badly or never got up in the first place, hesitating until a defender got in his face and junked up the possession. In fact, even when Toronto was not in a zone, there were some ball-stopping possessions from Harris, who slowed the offense down to a crawl and forced the Sixers to try to create out of some tough late-clock situations.

When Harris is at his best, as Doc Rivers has noted many times, he is playing quick, instinctual basketball and either getting shots up quick or making a decision that will lead to a clean look for somebody on the Sixers. Without an elite creator in this group, the Sixers need to share and move the ball with pace, and Harris struggled to balance hunting his shot with fitting into the team concept in his first game back.

• It's not like the presence of Joel Embiid and Ben Simmons prevents the Sixers from turning the ball over, but there are a lot of moments lately where you look at what's happening on the floor and think to yourself, "That guy simply shouldn't have the ball and dribble this much."

Without picking on anybody too much, let's just say that Danny Green should not be pushing the ball in transition or trying to shoot stepback threes in the corner. A career made on knowing his role has gone off the rails just slightly with the roster in weird shape right now. Dial it back just a bit.

• It was only yesterday that we discussed Maxey's two-way promise after one of his best career games. This was a far cry from that on the defensive end, where Maxey made some uncharacteristic mental mistakes guarding Fred Van Vleet, the most dangerous guy currently on the floor for Toronto.

For most of the first half, Maxey's defensive decision-making was pretty poor, conceding a lot of space to Van Vleet in spite of the shooting threat he poses beyond the arc. Timing help in the painted area has been a strength of Maxey's lately, but there were a few possessions where he dug way too deep and conceded an open three to Van Vleet. That problem continued in pick-and-roll coverage, with Maxey sinking under a screen or two and gifting clean looks to Van Vleet.

(Perhaps the Sixers instructed Maxey to play that way, but I find that hard to believe, given Van Vleet's combination of three-point volume and efficiency.)

Van Vleet has been lighting up plenty of people lately, so it's no real shame that he won the matchup, but Maxey allowing Van Vleet to get rolling early had dire consequences as the game wore on. The kid has a lot on his plate right now, but holding him accountable for basic mistakes is still worthwhile.

• For a guy who has the size and athleticism to come down with as many rebounds as he does, it's remarkable how many shots around the basket Andre Drummond misses. I don't say this to belittle how tough it is to come down with rebounds in traffic as guys are hanging all over you, but you would think by pure accident more of his putback attempts would go in. These are two-footer layups, not extraordinarily difficult runners or jumpers with a hand in his face, and Drummond looks like the sort of guy who could score in these situations through sheer force of will.

• The Sixers getting screwed on Drummond's excellent block with a minute and a half left is a real shame, and shows the limitations of the NBA replay system. Philadelphia's reward for getting the challenge correctly was having to try to win a jump ball despite the fact that they had possession of the ball after the block, and the Raptors hit a monster three on the ensuing possession. Tough break.

• I guess we'll address this one soon enough:

Ben Simmons believes the 76ers’ tactics are worsening his mental health instead of supporting him, and want to deem him mentally fit in order to force him to play.