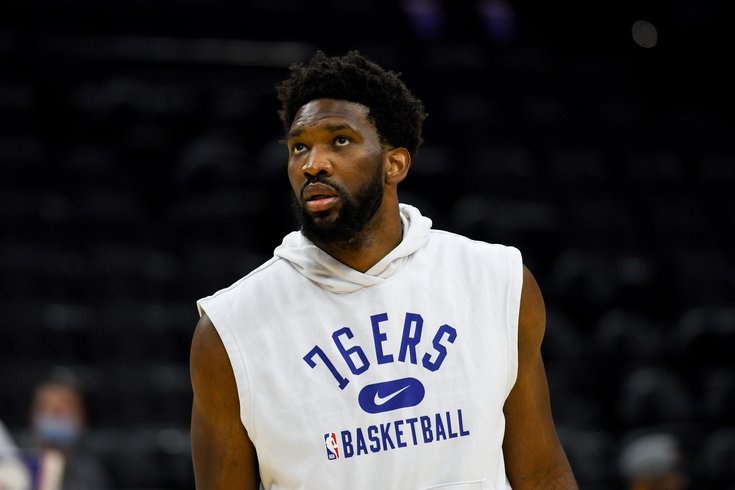 Sixers center Joel Embiid has entered the NBA's health and safety protocols, a source confirmed to PhillyVoice on Monday afternoon. Shams Charania of The Athletic was the first to report.

Embiid had been expected to rest for Monday night's game against the New York Knicks prior to being placed in the health and safety protocols, prioritizing Embiid being available for the second half of their back-to-back against the Milwaukee Bucks. Now, the Sixers face an uncertain week (and perhaps longer) with Embiid out and the rest of the roster unsettled.

This is only the latest blow to the Sixers on the health front, with three other Sixers players currently in the protocols along with Embiid. Tobias Harris, Matisse Thybulle and Isaiah Joe all entered the health and safety protocols last week, with Harris (in theory) the closest to returning out of that group. Even there, Doc Rivers did not have good news to report on Harris' health when he spoke to the media last week, noting that this was not a symptomless COVID experience for Harris.

"He's doing okay but not great, honestly," Rivers said about Harris before their game against Chicago last Wednesday. "It's the most I'm going to say about it, but it hit him for sure. A lot of guys have had this and they are mad like, what the hell, I'm fine. Tobias is not in that category right now, I can tell you that."

A refresher on the NBA's health and safety protocols: a player who tests positive for COVID-19 is expected to miss a minimum of 10 days, save for a scenario where they produce two negative tests back-to-back. The NBA's health and safety protocols necessitate frequent testing for unvaccinated players, while vaccinated players are not subject to regular tests except for in limited situations, such as when players show COVID-19 symptoms or have a known exposure to a close contact with COVID-19. Given the recent positive test for Tobias Harris, there is a logical basis for frequent tests of every Sixers player until this hopefully passes through the team with no major incident or repercussions.

Throughout the organization, other staffers have already begun to receive booster shots of the vaccine, with Charania reporting that players were expected to start getting booster shots this week. Dating back to the preseason, the Sixers have declined to offer firm numbers on the vaccination status of their players, aside from Doc Rivers noting the team felt good about buy-in from the roster.

"I do know the percentage, but I'm not going to answer that," Rivers said at media day. "It's not a concern...we're very, very, very, good, let me put it that way."

After this tough back-to-back against the Knicks and Bucks to open the week, the Sixers play one last home game vs. Toronto before taking off for perhaps their toughest road trip of the year, a six-leg trip that takes them out West, brings them back to Philly in late November, and then sees them play another four games on the road to open December, with the schedule ultimately settling down after that. The Sixers play the Pacers, Jazz, Nuggets, Blazers, Kings, and league-leading Warriors during that initial six-game trip, a run that would have tested their resolve as a team even if they were fully healthy.

There is some good news on multiple fronts. For one, the Sixers have built themselves a nice cushion over the last two weeks, pushing their record to 8-2 behind six straight wins despite noteworthy absences up and down the lineup. Not every win has been pretty, but racking up early victories builds some padding into their record so that they can absorb situations like these, disappointing as they may be. And despite the immediate loss of the big fella, returns from Harris, Joe, and Thybulle will come sooner, potentially beefing up the rotation early in the upcoming road trip.

Even if you squint to see the silver linings, though, it's hard to feel great about the Sixers needing to further tax the players on the shorthanded roster this early in the season. Young or not, it's a lot to ask for guys like Tyrese Maxey to play 40+ minutes to win early November games, and history has shown that long stretches of strenuous minutes come back to bite teams and players later. While it may force them to take a hit in the immediate wins department, the Sixers have to be sure to use the deep bench players they have to keep the men left standing from suffering their own setbacks.